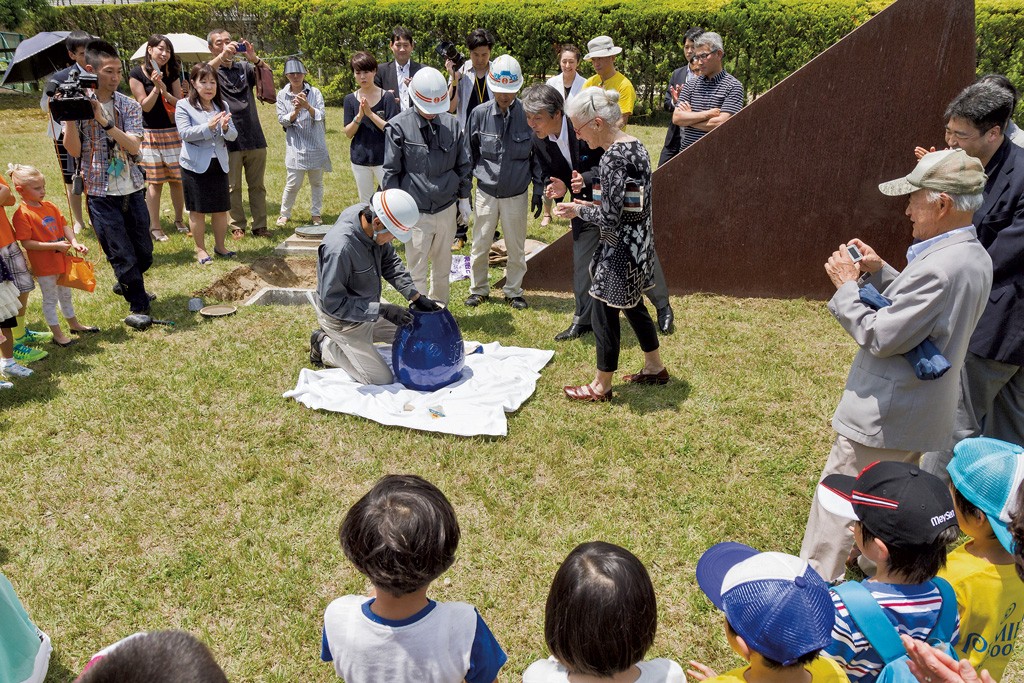 Kate Pond's World Sculpture Project gives a twist to a slogan familiar to many Vermonters: The state's most internationally involved artist thinks cosmically and acts globally.

Pond is in the midst of opening time capsules buried during the past 20 years alongside sculptures she assembled in five far-flung places: Québec, Hawaii, Norway, New Zealand and Japan. Referencing both the past and the future, the capsules contain drawings, ceramics and figurines made by locals who were children when the items were interred and are witnessing this year's resurrections as adults.

Each of Pond's pieces expresses the Burlington artist's fascination with intricate alignments among the Earth, the sun and the stars. Exploring these arrangements by means of artistic creations can lead toward a better understanding of "the workings of the universe," Pond suggests. Visual artists, like poets, often seek to unravel such enigmas, she says.

Her sculptures also act as "an anchor to my being," Pond declares. And the planetary scope of the project attests to her view that "all human beings are fundamentally the same."

Each of the five pieces relates to the cycle of the seasons. Three of them are keyed to the solstice or equinox, and the other two bear witness to the annual appearance of the Pleiades star cluster in the east at the moment the sun sets in the west. This celestial phenomenon is known as the Pleiades heliacal rising.

Pond is clearly preoccupied by the passage of time. Asked why she decided to open the capsules relatively soon after they'd been buried, the 77-year-old artist says simply, "I wanted to have it happen during my lifetime."

The sites for all but one of the sculptures were chosen partly on the basis of Pond's personal connections.

"Zigzag," a steel triangle with a wayward base, was erected in Stanstead, Québec, because "my roots are along the U.S.-Canada border," she explains. That international dividing line is drawn at 45 degrees north latitude, the halfway point between the equator and the north pole, Pond notes. The sculpture is situated so that a shadow cast by one of the upright diagonals of the three-part piece creeps across the horizontal leg during the autumnal equinox in September.

A joint Québec-Vermont commission that promotes cross-border cooperation provided some of the funding for "Zigzag" and its time capsule, which will be opened on September 23, the day when light and dark are in balance. The entire World Sculpture Project cost about $85,000, Pond calculates, $15,000 of which she paid out of her own pocket.

"All One," a 7.5-foot-tall steel construction that thrusts and swoops, was installed in 2002 at Kapi'olani Community College in Honolulu. The sculptor's daughter, Jennifer Robins, was studying archaeology in Hawaii at the time. Shadow play also inspired the placement of this piece, which sits 20 degrees north of the equator. Twice a year, on either side of the summer solstice, the sun stands directly overhead in a solar event Hawaiians call Lahaina Noon, casting a shadow perfectly aligned between the two halves of Pond's piece. The accompanying time capsule will be opened on November 19, around the time of the Pleiades heliacal rising.

Oslo, which lies near the arctic circle, is the site of a 9.5-foot-tall concrete cone titled "Solekko" (sun's shadow). Pond, who has a friend in Norway, angled the piece so that no shadow is cast from its top during the summer solstice. The time capsule related to this piece was opened last month to what Pond says was a generally joyous reception among the thirtysomethings whose artwork had been buried in 1996. Not everyone was celebrating, however. One woman clutching a 19-year-old drawing noted that it was made by a friend who had committed suicide, Pond reports.

"Himeguri" functions as a straightforward, large-scale sundial that incorporates two sets of stones — one curved, one straight — as well as a nearby lamppost. Pond built it in Sendai, Japan, with financial assistance from a foundation associated with the Mitsubishi automotive conglomerate. Her son, Christopher Robins, was attending graduate school in Japan at the time.

The time capsule that's part of "Himeguri" — which roughly means "days passing like turning pages of a book" — was opened on July 13, a few weeks after the summer solstice. Some of the unearthed artworks were returned to the capsule, which was then reinterred. It will remain buried for a yet-to-be-determined period.

New Zealand was the one leg of the World Sculpture Project where Pond had no established contacts to lead her to potential sponsors and sites. She posted a notice on her website asking for help. Lew Bone, a Kiwi with a shared interest in COR-TEN steel, responded by suggesting an appropriate location might be the Mapua School in Nelson, New Zealand's geographic center point.

Pond proceeded to assemble "Telling Stones," another sundial — but one that relies on a human figure to project a shadow onto a circle of boulders. This piece pays homage to the Maori culture through an alignment that marks the Pleiades heliacal rising, a phenomenon familiar to the ancient Polynesians. The corresponding time capsule is set to be opened on December 4, near the time when the constellation and the sun do their yearly do-si-do in the southern hemisphere.

Pond says the sculptures she creates are site-specific. That's true for each of the pieces in her World Sculpture Project, which stand far apart in locales chosen for their specific geographic properties. What connects them is Pond's determination to give aesthetic expression to the relationship between the Earth and the universe.