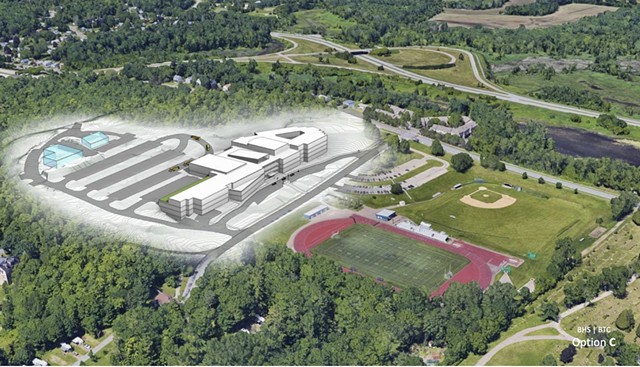 At a special board meeting on Wednesday night, Burlington school commissioners unanimously selected a conceptual design for a new high school and tech center, a large and costly project that the school district hopes to complete by August 2025.

The chosen design, known as "Option C," is the least expensive of five proposals architects presented to the school board earlier this month. The three- and four-story building, which will be built where the existing high school is, could cost around $181.3 million.

Architect Presents Conceptual Design Options for New Burlington High School
By Alison Novak
Education
The building is energy-efficient, cost-effective and can be built on the district's aggressive timeline, Superintendent Tom Flanagan said. The chosen design also provides flexibility in space and incorporates light and the natural environment, Flanagan wrote in a board memo. Option C also edged out the other designs in a community survey.

Several of the other design options would have allowed the district to use the existing high school's Building A — which houses a kitchen, auditorium, gymnasium and locker rooms — while the new building is constructed. But Option C will require the demolition of Building A at the start of construction. That means the school district will need to find or rent temporary facilities for food preparation and some sports practices for multiple years.

In a memo from architecture firm Freeman French Freeman, president Jesse Beck said the design team believes other solutions are possible, such as using existing Burlington School District facilities or other spaces in the city. Before the board vote, Commissioner Martine Gulick spoke about the district's rocky road since it was forced to shutter the high school in the fall of 2020, when elevated levels of airborne polychlorinated biphenyls (PCBs) were found on campus. Since March 2021, students have been learning at a temporary school in a former Macy's department store in downtown Burlington. "It’s a big night. I’m feeling the emotion," Gulick said. "I want to roll the tape back in time ... There were many, many mornings when I would drive to work with tears in my eyes because our kids had nowhere to go. What was troubling was that there was no outcry. I wasn’t hearing from folks who were coming in to help ... So I’m sitting here tonight, and I’m thinking how far we’ve come as an organization, as a group, as a district."

During public comment, though, several people raised issues about the district's plans for the new tech center.

Chuck Lacy, the former president of Ben & Jerry's and a member of the Mount Mansfield Unified Union school board, spoke about Burlington's responsibility to districts that tuition students to Burlington Technical Center. "The majority of BTC students come from outside of Burlington ... and we pay the majority of the bills," Lacy said.

Lacy, cochair of the Regional Advisory Board for Chittenden County's technical education centers, urged the school board to choose a conceptual design option that "offers a longer timeline to develop a proper regional plan for technical education."

"If you want to optimize a building for your own vision, that's OK," Lacy said. "You should build it on your own, and be on your own and assume that risk."

But Flanagan, as well as the project architects, said that the conceptual design is just one phase of a much longer planning process, and there will still be opportunities to refine the specifics of the tech center.

"When people look at these plans, it really looks like they're firm and solid and cast in stone, but it's not," said Beck, of Freeman French Freeman. "It's really about how the [buildings are] located on the site, the massing of the buildings, the general shape of the building, how it relates indoor to outdoor space ... Inside the building is where we have flexibility, and that's in the next phase of the project."

Board chair Clare Wool said that the school board and Flanagan are committed to collaborating with other districts in planning for the tech center.

According to a timeline shared at the meeting, architects will work on a schematic design — a more detailed, room-by-room drawing — over the next few months. This summer, they will present the schematic design to the school board and prepare a cost estimate. The district plans to put a bond for the project to Burlington voters in November.