Since early 2021, chef-owner Ahmed Omar of Burlington's Kismayo Kitchen has made more than two dozen short cooking videos and posted them on his YouTube channel, Chef Kismayo.

In the well-paced tutorials created with local photographer Oliver Parini, the camera focuses mostly on Omar's torso and hands as he chops, blends, air-fries and sautés. Like the menu at his restaurant, the recipes are multicultural, to use Omar's word. They range from mainstream American offerings, such as a chicken-and-chopped-salad wrap, to oven-baked sambusas, the Somali version of samosas.

On YouTube, culinary how-to heavyweights such as British chef Jamie Oliver and Babish Culinary Universe (which was born on the platform) boast close to 6 million and 10 million subscribers, respectively. In comparison, Omar's following of nearly 8,400 is small potatoes — but he has big plans.

Before he opened his restaurant in 2019, Omar, 34, worked as a personal trainer and offered online health coaching. His Snapchat account, Ahmed-kismayo, has 53,000 subscribers, and he is working on encouraging those fans to migrate to YouTube and his TikTok account, chef_kismayo2020.

"I want to go over the whole world," he said on a recent Tuesday afternoon, sitting down for a rare moment when Kismayo Kitchen was closed.

Omar recognizes that he may need to make some minor changes to accomplish that goal; namely, he is considering adding English subtitles to expand his audience.

In his current library of videos, Omar delivers a constant patter of explanation in his native Somali, peppered with occasional English words and phrases: "The secret is..." "Look at that color. Gorgeous, beautiful!" "My point is..."

"It's how I'm talking to my kids, how I talk to my family," Omar said of the mix of languages.

Even for those who don't speak Somali, Omar's energy and enthusiasm need no translation. The finer points of a recipe may be a little harder to ascertain.

A fan named Nazia commented on the sambusa video: "I'm not Somalian and I don't understand the video, but I truly support everything you do ... I love how passionate [you are] and the effort and care you take in everything you do." 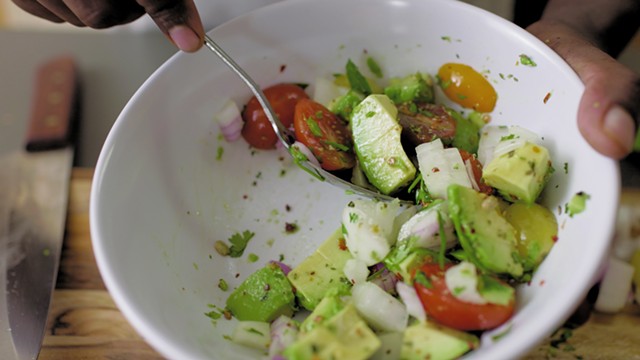 Omar said his original aim was to help fellow Somali cook healthier food. A competitive bodybuilder, he believes in the power of a diet of lean protein and vegetables with minimal simple carbohydrates.

In Somalia, he said, "It is tradition to eat more carbohydrates. That food can sometimes make you sick." For Somali who now live in the U.S., he said, "It's worse because companies make junk food.

"I just want to show them how to cook healthy stuff," Omar said. "When God gives you skills, you're gonna share with your people. I just want to teach them. In 10 minutes, I can help save their life."

Omar's immediate goal, he said, is to reach 50,000 to 100,000 subscribers, at which point he'll be able to generate meaningful revenue from his YouTube channel.