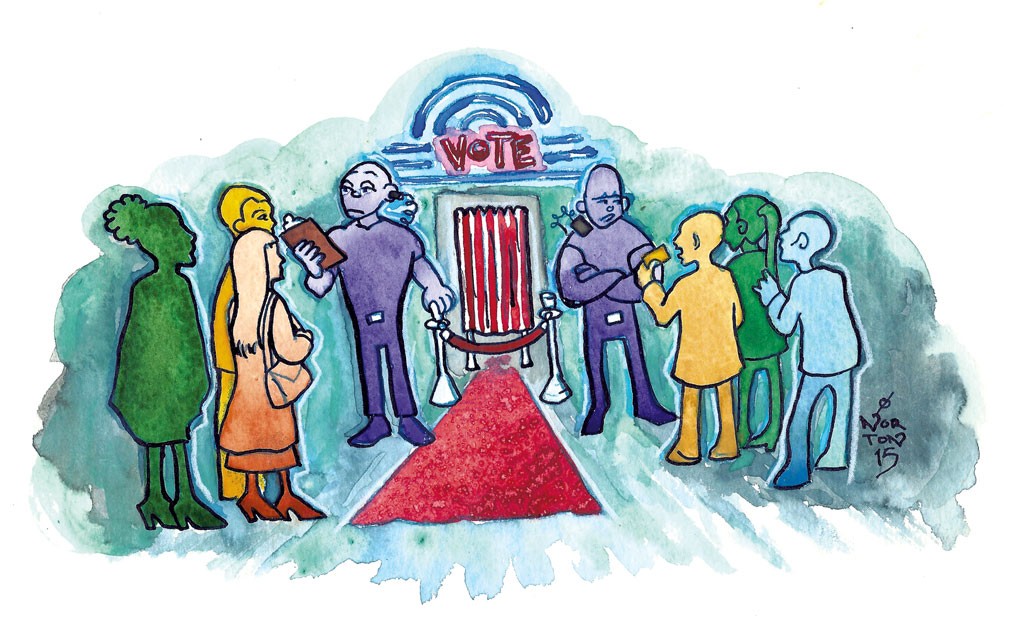 In 2007, an Italian ecologist led a group of local immigrants in trying to convince Burlington residents to allow people who weren't U.S. citizens to vote on Town Meeting Day. The proposal elicited reactions so vitriolic that the group disbanded.

By the time Brennan brought the proposal up again in 2014, things had changed: All but two councilors agreed to put the question on Burlington's ballot this March. The once-ambivalent Mayor Miro Weinberger supported the decision, too.

How did a nonstarter issue turn into a political possibility? A 24-year-old Bhutanese refugee, a few persistent Progs, a consultants' report and an unnamed Canadian citizen all played a role.

Burlington is home to roughly 1,900 "noncitizens" — 4.5 percent of the city's population, according to the U.S. Census. The term refers to legal residents — people with Green Cards or shorter-term visas — who haven't been naturalized. Obtaining citizenship can take more than a decade for some foreign-born residents; others are reluctant to renounce citizenship in their country of origin.

Marta Ceroni, a Milan-born Italian citizen with a PhD in forest ecology, moved to Burlington in 2002 to work at the University of Vermont's Gund Institute for Ecological Economics. Ceroni calculated that it would take her nine years to become eligible for a Green Card, and another five to obtain citizenship.

During that time, Ceroni was frustrated at being excluded from what she calls the "distinctive participatory democracy that Vermont is famous for." In 2006 she started the Vermont Immigrant Voting Alliance — a small group of mostly her colleagues, including an Australian history professor and a German biophysicist. Former Progressive city councilor and state legislator Terry Bouricius gave them political advice.

VIVA didn't receive much attention until members staged a mock election on Town Meeting Day in 2007. With the city's permission, they cast fake ballots in a fake booth at an actual polling location. It garnered stories on Vermont Public Radio and in the Burlington Free Press.

Then came the backlash, according to Ceroni. The news coverage generated harsh online comments, like "Only AMERICANS should vote in AMERICAN elections ... If they don't like how we spend tax money, then get the hell out." Taken aback by what felt like personal attacks, the group gave up. Ceroni, who moved to Norwich in 2010 and is in the process of applying for citizenship, still keeps copies of the press coverage and the online comments.

In 2011, two Progressive city councilors — Brennan and current party chair Emma Mulvaney-Stanak — picked up where Ceroni left off. But the lack of council support was so apparent that they didn't bother requesting a vote. "There wasn't much interest," Mulvaney-Stanak recalled. "Bob Kiss was a lame-duck mayor," she said, and attention had turned to the mayoral race between Weinberger and Republican Councilor Kurt Wright. On the subject of noncitizen voting, neither candidate had much to say, except that they weren't sure how they felt about it.

Mulvaney-Stanak stepped down in 2012, but her Progressive successor, Rachel Siegel, became a convert to the cause, even before getting elected. "I became acutely aware of the issue when I was campaigning three years ago and going door to door," Siegel said. "When I would get to a door and the person who answered it was clearly from another country, I would have this knee-jerk reaction of, 'I shouldn't waste my time here,' and then I would immediately have a reaction ... of horror."

City officials experienced similar discomfort last March, when Jeetan Khadka applied for a seat on the Parks & Recreation Commission. Khadka, who spent 17 years in a Nepalese refugee camp after fleeing Bhutan, wanted to encourage the department to reach out to New Americans.

Sitting in his office at Spectrum Youth & Family Services, wearing a black polo and bright green pants, Khadka recalled one time cops busted a pickup soccer game on a field at the private Mater Christi School. The group of young Old North End players had no idea they were trespassing, according to Khadka, who was cool-headed but clearly indignant as he described the incident. No other field was close enough to meet their needs.

City officials told Khadka he didn't qualify for the commission because he wasn't a citizen, but he applied anyway. "I wanted to make sure my voice had been heard," he said.

It was. When the council started discussing the issue, it discovered that the city ordinance allowed noncitizens to serve on certain boards — such as the Development Review Board and the Housing Review Board — but were barred from many others. "It absolutely is clear that it makes no sense," said Councilor Wright recently.

Weinberger came to the same conclusion when interviewing candidates to head his departments — he wouldn't reveal details, but in one case the mayor said that the most qualified applicant was a Canadian whom he couldn't hire.

The discord led councilors to unanimously approve a separate question for the March ballot that will ask voters if Burlington should allow noncitizens to work as department heads and serve on all city boards and commissions. Unlike noncitizen voting, the charter change would not require an amendment to the state constitution.

Planning documents are often dismissed as filing-cabinet fodder, but Siegel, Brennan and Weinberger agree that Burlington's Diversity & Equity Strategic Plan influenced the debate, too. Drafted by independent consultants last spring, the report recommended what the Progs had been pushing for: that the city allows its noncitizens to serve on commissions and boards, and permit them to participate in local elections.

On the latter, the mayor and some councilors were more conflicted. "I wasn't sure what to think about it," Weinberger recalled Wednesday. "It definitely seemed like an interesting question, and I certainly saw points on both sides."

Siegel seized the political opening to argue that allowing noncitizens to serve on boards without letting them vote for the officials who appointed them would amount to "tokenism." She remembers making that point to the mayor in a 20-minute phone conversation before the vote. "That was the turning point ... He went from maybe to yes."

The far-left councilor had clashed with Weinberger repeatedly over diversity and equity issues. "That phone conversation was one of the highlights of my experience on city council," Siegel said.

When explaining the evolution of his stance, Weinberger didn't specifically mention the phone call, but he did cite Siegel's logic. "As I think Councilor Siegel has stated quite forcefully, it feels like a contradictory position to say ... people can volunteer their time in the community but we are not going to let people vote."

On January 11, in his first campaign speech of the season, Weinberger laid out five goals to the crowd of Democrats who had just voted to endorse him for a second term. One was to make Burlington "a city of inclusion and opportunities for all." He didn't mention voting, but he did cite the effort to open up city leadership positions to noncitizens.

The mayor's position isn't the only one that has evolved. In the past, Councilor Norm Blais has spoken passionately about preserving voting as a right exclusive to citizens. Citing his parents — naturalized French Canadians — he's argued that "voting provides an incentive for people to become citizens, and I think that to the extent that we can incentivize that ... we should." But Blais said he's come to realize that's not necessarily true for Queen City immigrants. He confesses that he's unsure how he'll vote in March.

Sandrine Thibault, a Québécois who has worked as a city planner for the last seven years, argues the opposite effect: Voting in local elections could make immigrants more inclined to seek citizenship because they'll want to participate at the state and federal levels. Here on a work visa, Thibault helped create Burlington's climate action plan and planBTV.

Maleka Clarke is a registered nurse and single mother who describes herself as a "ridiculously involved parent." In her spare time, she serves as president of the parent-teacher organization at the Sustainability Academy at Lawrence Barnes and sits on the governor-appointed Building Bright Futures council.

After Burlington voters rejected the school budget last year, she distributed fliers encouraging people to support the schools. Her 9-year-old son has Down syndrome, so she was especially concerned about preserving para-educator positions.

But Clarke wasn't able to cast a ballot in the second vote; she moved to the U.S. from Jamaica as a teen and had never felt compelled to apply for citizenship. When the budget passed by a thin margin of under 70 votes, "That was the first time when I wished I could do something," Clarke said.

Despite increasing support for noncitizen voting, Blais issued a warning to the council on the night they approved both ballot items: "You shouldn't be deluded by what you hear this evening. There are plenty of people out in the community who have strong reservations about this matter." Michael Ly, a Republican campaigning for a council seat in the New North End, is one of them. The American-born son of Cambodian refugees advocates against the measure, pointing out that no other state allows it.

Infinite Culcleasure, a Progressive community activist, started researching the issue roughly a year ago. He notes that Vermont's original constitutions of 1777 and 1793 allowed noncitizens to vote, and that places like Tacoma Park, Md., and Amherst, Mass., currently allow it.

Supporters of the measure are trying to bring as many Burlington residents on board as possible. "The wider the margin is, the more likely the state is to consider it," Siegel said. They've formed a fundraising group called I Vote Vermont, and they're hosting two public discussions during the next several weeks.

Culcleasure and Brennan have given presentations about noncitizen voting at every neighborhood planning assembly and are making the rounds at PTO meetings. Burlington residents "have been bragging about how diverse our community is," said Culcleasure, who is black. Letting everyone vote, he argues, is a way to capitalize on that.

Martin Baumann is a German father of four who moved to Burlington in 1998 to work at a machinery company in Milton. Baumann, who applied for dual citizenship but was denied, participated in VIVA's efforts to win voting rights nearly a decade ago. "If any town can make this happen, it might be Burlington," Baumann said.

Khadka, who's lived in Burlington for seven years, wasn't about to wait for councilors and voters to warm to the concept. As of last summer, he's a U.S. citizen with a spot on the Parks & Recreation Commission, where, he points out, he's the only person of color.