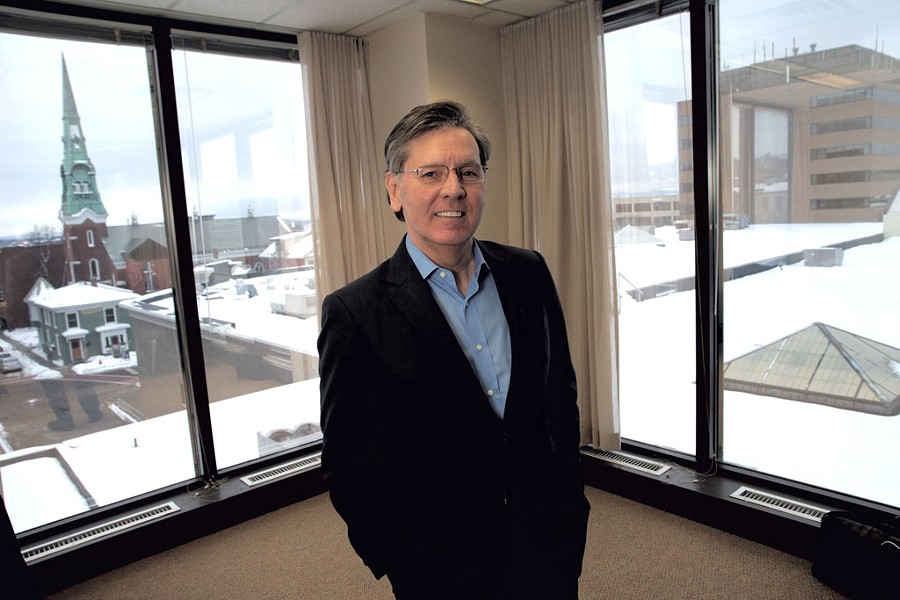 Last month, the new owner of the Burlington Town Center unveiled a $200 million plan to redevelop his property. What's more, Don Sinex promised to work hand in hand with the city to bring its much-maligned downtown mall up to date. "I'm here to listen," he told the city council repeatedly during its December 1 meeting.

If the project moves forward, it could be the biggest single private investment in Burlington history.

"How could you not get excited when someone is willing to invest that money?" asked Kelly Devine, executive director of the Burlington Business Association — a view shared by numerous city leaders.

But others — particularly Progressive city councilors — are urging caution in their emerging role as watchdogs of the Weinberger administration. "We shouldn't do this just because he wants to invest $200 million," said Progressive councilor Jane Knodell.

Along with fellow Progressive councilors Selene Colburn and Max Tracy, Knodell recently sent 19 questions to Mayor Miro Weinberger asking about the city's role in the project and requesting more details about Sinex himself.

The subtext: Who is this guy? And how do we know he'll actually listen?

After college, Sinex served as an officer in the U.S. Army's Ordnance Corps, charged with overseeing weapons systems; he said he got out early because the Vietnam War was winding down. He returned to school, earning law and business degrees before joining the large Chicago-based real estate investment company JMB Realty. He later started a New York office for JMB and worked there until he founded Devonwood Investments, in 1997.

The small New York firm is staffed by a coterie of investors he's known for many years, including his son. Devonwood doesn't specialize in any particular type of development; it invests in everything from high-rise office buildings to multifamily housing projects.

Asked by Progressive councilors for examples of his previous work, Sinex provided a list of eight projects, some of which date back to his time at JMB. Five were in New York City, including a $450 million office building on Park Avenue. His portfolio also includes a 650,000-square-foot shopping mall in Delaware and Copley Place — a mixed-use project in Boston that involved a public-private partnership.

A 1971 graduate of the University of Delaware and divorced father of two, Sinex won't divulge his age. "I will tell you that my hair is graying, but it's not quite as gray as my age would suggest," he said. Even with snow on the ground, he dresses more New York City than Rutland — his swept-back, mostly-black hair matches his wool coat, scarf and well-shined shoes.

Sinex was looking for a place away from New York — maybe New Hampshire — when he saw an online listing for a house, surrounded by mountains, in the Rutland area. He bought it in 1997 and says he spends about 70 percent of his time there. "The only reason I'm interested in doing this is because I live in Vermont," he said of the mall project during an interview last week. Another motivator to get it right, he assured councilors: "This is going to have my name on it for a very long time to come."

If not for his personal tie to the state, Sinex said, "I think the uncertainty that carries with a large project in Vermont would be such that I wouldn't be interested in attempting to do it."

He experienced that uncertainty — albeit on a small scale — when trying to convert the horse barn on his Rutland property into livable space, by adding a fireplace, office, pool table, bar, surround-sound theater and swimming pool.

Sinex inquired at the Rutland town office, where an official told him he didn't need to submit any forms. Rutland City's wastewater division had a different reaction, and a debate ensued that went on until Sinex contacted people at the Vermont Agency of Natural Resources. With the agency's assistance, Sinex recounted, "We were able to work through all these issues that seemed to be misunderstood by the local office."

Sinex, who has diabetes, was making regular visits to the University of Vermont Medical Center for experimental eye treatments when a colleague told him about the mall and mentioned that it was on the market. In the 15 months he'd been making the trip north to the hospital, he had never ventured into downtown Burlington. Sinex went to see the shopping area on a mid-April morning in 2013. Burlington Town Center was closed, but Church Street was bustling, convincing Sinex that the place had potential.

At the end of the year, he and a partner — Bob Lieb of the New Jersey-based Mountain Development Corporation — bought it from General Growth Properties for $25 million — $10 million less than the asking price. He and Lieb have since parted ways.

According to Sinex, Lieb wanted to preserve the mall but improve its management, while Sinex wanted to transform it into something very different. "He and I disagreed on that, so I bought him out," Sinex explained matter-of-factly.

So far, Burlington officials have been amenable. When Sinex shared his sweeping conceptual plan — which includes a rooftop park, a convention center and hotel, 250-plus apartments, offices, stores, restaurants, and possibly a cinema — Democratic councilor Karen Paul said, "It just took my breath away."

Sinex proclaimed his vision "perfectly aligned" with that of the city. The mayor, too, said, "I sense a meeting of the minds in terms of what Burlingtonians want and what the current ownership of this property envision."

Both men are referring to the city of Burlington's planBTV, a master-planning document developed with public input and unanimously approved by the city council, which calls for mixed-used development.

Being in sync with the city's goals is important because under the proposal, Burlington would pitch in an undetermined amount of financing to pay for public infrastructure such as the park, pedestrian walkways reconnecting St. Paul and Pine streets, and a stormwater system. The city would use tax increment financing to fund its portion — meaning it would borrow in anticipation of property tax revenue.

Burlington officials aren't big fans of the current shopping center. Various leaders have recently referred to it as a grand obstruction, a chronic underperformer and a poster child for underdevelopment. The problem, according to both Sinex and local leaders: It's a one-story-high building focused solely on shopping that occupies two prime downtown blocks and obstructs several major streets.

Burlington Town Center is a product of the now-discredited urban renewal movement that razed neighborhoods in the name of revitalization. In 1958, voters approved the demolition of several city blocks, though it would take nearly two more decades to build the thing. Before it was a shopping mall, the site hosted Burlington's "Little Italy," a hotel, a furrier, boarding house and the Grand Union Tea Company headquarters.

The mayor acknowledged, "It would be tragically ironic if, in our attempt to address some of the errors of the past, we made major new mistakes," in a memo responding to questions posed by the Progressive councilors.

Similarly, when Republican councilor Kurt Wright asked about the project's potential risks, Peter Owens, director of the Community and Economic Development Office, responded, "That's the key question. It's not how great can this be. It's what can go wrong."

At Weinberger's request, Sinex has agreed to participate in a "public development process" before he completes state and city zoning requirements. A committee of two city councilors and two planning commission members will advise the mayor's administration. The committee will hire consultants to assist them — for which Sinex has agreed to foot the $150,000 bill — and they'll hold at least four meetings at which residents can weigh in. Afterward, they'll negotiate a development agreement with Sinex that outlines both the city's and Sinex's respective responsibilities.

The city council, which will eventually vote yea or nay on the project, signed off on Weinberger's proposed plan last Monday — but not before asking a number of additional questions. The goal is to start the process immediately and have an agreement signed in May.

It's not unusual for the city to enter into development agreements on large projects. What's new, according to Weinberger, is making those discussions public.

Weinberger lauds Sinex as an "energizing" person, "a great listener" and a person who "follows through on commitments." That's a reference to Sinex successfully closing on the mall deal after several prior plans with developers fell through — and landing an L.L.Bean store, which opened on Cherry Street, adjacent to the mall, last month.

Sinex points out that his track record in Burlington also includes convincing the city to do away with two-hour free parking at the mall's parking lot — a decision that met with some resistance.

But he demurred when asked where he expected conflict on his new project. After "six to seven to eight to nine months worth of public vetting and public inquiry and public openness and public this and public that," Sinex said, "I recognize we may be nowhere."

There was laughter in the crowd during the press conference announcing the project, when council president Joan Shannon said, "I don't think there will be many people chaining themselves to the mall building and claiming its historic virtues, but you never know."

Why bend over backward for public buy-in? One possible reason: City officials have suggested that the project will require exceptions to zoning rules, which, Wright predicted, "will be interesting debates to say the least."

As for financing, Sinex isn't too concerned about lining it up. "Some of my partners are extremely well-heeled, if you will," Sinex said. According to a document provided to the city council, one investor is already interested in providing $100 million. "I think raising the money will be the easier of the two tasks," Sinex said — the other being securing approval.

"Obviously when the rubber hits the road, there will be some tough negotiations about how far he's willing to go in order to provide the public benefits that at least I will be expecting from this project," Knodell said.

Sinex and city officials anticipate long-term economic benefits, including up to 1,600 new jobs. But Knodell, an economics professor at the University of Vermont, predicted that most of them will be "very low-wage" and said she's looking for assurance that "people working in those jobs have the opportunity to live there."

Steve Goodkind, the Progressives' candidate for mayor, said he's skeptical about "megaprojects" but agreed that the mall should be redeveloped. Like Knodell, he said he'll be watching "to see if this is good for all groups of people." Burlington's zoning rules require that 15 to 25 percent of the units in new developments be made "affordable" — that is, housing that doesn't cost more than 30 percent what a household earning 80 percent or less than the median income brings in.

Knodell's concern is that Sinex creates mostly high-end apartments and upscale shops because they generate more profit, and "our downtown becomes an enclave for the affluent." "What do we do," she asked Sinex, "when [our goals] aren't necessarily aligned?"

"I don't know the magic formula, but I am committed to the process and notion of affordable housing," Sinex responded. But, he added, "It has to pencil out."

The original print version of this article was headlined "A Plan for the People? Burlington Progs Put Mall Man Through the Paces"