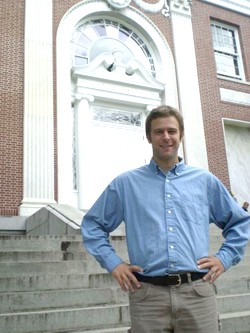 A leading Burlington Progressive says he is running for the Vermont Senate in the Democratic primary partly out of frustration with what he considers the sectarian attitudes of the two parties’ top officials.

Burlington City Councilor Tim Ashe’s unprecedented Dem-Prog “fusion” campaign can be read several ways: as a stinging setback for the Progressive cause of building a viable statewide third party; as a wily maneuver to advance the interests of the Vermont left; or, given the formidable electoral odds Ashe faces in becoming the first Progressive elected to the Senate, as no more than a political curio.

Ashe’s decision to dilute his partisan identity coincides with the recent decision by gubernatorial candidate and longtime Progressive Anthony Pollina to run as an Independent against incumbent Republican Jim Douglas and Democrat Gaye Symington. Ashe said he supports Pollina’s bid, but had urged him to run in the Democratic primary.

That advice was rejected, Ashe said, and, coupled with the Democratic Party’s insistence on running Symington, liberal Vermonters are now left with a “situation so catastrophic” — the high likelihood of another Douglas victory — that “something has to change.”

Ashe, 31, has served on the Burlington council for four years, acquiring a reputation as an antipoverty activist. A project manager for Cathedral Square, the Burlington-based nonprofit developer of affordable housing, Ashe has placed a particular emphasis on housing issues. He also touts his role in helping hold the city’s tax rates steady for three consecutive years.

Making his political positioning especially dexterous, Ashe is also seeking the Progressive nomination for a Senate seat as a write-in candidate. But because running as a Prog would perpetuate the partisan divide he’s trying to bridge, Ashe said he would decline the party’s endorsement and sit out the November general election if he does not gain Democratic backing in the September 9 primary.

“The third-party box isn’t something I’ve ever been comfortable with,” he said. Unlike many fellow Progs, he added, “I’m not obsessed with the concept of a third party per se.”

At the same time, Ashe says Vermont voters should have “additional and superior choices on the ballot” besides those offered by the two traditional parties. He’s critical of the Democratic Party, accusing it on a national level of abandoning the fight for a livable wage. In Vermont, he said, the party hasn’t been nearly forceful enough in challenging Douglas on energy issues.

Ashe pointed out that instant-runoff voting, which Burlington has adopted for city elections, would enable third-party candidates to run for office without fear of indirectly helping an ideological opponent. But the state legislature was unable to enact an IRV law over Douglas’ veto last year, leaving Ashe without that more straightforward path to the statehouse.

Ashe says he is not trying to disguise his Progressive affiliation by seeking the Democratic nomination, but rather emphasizing the shared interests of the Vermont left in his campaign. “Absent IRV,” the only pragmatic way to run, he said, is to “bring together the best elements that both parties offer and to create another option. I’m approaching this with total honesty.”

Ashe’s “fusion” campaign is the first of its kind in the 25-year history of the Vermont Progressive movement. John Franco, one of the party’s founders, ran for a state Senate seat in Chittenden County in 1992 as an Independent, but finished 12th out of 13 candidates for six seats. Several Progressives have subsequently run in state House races with the endorsement of the Democrats, but have not campaigned in the Democratic primary.

Ashe’s campaign comes at a time when the Progressives are striving to build on gains made outside their Burlington base, where they hold the mayor’s office, as well as four of 14 City Council seats and two seats in the Vermont House. Overall in the House, Progressives hold six of 150 seats and are running candidates in seven other districts this year as well. A Progressive has never served in the 30-member state Senate.

Ashe has broken some Progs’ hearts by flirting with the Dems, although others consider him a particularly promising prospect.

Progressive Party Chair Martha Abbott offered a nonsectarian perspective in discussing Progressive-Democratic relations, suggesting it’s the media that depict the two parties as waging “a holy war.” The party’s ultimate goal is to supplant the Republicans as Vermont’s second party, she said. To do that, she and other Progressives are trying “to reach people with a message of what changes are needed, and to do it with a fair amount of political integrity,” she said.

Abbott, who expresses unequivocal support for Ashe’s strategy, said he “has the ability to cut through political rhetoric, and he gets where people are at. If you keep doing the same thing and it doesn’t work, you’re in a rut. You need to figure out a different way to get your message out.”

St. Michael’s College political scientist Bill Grover, a Progressive activist, said that because the two mainstream parties set the rules for the electoral system, it’s “tempting to try to get elected any way you can.” Ashe’s campaign should be encouraged, Grover added, in that “anything we can do to break the grip of the two-party system is a good thing. It’s a plus for democracy.”

But some Democrats question Ashe’s motivations for entering their party’s primary. Vermont Democratic Party Executive Director Kristina Althoff said she was surprised that Ashe filed in the primary “because he is a well-known Progressive.” Some Democrats will see his candidacy as “opportunistic,” Althoff said, although she welcomes it.

“The Democratic Party is a very big tent,” she said. “There are people on the far left and some who are very moderate, so Tim’s is a voice to be heard from one wing of the party.”

On the other hand, Democratic State Senator Jim Condos of Chittenden County said he is troubled by “what looks to be a Progressive move to hijack the Democratic Party.”

Condos said he respects Ashe and many of the other Progressives with whom he has worked. He considers it “ironic,” however, that Ashe has joined erstwhile Progs such as Pollina and former Burlington Mayor Peter Clavelle, who rebranded themselves in an attempt to achieve higher office. He said he wonders why some Progressives find it undesirable to run with their party’s label.

Condos, who is not seeking re-election, has endorsed two-term State Rep. Denise Barnard of Richmond to take over his Senate seat. It’s the only opening in the six-member Chittenden County delegation, which is elected as a bloc; the top six finishers in November will be awarded seats regardless of their party affiliation.

The race includes four incumbent Democrats — Ed Flanagan, Ginny Lyons, Hinda Miller and Doug Racine — and Diane Snelling, the lone Republican state senator from the Burlington area. The incumbents are likely to be re-elected, so Ashe will, in essence, compete with four other candidates for two Democratic nominations. Also running are Sean Starfighter, who finished last in an eight-candidate Democratic field two years ago; and Tim Palmer and Dennis McMahon, who ran a neck-and-neck race for the sixth and final position in 2006 (won by McMahon after a recount).

Ashe regards Barnard, who describes herself as a “business-friendly Democrat,” as his main rival. So far, he has raised $8000 of the $10,000 he plans to spend on the race — a competitive sum, by most reckonings. And the endorsement he’s received from U.S. Sen. Bernie Sanders probably won’t hurt him, either.

Above all, though, Ashe believes voters will understand that his campaign is more practical than radical.

“If I could spend five minutes with every voter in Chittenden County in this primary and make my frustrations clear with what’s happening in the governor’s race,” he said, “I am so confident many people would agree with my strategy.”

Watch the Democratic Primary candidates for Vermont Senate introduce themselves on Channel 17, Sat. & Sun., Aug. 30 & 31, or on the web at www.cctv.org.

VIDEO: See the Democratic Primary Candidates for Vermont Senate on the CCTV website