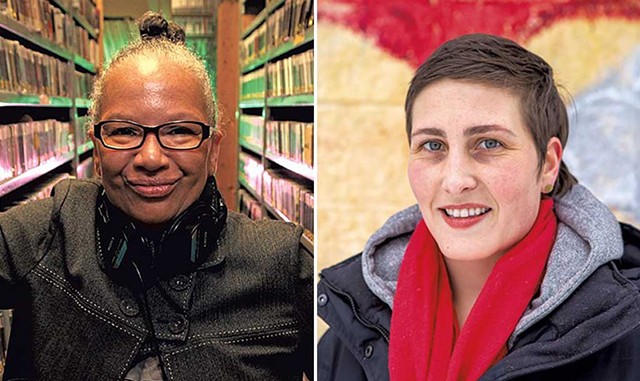 Burlington City Councilor Perri Freeman (P-Central District) will not run for a third term in March, but a well-known candidate — Melo Grant — has announced a bid for the seat.

Freeman, whose election in 2019 ushered in a new wave of Progressive politics in the Queen City, confirmed the decision in a text message to Seven Days on Monday.

"I want to give other people in the neighborhood the opportunity to step into this leadership role," Freeman wrote. "I look forward to participating in City projects as a community member."

Grant, a Burlington police commissioner, will run as a Progressive in her bid to take Freeman's seat. The longtime DJ and 23-year resident of Burlington's Old North End told Seven Days that on the council, she wants to address issues such as housing and public safety.

"It is something I feel I need to do in order to continue to support my community and fight for what's important for my community," she said.

Grant is the first candidate to announce in the Central District, which comprises Burlington Wards 2 and 3. All four "district" seats are up for reelection in March, as is Ward 8, which has been vacant since Progressive Ali House resigned in October.

Related Burlington Progressives Are Down Two Members on the City Council

Burlington Progressives Are Down Two Members on the City Council
By Courtney Lamdin
Politics
Josh Wronski, executive director of the Vermont Progressive Party, said he was excited to hear about Grant's candidacy, calling her "a really strong force in Burlington politics." He thanked Freeman, who uses they/them/their pronouns, for fighting for economic justice and police reform while on the council.

"We're definitely gonna miss them on the city council," Wronski said."But I understand that they've served their two terms and were ready to move on."

Freeman's election was a watershed moment for Burlington Progs. A political newcomer in 2019, Freeman defeated party stalwart and council president Jane Knodell at the Progressive caucus, and then handily unseated her in the March election.

Since then, Freeman has proposed some of the caucus' leftmost-leaning policies, including one to tax Burlington's wealthiest residents. Freeman was also one of nine councilors who voted in June 2020 to reduce the police force through attrition, and steadily opposed subsequent efforts to restaff the department. The councilor also pushed for increased police oversight and once joined a group of protesters who marched to Mayor Miro Weinberger's home and demanded accountability for violent police actions.

A Former Prog Party Chair Challenges Freeman for Burlington City Council
By Courtney Lamdin
Politics
Grant is also focused on public safety. She began her civic service as a member of the city's Special Committee to Review Policing Practices, which was formed in 2019 after allegations of police brutality against young Black men came to light. She was appointed to the police commission the following year and has consistently pushed the department to address racial disparities in traffic stops and arrests — an issue she said she'd stick with if elected to council.

"I'm not doing this because I feel the police commission isn't effective or can't be effective," Grant said. "For me, this is the next logical step."

Grant, 58, has lived in Burlington for four decades, starting as a University of Vermont student in the 1980s. She works for a company that administers health benefits but is better known as the host of "Cultural Bunker," a long-running hip-hop show on WRUV 90.1 FM.

As a councilor, Grant said she would look for ways to increase affordable housing in Burlington, particularly for young families. She's concerned that new developments tend to include studios and one- or two-bedroom units instead of larger layouts for families with more than one child. Those issues "are not being talked about when we're looking at what gets built," Grant said.

She also wants the city to press UVM to build more student housing. Grant is concerned that the college's increasing enrollment — and lack of on-campus housing — is contributing to the city's housing crisis.

"UVM wouldn't talk to little ol' me from the North End, but maybe they'll talk to a city councilor," Grant said. "Do they understand the effects on the city?"

Two Democrats Vying for Burlington South End Council Seat
By Courtney Lamdin
News
Progressives are tentatively planning a nominating caucus on January 8. Wronski, the party director, said the Progs have heard from candidates interested in each of the five open seats — as have the Dems, according to Burlington Democratic Party chair Adam Roof.

The Dems will caucus on December 15 and already have a contest under way: Newcomer Jason Van Driesche is challenging 20-year incumbent Councilor Joan Shannon in the South District.

In the North District, incumbent Councilor Mark Barlow is running again as an independent. The East District seat, which was vacated in September by Prog councilor Jack Hanson, will be filled by special election on Tuesday. The winner will hold the seat until March, when the seat will be up for election again.