Last week, the city announced that spots would be gratis for up to four hours in its parking garages at 41 Cherry and 60 College streets — from now until Christmas. In addition, people who use the Parkmobile app at street meters would get two free hours during the holiday season. These perks are intended to attract shoppers and appease downtown merchants and city councilors who are concerned about the loss of approximately 530 parking spaces because of the stalled CityPlace Burlington redevelopment.

Much of the Burlington Town Center mall and its companion 500-space private parking garage was demolished earlier this year, but the foundation still hasn't been poured for the 14-story, $222 million office, retail and residential edifice that will replace them. Last Friday, a crane sat motionless as pedestrians walked by the empty lot that some have dubbed the "hole" or the "sandbox." At least 31 prime downtown street parking spaces remain blocked because of the idle construction area.

In the last 12 months, CityPlace developer Don Sinex and his partners at Brookfield Asset Management have paid the city $158,000 to replace the revenue those spots would have generated. The $72,000 check for the holiday parking deal is an additional payment.

The promotion is good news, said Conrad Osborne, assistant manager at Kiss the Cook on Church Street. But was it responsible for the throngs of people on the Church Street Marketplace — and in his store — on that bitter-cold day? Just a handful of shoppers who came in seemed to be aware of the special deal, Osborne said.

"It is a good draw for the area, especially considering that parking is such an issue," Osborne reasoned. "With the mall garage closing downtown, it's been a lot tighter. I've definitely noticed a big difference. I've seen a lot of people just waiting and waiting for meters to free up."

Burlington City Councilor Dave Hartnett (D-North District) also heralded the rollout. He has been sharply critical of Sinex and the delays with the mall redevelopment.

"It's a nice perk," Hartnett said. "But it's not like we haven't been inconvenienced here in the last six months." Hartnett said he hoped the commitment from Sinex was the start of a new and better relationship with the city: "It's the least he could do." 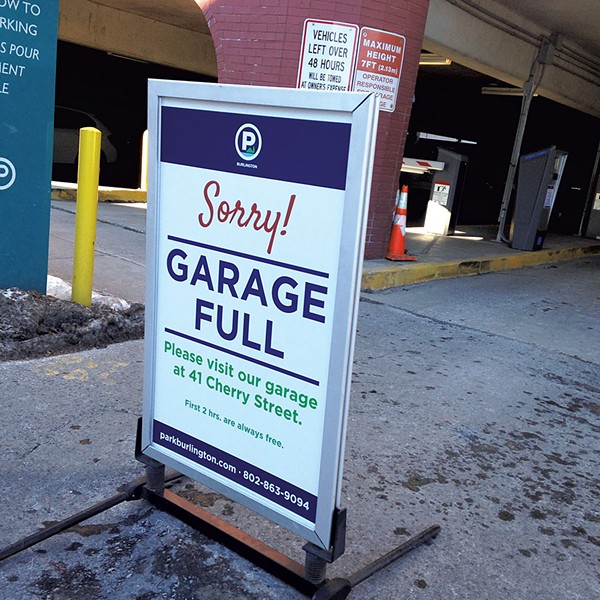 Hartnett had previously suggested that the demolition site be used for parking but conceded last week that he spoke "mostly out of frustration" and didn't mean to suggest the idea was realistic.

It's not, according to Burlington Public Works Director Chapin Spencer. "Safety is paramount. If there's freeze-thaw conditions, who's maintaining the safety of the site for vehicles and pedestrians?" he asked, adding that if cars were to get stuck, "Who's pulling them out?"

Sinex did not return a call seeking comment, but a November 14 article in VTDigger.org referenced an email in which he acknowledged it might be spring before CityPlace gets a foundation.

Burlington's mayor said he and his administration negotiated the seasonal parking deal with Sinex. "We appreciate this, but it's not all we're looking for, certainly," Miro Weinberger told Seven Days on Monday.

Asked when CityPlace construction will begin and whether the development will be modified in any way, Weinberger declined to be specific. "Stay tuned," he said, indicating that an update might come soon. "We think it's really important that Brookfield and Sinex articulate to the public themselves what their intentions are from here, and we are pushing them to clarify that as soon as possible."

Some say Burlington's parking problem isn't about a shortage of spaces, but a perceived shortage. Even with the loss of the mall garage, the public and private spaces downtown total roughly 7,500, and they are rarely all occupied, according to Spencer.

The Marketplace Garage near the corner of Bank and South Winooski is the most heavily used and centrally located of the city's three publicly owned garages. Last Friday, it was not offering the four-hour deal. As cars pulled up around noon, a sign blocked the entrance, informing motorists that the garage was full. They drove on, looking unhappy. "They don't like it," observed Bruce Root, a parking attendant.

Just a few blocks away, there were plenty of spots in the Lakeview Garage at 45 Cherry Street and in the College Street Garage at 60 College, both of which were offering four hours of free parking. But no signs at either facility advertised the deal.

Tyler Armstrong of Grand Isle had headed downtown with his 13-month-old daughter, Leila, to see the decorations and do a little shopping. He parked at the Lakeview Garage assuming the typical deal was in place — two hours of free parking. He was pleased to learn about the four-hour perk from a reporter.

In general, he finds the downtown parking situation challenging and said additional free hours are a good thing. "There are not very many spaces — on the street, anyway," he said. "It's difficult, especially with the construction going on."

The holiday discount does not extend to those who still feed the meters with old-fashioned coins.

"We need to make some changes because parking has and continues to be a major impediment to retail traffic and restaurant traffic in Burlington," said Marc Sherman, co-owner of Outdoor Gear Exchange on Church Street.

And while he doesn't view the demolished mall as a loss, Sherman said the big hole in Burlington's center city is unsightly and creates an inconvenience. "The longer the project drags on, the worse it is for downtown," he said.

Burlington's parking situation got more complicated in 2014. That year, the city increased metered rates to $1.50 an hour in the downtown core and expanded enforcement hours to run from 8 a.m. to 10 p.m. as part of a revamped parking plan designed to bring in more revenue for infrastructure improvements.

It was a necessary step that Spencer conceded has not been overly popular.

"Meters are not something that are warm and fuzzy and everybody likes," he said.

But the money from them has enabled the city to make important repairs to garages over the past four years and to cut $9 million in deferred maintenance needs by half, Spencer said. The city also takes in hefty revenue from parking tickets: nearly $1.4 million annually.

Last year, it trimmed parking enforcement hours in the downtown core by two hours; the meters now require feeding from 9 a.m. to 9 p.m.

And there's more good news related to the Parkmobile app, which allows users to feed the city's smart meters from their phones. Earlier this year, the city negotiated with the company to phase out the fee to extend parking time and to cut the per-transaction fee from 35 cents to 30 cents. One-third of the transaction fee goes to the city to support credit card processing fees; the rest goes to Parkmobile.

Meanwhile, a new Target store at the University of Mall in South Burlington is attracting customers to the big suburban shopping center surrounded by free parking. Downtown Burlington boosters say they are more determined than ever to compete with the burbs for holiday shoppers.

"We're planning on not getting a lot of sleep," said Ron Redmond, executive director of the Church Street Marketplace. "When it comes to competition, it's game on."