Burlington Policing Report Renews Debate Over Size of the Force

Progressives on the Burlington City Council say they are open to hiring more police officers after a recent assessment of the department recommended a larger force. Their support for bolstering the ranks, however, may depend on Democratic Mayor Miro Weinberger's willingness to accept other reforms detailed in the wide-ranging report.

The city released the long-awaited assessment from CNA, a Virginia-based nonprofit, late last week. Among the report's 149 findings was the headline-grabbing conclusion that Burlington needs an "authorized headcount" of 77 to 80 sworn officers to achieve an active force of between 72 to 75 cops. Counting the officers assigned to the Burlington International Airport, the roster size could be as high as 88 — 14 officers above the current cap of 74.

A 9-3 council majority set that cap in summer 2020 during the groundswell of activism sparked by George Floyd's killing by Minneapolis police. Incidents of alleged use of excessive force by Burlington officers, particularly against young Black men, fueled calls for local reform.

Progressives helped turn those calls into reality. With six members on the 12-person body, they can set city policy by attracting a single vote from the council's two independents or four Democrats.

The caucus has often voted as a bloc, and its leader, City Council President Max Tracy (Ward 2), wouldn't say whether he would now support a higher roster cap for the Burlington Police Department. He did say he wants to see "continued progress around issues like community oversight."

Four other council Progressives, including Jane Stromberg (Ward 8), expressed at least some openness to debating the issue.

"I want to let this report inform my decision, and if it's the difference of a few police officers, sure, that's fine. But it must come along with everything else that [CNA is] saying," Stromberg said. "We can't just cherry-pick this report and make it so we're back to square one."

The police staffing level has dominated Burlington political discussions since that June 2020 vote to reduce the force. Both Weinberger, who criticized the council-imposed cap, and councilors who supported it had pointed to the future CNA report as a key document in determining an appropriate roster size.

While the reduction in officers was to be achieved through natural attrition, the department instead experienced an exodus. From 90 officers in June 2020, the head count has dropped to 68. Members of the Burlington Police Officers' Association have publicly blamed council Progressives for low morale and the spate of departures.

Weinberger and acting Police Chief Jon Murad proposed filling gaps in coverage with unarmed civilians who could handle nonemergency calls — hires that are now in progress — but they've also advocated for more police. In February, when councilors rejected Weinberger's plea to boost the roster to 84 officers, the mayor warned that the council was welcoming a "crisis." 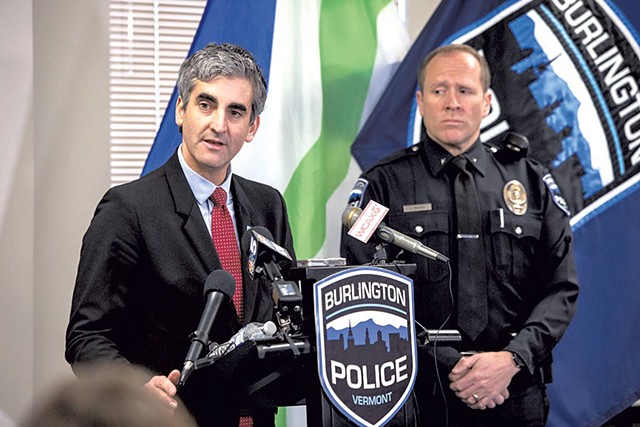 In August, the Burlington Police Commission advised a temporary 82-officer cap — until the CNA report came out — after gunfire incidents downtown rattled community members and business leaders. But when the city council took up the measure, it failed on a tie vote, with some Progs and Councilor Ali Dieng (I-Ward 7) saying they wanted to see CNA's staffing recommendations before considering an increase.

They won't have to wait long: City Councilor Joan Shannon (D-South District) will introduce a resolution at a meeting on October 18 to set the cap at 88 officers. She was pleased to hear that Progressives may be coming around.

"The current staffing is completely inadequate," Shannon said. "I don't know why we would delay at this point."

The council has taken some action to try to shore up the shrinking force. Members voted unanimously last week to spend $850,000 on officer bonuses and recruitment incentives for new cops.

Seven Days spoke to five of the six council Progs about the report's recommendations. Most said they're amenable to raising the cap but want assurances that Weinberger will go further than simply rebuilding the ranks. Councilor Perri Freeman (P-Central District) did not respond to a request for comment. Councilor Dieng, an independent who voted in June 2020 against setting the 74-officer cap, said he'd been out of the country and had not yet read the full report.

Councilor Jack Hanson (P-East District) said he doesn't want the cap to become a distraction from the broader reform discussion. Hanson said Weinberger and Murad have been "hyper-focused" on staffing numbers, using press releases and the mayoral election to criticize the council's decision to reduce the force.

He wants the administration to show the same urgency in advocating for other CNA-endorsed reforms, such as hiring more unarmed mental health and social work professionals, and reducing racial disparities in traffic stops and the use of force.

"We see the mayor and the chief really putting a lot of energy and capital ... around the need for a higher cap and how that is what is going to keep people safe," Hanson said. "I want to hear them joining us and talking about these other elements that are needed to actually create a safe and healthy community."

Indeed, Weinberger has trumpeted CNA's report as validation of his approach to policing. Shortly after the report was released, his office sent out a press release touting the ways it aligned with his policy ideas. In a subsequent interview with Seven Days, Weinberger said the council needs to "rightsize the authorized cap" soon.

"I'm aware I've taken flak, but I think the department is in a precarious situation," he said, adding that increasing the number of officers will improve morale by creating more opportunities for career advancement.

"That's part of why we've been losing people, so I think it's really important that we now say ... This is the vision that we want to work toward," he said. "It's going to take us a while to get there, but that's the department we should be."

Councilor Joe Magee (P-Ward 3) said his vote on staffing hinges on the mayor's willingness to increase community oversight of police — something that CNA's report said is lacking in Burlington. The document recommends that the city's civilian-led police commission "be given greater than an advisory role" and that the department should consider forming a citizen review board instead of "having the chief serve as the final authority on facts and discipline."

Weinberger previously vetoed a Progressive effort to form a "community control board" that could investigate police misconduct and mete out discipline. The mayor said he favored giving more authority to the police commission instead. Months later, the council's Public Safety Committee is working on a resolution to do just that.

Magee still supports the control board idea but said he'd settle for the police commission proposal in the short term. If Weinberger were still on board, Magee said he'd agree to raise the cap on the number of officers.

"I'm looking forward to having the conversation and hope that we can look at this system more holistically, rather than getting caught on this singular number of sworn officers," he said.

Councilor Stromberg said she'd support adding to the police ranks if the city implements CNA's other recommendations, such as those that address the response to mental health calls. The report found that department policy doesn't provide officers with guidance for how to manage people in crisis who resist police commands; it recommends more intensive training on handling those situations.

Nearly all the Progs interviewed took umbrage with Weinberger's inference that they had erred in cutting the police force last summer. Councilor Zoraya Hightower (P-Ward 1) conceded that councilors "overshot the reduction" in officers but said the vote prompted an overdue "painful process" of reckoning with racial justice and policing.

"I don't want us to backtrack and think that what we did was a mistake," she said. "It's not a mistake at all. It helped create this conversation, and I think that's really important, too."

Correction, October 7, 2021: An earlier version of this story inaccurately described one of Councilor Ali Dieng's votes on the policing cap.

The original print version of this article was headlined "Tip of the Cap? | Burlington policing report renews debate over size of the force"