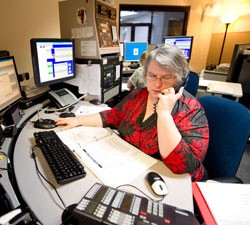 Tune in to police radios in most Vermont towns, and you’ll hear patrol officers and dispatchers broadcasting real-time information about accidents, break-ins and occasionally major crimes.

Tune in to the Burlington Police Department’s primary radio channel — 460.125 megahertz on any police scanner — and you’ll hear nothing but static, interrupted by a droning buzz like a motorboat.

Without fanfare last spring, Burlington police encrypted their main broadcast channel, making it impossible to hear anything being discussed over the most commonly used police radio frequency. Several of Burlington’s lesser-used channels remain unencrypted, as does the city fire department’s channel.

The encryption came in response to what Police Chief Mike Schirling says was a growing problem: criminals, or teams of criminals, using police scanners and text messaging to anticipate and evade police. Someone listening to a scanner at home can track police, Schirling says, and relay their movements via text message to an accomplice breaking into cars or selling drugs on a street corner. The encryption will improve public safety and officer safety, the chief says.

“Scanners are pretty pervasive,” Schirling says. “The difference is that now with contemporary cellphone and messaging technology, not everybody needs to carry a scanner with them. It has a force-multiplying effect for them that is pretty significant.”

Criminals using scanners to outfox police isn’t a new problem. But until recently, the technology required to digitize and encrypt police radios was cost prohibitive, Schirling says. Burlington police encrypted their radios as part of a five-year, $1.5 million upgrade to the department’s communications system funded through grants.

BPD’s radio silence has left radio hobbyists such as Jim Lawrence puzzled — and more than a little peeved. Lawrence lives in Randolph Center and wrote to Seven Days to express concern about the encryption.

He says the blackout raises several important questions: Why wasn’t the public informed about the switch and allowed a comment period? With Burlington police encrypted, how are neighboring departments such as Winooski and South Burlington to be informed of a major incident affecting multiple communities? Why remove virtually all police chatter from the public channels? Why not just reserve the encrypted channel for the most sensitive information?

“Prior to encryption, the police had literally hundreds of extra eyes and ears who monitored their communications and could assist them if they saw someone the police were looking for and provide tips,” writes Lawrence, who stresses he is not “anticop.”

Chief Schirling explains that police around Vermont have a common channel — referred to as Channel 2 — that’s used by all local departments and the state police for sharing information. If something big went down that affected multiple towns, that’s the channel emergency first responders would use.

Police radio encryption is a hot topic on websites such as ScanNewEngland.net, where scanner junkies debate whether barring the public from monitoring police chatter is a breach of government transparency.

“Now I don’t know how we’re going to communicate that,” Sadar says. “Does someone have to write a press release? Does someone Tweet it? Adding another layer of communication where public safety is at risk, I don’t think helps a lot.”

Burlington is the first of many Chittenden County police departments headed toward radio encryption, Schirling says. South Burlington, Essex and the University of Vermont are also transitioning to encrypted broadcasts, he notes.

For scanner hobbyists like Lawrence, that can only mean more static.