Burlington Police Are Increasingly Demoralized — and Planning to Leave Their Jobs 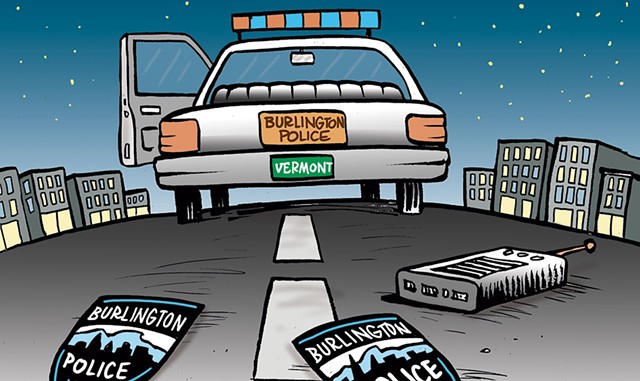 "Sobering." That's how two Burlington police commissioners described results of a survey by the police union that tallied a long list of complaints — and a desire by more than half of the cops who responded to find work somewhere else.

The survey should ring alarm bells for both sides of the police debate: Supporters of deep cuts may see more departures than they bargained for; those who want positions restored may find the ranks already deeply thinned.

At a police commission meeting last week, Officer Joseph Corrow, vice president of the Burlington Police Officers' Association, shared results of the survey, in which 28 of the 50 officers who answered said they were looking for jobs elsewhere.

"We were the pinnacle of law enforcement in the state. People wanted to come here. People don't feel that way anymore," Corrow told commissioners. One officer he quoted said the department is the "laughingstock" of its peers.

"The job used to be fun and occasionally satisfying and rewarding but now it's constantly miserable." Anonymous Burlington police officer tweet this

The survey questions were open-ended and asked, in essence: Why are you still working at the Burlington Police Department? What do you want to see changed? What is the major reason you're staying? What would keep you from leaving if you're looking elsewhere?

The anonymous answers were brutal:

"The job used to be fun and occasionally satisfying and rewarding but now it's constantly miserable," was one response that Corrow read to the commission. "Most of that misery is being generated by the city administration/council ... the most dishonest group of people I've encountered in my entire profession. I've given the best years of my life in this job getting kicked, punched and spit on only to be rewarded with a group of people spreading lies and hatred about me and my coworkers to further their misguided ideologies."

Another said: "Last summer my daughter was terrorized at Burlington Parks and Rec summer camp by other children when she mentioned I'm a police officer. They threatened to light our car on fire and kill me and my wife. My daughter has had difficulties processing this and still will not talk to me about it."

A third worried that "the smartest and most talented and experienced are leaving due to bad conditions ... a talent and brain drain that needs to be remedied immediately. It will take decades to make up for this."

Corrow told commissioners he didn't intend to spread "doom and gloom" but to present reality.

"I'm not here to say that you're doing a terrible job. I'm not here to blame you. I'm not here to do any of that. I'm just here to make you aware of what the officers that work at the department are currently thinking," he said. "It's almost every day I hear somebody I didn't know is looking for employment somewhere else."

The city council last year agreed to reduce the force by 30 percent through attrition, from a maximum of 105 officers to 74, in response to racial justice protests and after allegations that some officers — including Corrow — had used excessive force. The department is down to 75 officers, according to Deputy Chief of Administration Matthew Sullivan, who said 31 officers were looking elsewhere, three more than Corrow's survey. The best-case scenario, Sullivan told commissioners, is that only 10 officers would leave in the next year; the worst-case scenario would be 20. That would put the midnight shift in jeopardy, Sullivan said.

That's "where we're at and where we're possibly going. It's definitely something that I've struggled with for the past year," Sullivan said. The current level of staffing means the department is paying for an average of 15 hours of overtime work each day, not all of which is voluntary. One officer who worked an extra shift fell asleep driving home, crashed his vehicle and "thankfully ... was not injured," Sullivan said.

A consultant hired by the city will report in September on how the department conducts its policing and what resources it needs to do the job. Corrow told commissioners he is worried that too many officers will leave before then.

"I just want to acknowledge how hard a time this is for the BPOA and the officers, and I really appreciate you sharing that information with us. It's very sobering," said commissioner Stephanie Seguino, a University of Vermont professor who has studied racial profiling and traffic stop data.

"I do think there's a legitimate conversation about certain things that do need to change that are considered to be systemic and issues of racial inequities," Grant said.

Commission chair Jabulani Gamache echoed Seguino. "As a bartender, I think 'sobering' is the proper word for what we just heard," he said.

On Monday, the commissioners met again and voted to recommend that the city council raise the cap on the number of officers by eight positions. It's unclear whether the council will take up the proposal when it next meets, on August 9.

The middle seat on an airplane offers more space and comfort than a crowded legislative committee room at the Vermont Statehouse.

Lobbyists, members of the press and citizens sometimes have to climb over one another to reach one of the few seats; the alternative is to join the ranks of those forced to stand — perhaps for hours — inches behind a seated lawmaker. The odors of perfume, cologne and sweat mingle in the small, stuffy committee rooms. Sen. Joe Benning (R-Caledonia) once guided a woman who fainted into his chair before she hit the floor.

But, for better or worse, thanks to COVID-19, committee rooms where most legislative business is conducted will be less crowded when lawmakers return to the Statehouse in January after more than a year of working remotely.

Lawmakers plan to provide larger spaces for some committees while also limiting the number of people in committee rooms. It's challenging because much of Vermont's 19th-century Statehouse is a warren of small rooms and tight spaces not designed for 21st-century social distancing. The solutions won't be easy. Or cheap. The legislature has set aside $2.5 million to make needed improvements and will likely use every dime.

But the good news — again, thanks to COVID-19 — is that the return-to-the-Statehouse plan actually will make it easier for more Vermonters to observe the legislature. During the pandemic, lawmakers met via Zoom, and the public could tune in remotely to watch live or to view archived recordings. Lawmakers plan to continue these practices.

A legislative summer-study committee will present recommendations on August 15 for how all 180 lawmakers can safely return. While many questions remain unanswered, several things seem clear: The Statehouse will be open to the public, and the current plan is to require neither masks nor proof of vaccination to enter.

"Do we want a vaccination police person at the door to say, 'Are you vaccinated or not?' and if you're not, then saying you can't come in?" asked Rep. Alice Emmons (D-Springfield), chair of the House Committee on Corrections and Institutions and head of the study committee. "Well, we're not going to do that ... People need access to their government. The question is, how can we provide that access in a safe manner?"

Benning, who also sits on the study committee, seconded Emmons. "I know there's a lot of people who are just chomping at the bit to see mandated masking or mandated vaccine passports," he said. "I'd be uncomfortable doing that."

Most visitors are aware of the Statehouse's crowded spaces and will protect themselves, he said. "Will there be an idiot or two? Sure. But we can't legislate for idiots."

Benning said lawmakers are racing to buy broadcast equipment for the 25 committee rooms, and he hopes that providing continued internet access will reduce the number of people who come to Montpelier.

In some cases, lawmakers' expectations have been unrealistic.

For example, the legislature's information technology director, Kevin Moore, recently warned lawmakers that his staff of eight technicians would need more help to manage a hybrid system in which lawmakers are working in the building and meetings are also broadcast. During the pandemic, he said IT staff were overwhelmed by demands, such as late-night calls from lawmakers who expected solutions by morning.

Technicians had to assist multiple committees simultaneously, which he said would only be more complicated with lawmakers spread throughout the building.

"The pressure on IT staff was absolutely immense during the pandemic. It was constant, at times overwhelming and exhausting," Moore said. Outside help may be needed, he added, because information technology and providing audio visual services are different skills.

"It's complicated," Emmons said of the evolving return plans. "It's like an onion. You start peeling off one layer, and it raises another layer and then another layer."

Her study committee will recommend limiting occupancy in the 14 House and 11 Senate committee rooms to "actual seating capacity," a likely max of 20 or so, she said.

That cap leaves little room for observers after House members or senators are seated, along with their staff of clerks, witnesses, legislative lawyers and fiscal analysts. Emmons' utopia would have an alternate site at the Statehouse from which an overflow audience could watch. Or, Benning said, some hot-button hearings could be moved to larger, alternative sites close to the Statehouse.

The study committee ruffled some feathers when it explored whether House Republicans could caucus in the Senate chamber if they need more space.

The House and Senate are "two different countries sharing the same building," John Bloomer Jr., a former senator and now defender of Senate rules and decorum as its staff secretary, told Emmons' committee. "With all due respect, whether we want representatives sitting at [a] senator's desk, I'm not sure," Bloomer said. What if a House member saw confidential Senate information? "It may seem like a protectiveness, whatever, but the whole idea is you're going into someone else's country."

Not to mention, he said, there have been "nasty issues like spilled hot chocolate and tipped desks" when outsiders have used the Senate in the past.

"John, these are extraordinary times, and I think we're all trying to think outside the box a little bit about space use," she said.

Lawmakers were already planning a major Statehouse expansion before the pandemic, which Benning said is even more urgent.

But Bloomer is not the only one whose sense of how the Statehouse should work may be disrupted. Benning conceded any return plan is likely to irritate many denizens — lawmakers, lobbyists, the press and the public. "We're going to be making decisions, ... [and] 100 percent of the people in the building will be pissed off about something," he told Fair Game.

The original print version of this article was headlined "Cops Out?"