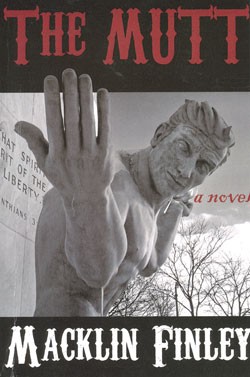 The Mutt was published in March by The Minimal Press, an independent Burlington outfit run by poet and Seven Days art critic Marc Awodey. In 2008, Minimal released NOTES FROM SPACESHIP, a collection of comic vignettes by “Agent Martian” — aka Mark Pekar, a part-time Vermonter who writes librettos for Burlington’s Viva La Voce Puppet Opera. Finley says he and Pekar — who also goes by the name Mickey Western — recently shot a YouTube video of themselves “engaging in bizarre behaviors” on the streets of New York City.

Finley’s first novel concerns a Detroit painter and janitor named Martin Walsh who retells stories narrated to him by his grandfather. Finley says Detroit’s checkered social and industrial past is a perfect backdrop for his multigenerational American narrative. Walsh, he adds, embodies a common struggle to balance creative impulses against economic realities.

The 31-year-old Detroit native speaks from experience. A published poet who studies writing and literature at Burlington College, Finley wrote The Mutt while working as a cook at high-end restaurants in Detroit and Mande-ville, La. He now hosts a bimonthly spoken-word night at The Monkey House in Winooski and is a founding member of the Burlington-based Parima Poets Publishing Collective.

Anna Blackmer, Burlington College’s chair of arts and humanities, read early drafts of The Mutt and says Finley writes in a sophisticated voice without sounding “academic.” His characters are compelling because they are sympathetic but stubborn, Blackmer adds. She also likes how Finley’s Detroit landscape informs his investigation of class issues.

“It’s very American,” says the prof. “But not in a clichéd kind of way.”