Burlington Ignored Its Livable-Wage Ordinance for 12 Years — Now What? 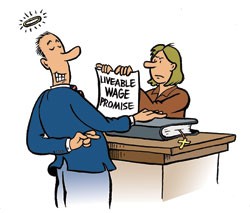 The city of Burlington has won all kinds of accolades — from best sunsets to sexual health — but a report last month revealed Vermont’s biggest burg has failed to enforce its celebrated livable wage ordinance for the past 12 years. On that score, it’s not alone: Only a handful of the 123 municipalities around the country with such wage standards have bothered to monitor compliance, according to a national expert on livable-wage initiatives.

“It’s a common phenomenon that these ordinances get passed and then get ignored,” observes Stephanie Luce, a labor studies professor at the City University of New York who tracks livable-wage-related issues. “Cities typically don’t assign staff to monitor them.” As a result, Luce adds, most of these ordinances are “mainly symbolic” and not enforced.

Exceptions can be found in a few big cities — San Francisco, Los Angeles and Boston, to name three — where labor unions are involved in community oversight bodies that ensure mandated wages are being paid. Some of these monitoring groups are authorized to inspect the payroll records of city-hired contractors, Luce says. In Los Angeles, they send representatives into businesses to inform employees of their livable-wage rights.

Luce says Burlington deserves credit for applying the livable-wage standard to its 600 full-time city employees, noting that some cities impose minimum-pay requirements on contractors but not on themselves. The current ordinance applies to city contractors receiving more than $15,000 in taxpayer funds.

Burlington gets additional props from the prof for at least reviewing its record of enforcing its ordinance, which mandates hourly wages of $13.94 for employees with health insurance and $17.71 for those without.

City Attorney Eileen Blackwood recently issued a critical assessment of the 12-year-old ordinance, which found that only 23 of 160 contractors signed a sworn statement to pay workers a livable wage. Almost every city department had failed to press contractors to obey the directive, and there wasn’t a single case in which the city penalized a contractor for noncompliance, Blackwood’s review indicated.

The report also pointed to the ordinance’s seemingly illogical provision that businesses leasing space at the city-owned airport are subject to livable-wage requirements, while businesses leasing other city-owned spaces, such as the Community Boathouse, aren’t held to the same standard. City Councilor Sharon Bushor (I-Ward 1), who helped write the ordinance in 2001, says she doesn’t know why the livable-wage rule only extends to airport renters.

That provision also appears inherently unenforceable, observes Councilor Chip Mason (D-Ward 5), a lawyer and the current chair of the ordinance committee. The four commercial carriers operating at Burlington International Airport — Delta, JetBlue, United and US Airways — pay some of their workers less than the city’s livable wage, according to airport interim director Gene Richards. And Burlington, which is struggling to attract new airlines, is unlikely to initiate any action that might upset the current carriers.

One Flight Up, the airport’s main restaurant, also failed to meet the livable-wage requirement and never sought a waiver to exempt its workers — unlike Skinny Pancake, which did get an exemption for the three eateries it recently opened at BTV. But One Flight Up’s noncompliance is a moot point now. It went out of business two weeks ago — a victim, says Richards, of competition from the Skinny Pancake. It’s unlikely the airport will find a new restaurant to occupy the defunct one’s space, Richards says, citing the livable-wage requirement as a potentially insurmountable obstacle.

The city council recently directed Mason’s committee to review, and possibly amend, the livable-wage ordinance. And the chairman suggests that changes may well be necessary, at least in regard to the airport provisions.

The administration of Mayor Miro Weinberger must also address the question of enforcement. The city may have to hire someone to monitor compliance or task a current city employee with keeping tabs, Mason comments.

In an emailed response to questions from Seven Days, Weinberger writes that he favors creating a “centralized contracting function” that would, “apparently for the first time,” enable the city attorney’s office to review all municipal contracts before they are executed. Blackwood’s draft budget for her office allocates “resources” for that, Weinberger says — an outlay that could be offset by a projected $40,000 in savings from doing more legal work in-house.

How did Burlington fall short of becoming what Bushor hoped it would be: “a model city” for fair pay?

Blackwood, who was hired as city attorney last July, says she doesn’t know — and didn’t inquire — about the history of enforcement. She did suggest in a recent interview that it would likely have been up to the city’s chief administrative officer to monitor compliance with the ordinance.

Brendan Keleher, who held the equivalent of that post in 2001 under former mayor Peter Clavelle, says he did strive to uphold the livable-wage standard. “Contracts were routinely brought before the Board of Finance for review” of their compliance, Keleher recounts. As city treasurer, he had a seat on that board. Bushor, who served on the board alongside Keleher, confirms that such reviews were carried out.

Ken Schatz, who as assistant city attorney helped write the livable-wage ordinance, adds that enforcement of its provisions was “expected to be complaint-driven.” The city has no capacity to investigate whether a contractor who signed a document is actually paying livable wages. So the onus would have been on individual employees to complain if they were being underpaid, says Schatz, who now works as an attorney for the state’s Agency of Human Services. Of course, that assumes someone working for an outside contractor would know enough about Burlington’s ordinance to realize he or she was being undercompensated.

At some point during the past decade, the board of finance and the chief administrative officer stopped monitoring whether contractors were complying with the ordinance. Nearly all city department heads also overlooked the requirement. And the city council made no effort to ascertain whether its ordinance was being respected.

Ward 2 Progressive Jane Knodell was on the city council in 2001, when she and her colleagues passed the livable-wage ordinance. She says the group was never responsible for compliance. “It’s a policy-making body,” she says of the council she returned to last month, “not an enforcement arm.”

Asked whether his administration will seek to directly monitor the wages city contracts are paying, the mayor is noncommittal, pointing to recommendations in Blackwood’s report but not explicitly endorsing any. The report suggested payroll reporting on a quarterly or annual basis for contractors receiving sizable payments from the city — perhaps $250,000 or more. “This will focus the city’s limited enforcement capabilities to have the largest impact,” Blackwood wrote in the report.

Weinberger also offers a tempered response to a proposal — from City Councilor Rachel Siegel (P-Ward 3) — to pay a livable wage to Burlington’s seasonal and temporary municipal workers; those workers are not currently included under the ordinance. Weinberger says he doesn’t object to a council review of “whether the framers of the livable-wage ordinance got it right” in excluding workers in those categories from coverage. Noting that many are “high school and college students just entering the workforce,” Weinberger adds, “Any expansion of the livable wage ordinance needs to be weighed against the cost to the city at a time when city finances are strained.”