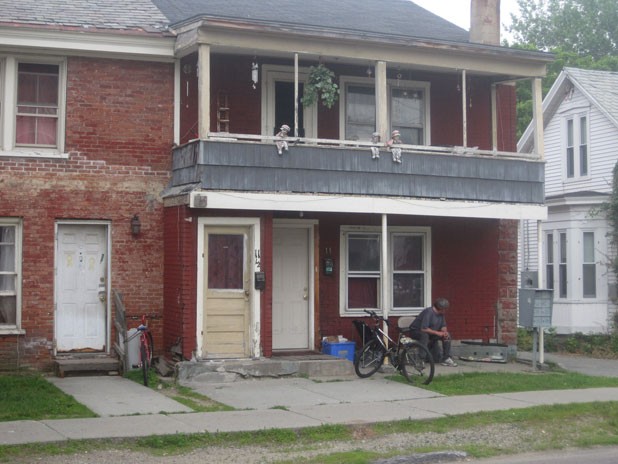 Long-standing housing code violations at properties owned by Burlington’s Bove family are highlighting deficiencies in how the city enforces health and safety standards at rental units.

The code problems have gone unaddressed for so long at three residential buildings owned by Richard Bove Sr. that the city is threatening to yank the liquor license from Bove’s Restaurant on Pearl Street. City hall has warned three other establishments — Radio Bean, ONE Pepper Grill and Lounge, and Kountry Kart Deli — they could face the same treatment as a result of unpaid tax bills.

The city council’s license committee issued the ultimatums last month to Bove — and his son Rick Bove, who manages his father’s properties — at the request of code enforcement director Bill Ward and zoning administrator Ken Lerner. Ward describes many of Bove’s violations as “relatively minor,” such as cars parked on grassy areas at 69 Hungerford Terrace and 69 North Willard Street. But more serious deficiencies — such as loose slate on the roof, an exterior wall in poor condition and lead paint issues — have also gone unaddressed at a nine-unit building Bove owns at 3-11 George Street. In all, about 40 housing code violations have been reported at Bove’s George Street properties, Ward says.

More worrisome, according to Ward, is that some of the violations have gone uncorrected for nine years.

Burlington’s liquor license threats to Bove and other business owners are raising legal questions about the lengths to which the city can go to force compliance with its ordinances. ONE Pepper Grill owner Toby Alan Dion says Bove objected to the ultimatum a recent licensing committee meeting partly on the grounds that there is no connection between eligibility for a liquor license and compliance with the housing code. Numerous attempts to reach the 76-year-old restaurateur for comment were unsuccessful.

Ward acknowledges that holding a liquor license hostage is “a fairly heavy-handed tactic.” But he adds that the Boves’ failure to correct problems at three separate properties amounts to “a pattern that seems to require an overarching way to bring them into compliance. We’re past the point of being patient with this.”

Ward wrote to Rick Bove in April 2011, for example, saying construction debris on the Hungerford Terrace property had not been removed four months after that violation was cited. Ward issued Bove a $50 ticket, which the landlord paid. Bove may also have been ticketed on one or two earlier occasions, but, Ward says, “I don’t go back that far in this position, and I’ve been focusing since 2010 on clearing up current problems.”

In addition to issuing warnings and tickets, the City of Burlington pursued Bove in criminal court several years ago because of his intransigence. Assistant city attorney Gene Bergman recalls that Judge Michael Kupersmith threw out the case on grounds it was based on a misinterpretation of statute.

A year ago, Ward wrote to Bove again, this time warning him about a noisy roof party at 69 Hungerford Terrace that had drawn the attention of Burlington police. “This is a serious safety concern that needs your attention,” Ward told Bove in regard to the revelry on the railing-free roof. Two weeks ago, three young women were sunning themselves on that same perch but quickly retreated through a window when a reporter asked if he could take their picture.

Bove is not alone among Burlington landlords in letting code violations fester, Ward says, but he adds, “the number of properties at issue does make this situation unique.”

City Councilor Norm Blais (D-Ward 6), who chairs the license committee, has asked the city attorney to assess whether the council has legal authority to link liquor licensing to housing code or tax issues. That legal opinion is expected prior to an upcoming committee meeting at which Ward is expected to report on the status of Bove’s compliance.

Committee member Councilor Max Tracy (P-Ward 2) says it’s appropriate to use a liquor license as leverage. “Having a liquor license is viewed as a privilege,” Tracy says. “It’s an opportunity to make significant amounts of profit, so you should be in good standing with the city in every aspect of your dealings with the city.”

Tracy adds that the committee is not trying to prevent a business from making money. “I have nothing but respect for Mr. Bove and his restaurant,” Tracy says. “It’s a legend in this town.”

Known for the Italian restaurant and line of pasta sauces that bear his name, Bove is also a political figure of local historical significance. Some observers have suggested that he is indirectly responsible for Bernie Sanders’ epochal election as mayor of Burlington in 1981.

Bove ran as an independent in that race after failing to defeat incumbent mayor Gordon Paquette in the Democratic caucus. Because he drew votes that would presumably have otherwise gone mostly to Paquette, some credit Bove with facilitating Sanders’ 10-vote victory.

But even as Tracy nods toward the stature of the restaurant owner, the city councilor notes, “I’m getting complaints from constituents about housing problems being ignored.” Tracy’s ward includes both the North Willard and Hungerford Terrace properties.

Questions about those rental units, and the apartments on George Street, were referred to Rick Bove, who did not respond to repeated requests for an interview. But the younger Bove did request a meeting with housing code director Ward soon after Seven Days began leaving messages about the subject of this story.

As of July 5, the Boves’ had corrected all the violations at the Hungerford Terrace property, Ward says, including a broken side porch and installation of barriers to prevent cars from being parked on the grass. Progress has also been made in bringing the North Willard Street building into compliance, Ward says.

Meanwhile, the chief code enforcer says he has reached an agreement with Rick Bove to defer action on the less serious violations in the George Street property until at least July 16, when the city’s Development Review Board is scheduled to consider the Boves’ plans for redevelopment of that site. The Boves want to demolish the structures and replace them with 23 residential units and one commercial space. Known as the George Street Lofts, the new complex would rise above and behind a historic brick building that Bove owns on Pearl Street.

Ward says he’s not waiting for a definitive ruling from the DRB before requiring “immediate upgrades” on the George Street units’ more serious deficiencies. Regarding the less pressing problems, he says, “It doesn’t make sense to push forward on everything in a transitional phase until we see what action the DRB takes on that property.”

Some of those violations have gone unaddressed for many years, Ward acknowledges.

So why hasn’t the city made more persistent attempts to force compliance?

“They probably fell off the radar because they’re minor in comparison to some of the things we deal with on a weekly basis,” Ward replies. He cites potentially life-threatening conditions such as floodwater in basements that could pose the danger of electrocution. “We have to close those units and declare them unfit for human habitation,” Ward says. “That’s the extreme conditions we regularly deal with.”

Ward won’t cast blame on his predecessor, Kathleen Butler, who now works in the Portland, Ore., city revenue bureau. But he does say that enforcement efforts were not handled as efficiently as they could have been in the years preceding his appointment.

In a telephone interview, Butler recalls that the number of housing inspectors increased during her tenure in Burlington and that efforts were made to bring Bove’s units into compliance — such as the legal action brought by the city attorney’s office.

Since Ward’s appointment in 2010, the code enforcement office has managed to double the number of annual inspections it carries out, even though the number of inspectors — five — has not increased during the past three years, he says. The office inspected a total of 1500 units in 2009 and is on track to inspect 3000 this year, he notes. If sustained, that improved performance will enable the city to review the condition of every one of its roughly 9000 rental units prior to the expiration of their three-year certificate of code compliance.

The council’s license committee will also soon learn whether the city has the authority to revoke liquor licenses from establishments for unpaid taxes, as it threatened to do with Radio Bean, ONE Pepper Grill and Kountry Kart Deli. The three businesses are said to be paying their debts and expect to have their liquor licenses renewed.

With his hipster hangout threatened because of an unpaid tax bill of “a few thousand dollars,” Radio Bean owner Lee Anderson says he “just assumed they have the power to act in that way.” Anderson recalls that when he first applied for a liquor license about eight years ago, the committee told him it would not be granted until he either returned or paid for a Ramblin’ Thomas CD he had borrowed from the Fletcher Free Library several years earlier. “If they could do that, I figured they could certainly do it on taxes,” Anderson says.

“The thing with Bove and housing violations, though, that’s kind of weird,” Anderson adds.