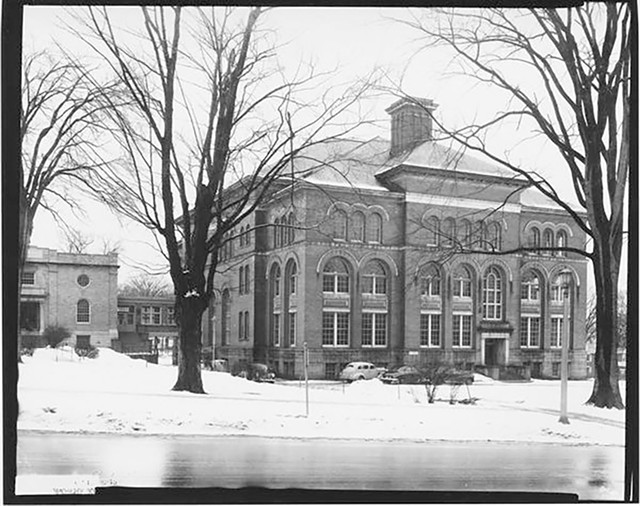 In 1964, high school students in Burlington prepared to leave their downtown digs for a sprawling, cutting-edge campus off North Avenue on the outskirts of town.

A ballooning student body had led to overcrowding and wear and tear on Edmunds High School, a stately Renaissance Revival building that opened in the spring of 1900 on the corner of Main and South Union streets. Its wooden staircase had even developed a dip in the middle from years of stomping feet.

Student staff writers of the 1965 yearbook contrasted "the crowded classrooms and corridors, the insufficient space and equipment of Edmunds" with "the modern laboratories, spacious corridors and classrooms, and up-to-date facilities" of the new campus on Institute Road.

"Yes, we remember fondly our years at Edmunds," they declared, "but — we were the first class to graduate from the new Burlington High School!"

Nearly 60 years later, students have been forced to relocate from their now-outdated New North End home after tests found high levels of airborne, cancer-causing PCBs in several buildings. Their new school is back downtown, but the location is better described as dystopian than cutting-edge. The 150,000-square-foot Cherry Street space is, after all, a former Macy's department store, remodeled in just 10 weeks.

Escalators run up and down the center of the building, the walls are still plastered with Levi's ads, and hot meals are dished out in a cafeteria that once held the latest fashions from Michael Kors. Students will call the building home for three-plus years as the district figures out what to do with the contaminated Institute Road campus.

The Macy's building didn't even exist when Burlington high schoolers last studied downtown. But the recent move evoked a flood of memories for Edmunds alumni, who remembered fondly the days when the city center was an integral part of their high school years — the place for lunchtime hangouts, afterschool jobs and streets to cruise on Saturday nights. Half a dozen alums, the youngest now in their seventies, spoke to Seven Days about their long-ago experiences. 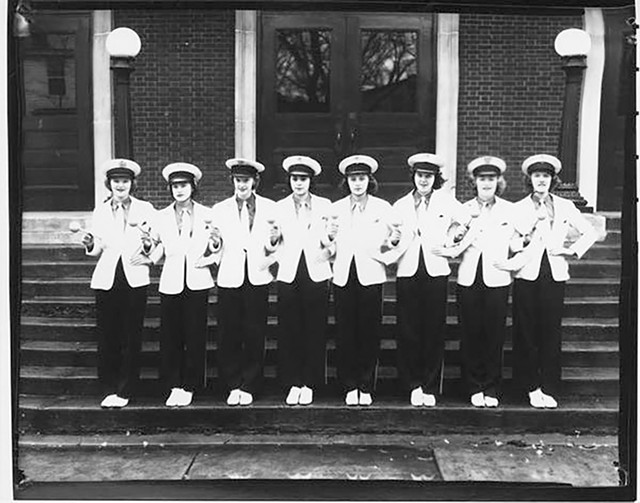 Edmunds' Main Street location allowed more students to walk to school, so socializing began as soon as teens left their homes in the morning. Joyce Albarelli, class of 1949, remembered the walk to the Edmunds building as a social time. She'd leave her home on Luck Street in the Old North End and pick up classmates along the way.

Ruth Wallman, class of 1960, also walked to school every day, from her house on Colchester Avenue, wearing the current fashions: a pencil skirt, a blouse with a Peter Pan collar, a sweater, bobby socks and flats — no matter the weather. In the colder months, she'd be so frozen when she arrived that she would have to stand by a big radiator to warm up.

Once inside the aging building, there was a distinctive smell, she remembered, of "wax and dust and probably some dirty socks."

At lunch time, some high schoolers would hurry the two blocks down to the Hitching Post restaurant for a tuna or grilled cheese sandwich, said Meda Lowell, a 1960 grad. Since students were "regulars" at the spot on the northeast corner of Church and Main streets, the waitresses knew their orders by heart and would "slap it down on the table," Lowell recalled.

Church Street, which didn't become a pedestrian walkway until 1981, was "the center of everything" for students. tweet this

Church Street, which didn't become a pedestrian walkway until 1981, was "the center of everything" for students, Lowell said. High schoolers cruised in their cars up and down the thoroughfare. During hunting season, vehicles would pull up at the corner of Church and Bank streets with deer — and occasionally a bear — strapped to them, and then use the big game weigh station at Wood's Sporting Goods, she remembered.

The YMCA, just a block from the high school at the corner of College and South Union streets, was another popular hangout. Opened in 1934, it housed Vermont's first indoor pool, a basketball court, a snack bar and a bowling alley.

Edmunds lacked playing fields and had limited gym space, so student activities spread across the city center. Fans cheered the football team at South (now Calahan) Park; teams practiced at Roosevelt and Smalley parks. Lowell, who was a cheerleader, remembers evening basketball games at Memorial Auditorium, which also housed sold-out student productions of West Side Story and The Pajama Game in the early 1960s.

Alums also recalled working at downtown businesses now long gone. When Flora Palm graduated in 1948, students were on one of three tracks: basic, commercial or college-bound. As a commercial-track student, she found a job with the school's help at Woolworth's department store on Church Street, earning 35 cents an hour in the hardware department. 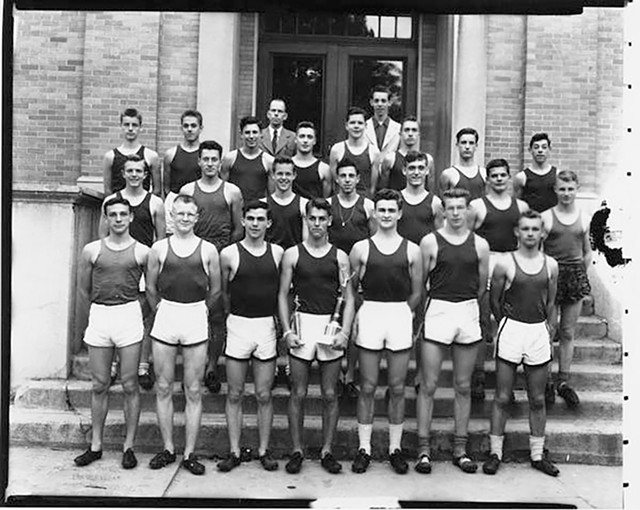 During her senior year, she told her guidance counselor that she wanted to be a certified public accountant, but he rebuffed her.

"He said, 'That's a lot of hours, and that's just not a woman's job, but ... I'll keep you in mind in case something comes up,'" Palm said. That spring, he helped her secure work as a secretary, just up the hill at the University of Vermont. She started on a temporary basis and ended up staying for 10 years, she said.

Wayne Conner, a 1964 graduate, also had a job at UVM. He recalled walking up the steep Main Street hill after school so he could assist a professor doing experimental work with different kinds of grasses. The money from that job helped Conner pay his way through college at UVM.

Albarelli, the 1949 grad, worked after school and weekends as a waitress at Concord Candy Kitchen, a casual restaurant on the corner of Church and Bank streets. When she finished her shift around 7 or 8 p.m., she would have dinner or ice cream with her friends who worked there.

Burlington High School students were not the only ones hanging out and spending their money downtown. Cathedral High School, a Catholic school, sat at the intersection of Pearl and St. Paul streets. Pat Robins, a retired businessman and 1955 Cathedral grad, recalled in an email that his alma mater and Edmunds "were #1 opponents in all team sports." Students from the two schools otherwise didn't interact much, save for those who had "personal connections outside of school," he said.

"I was so glad when they took over Macy's. To me [BHS] should be downtown." Meda Lowell tweet this

Cathedral relocated to South Burlington and became Rice Memorial High School in 1959. With Burlington High School's departure from Edmunds five years later, the downtown was without high school students for 57 years — until now.

"I was so glad when they took over Macy's," Lowell said, noting that students were "isolated" on Institute Road. "To me, they should be downtown ... I'm curious to see if they like it."

School administrators, too, hope that students will like their return to downtown and find opportunities that weren't available in the school's more suburban setting off North Avenue. The district is discussing partnerships with nearby institutions such as the Flynn and ECHO Leahy Center for Lake Champlain. Students could more easily participate in internships with local businesses.

Choral director Billy Ray Poli said he's excited about the possibility of holding pop-up musical and theatrical performances on Church Street and the waterfront, in front of an audience. 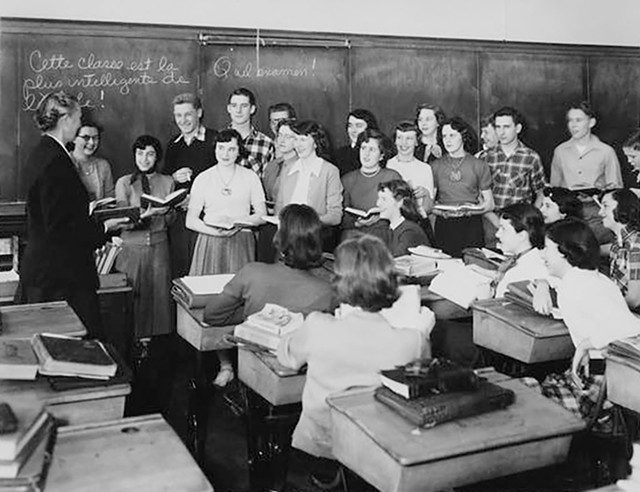 "Transportation was holding us back before," Poli said. "The fact that all of this is now, literally, within a 10-minute walking distance — we're able to access so many different aspects of the community that we just never had before."

Queen City businesses are eager to welcome students back to the center of the city.

"I think everyone from City Market to Ken's Pizza is aware of the upside," said Kara Alnasrawi, the City of Burlington's director of business support.

Last week, the Church Street Marketplace delivered packets of coupons from local businesses to students at the downtown campus. Pokéworks, a poke bowl chain on Church Street, attached its coupons to cans of Hawaiian fruit drinks. 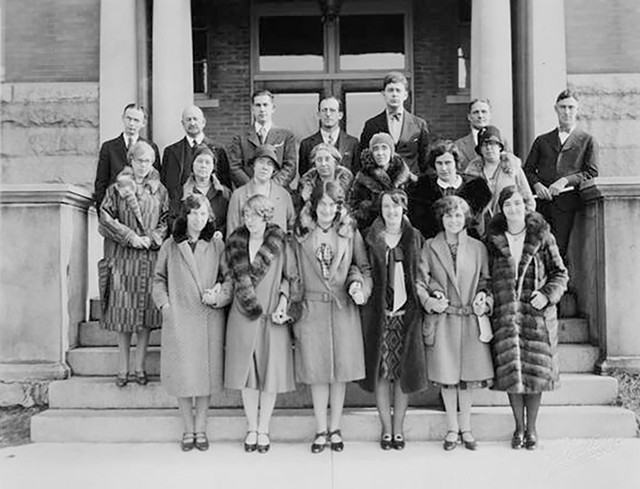 "It's been really fun to see the outreach that's been pouring out for our faculty and staff and our students," interim principal Lauren McBride said.

Church Street biz Tradewinds Imports promoted a giveaway for a sterling silver seahorse necklace in honor of the high school's mascot, she said. Another retailer, Monelle Vermont, is selling sequined change purses that say "I love BHS." Hotel Vermont and Vermont Federal Credit Union have stopped by with treats.

And, in a gesture that recalls simpler times, parishioners from Cathedral Church of St. Paul, located down the street from the school, plan to bake 70 dozen cookies and hand them out to students and faculty at the end of March — an event being dubbed Cathedral's Cookie Caper.

The students "have been through so much," said organizer Penny Pillsbury, whose kids, now grown, went to Burlington High School. "It just seemed to be the welcoming thing to do."

The original print version of this article was headlined "School at the Center of Things | As Burlington High School returns downtown, alumni recall an earlier era"