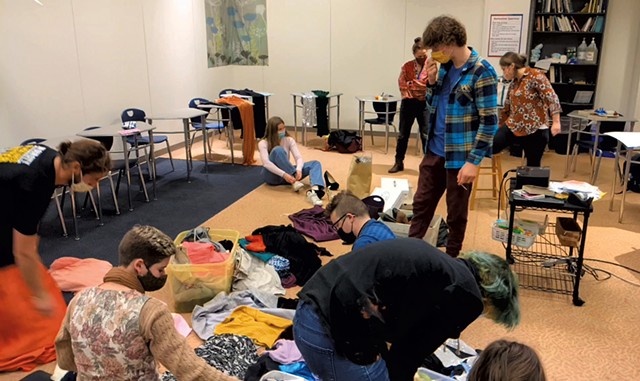 The school, which partners with South Burlington and Winooski High to field the Seawolves football team, will host a drag ball at halftime on Friday, October 15, during a contest against St. Johnsbury Academy. Put on by the school's Gender-Sexuality Alliance club, the event will feature some 30 students and staff from the Burlington and SoBu high schools strutting their stuff on a catwalk before performing a lip sync of "Rainbow Reign" by Todrick Hall.

"I think it's hard for boys to express an effeminate side of themselves, and often that might be the side they love the most," said Andrew LeValley, a Burlington English teacher and faculty adviser to the club. "So this is a moment for them to literally put that on for the world to see, and take a few minutes and walk down a runway and be proud."

LeValley said he and a friend came up with the idea, then brought it to club members, BHS principal Lauren McBride and Burlington athletic director Quaron Pinckney, all of whom were "on board excitedly."

Putting on a drag show at a football game, long considered a tough-guy sport, is part of the point, LeValley said. A National Football League player on the Las Vegas Raiders recently came out as gay, and there are surely more in the league, he noted. Why can't football also have a softer side?

"We have to assume that there are LGBTQ folks everywhere, which include[s] really masculine spaces," LeValley said. "Why does this space have to be one way or the other? It can be both, and there's beauty and benefits in having it be both."

Judging from a recent spate of bad behavior at Vermont high school sporting events, LeValley acknowledged that some "haters" could show up and make a stink.