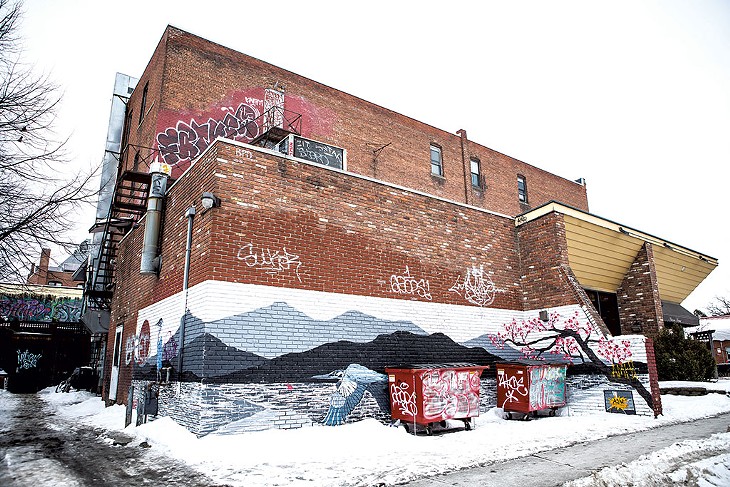 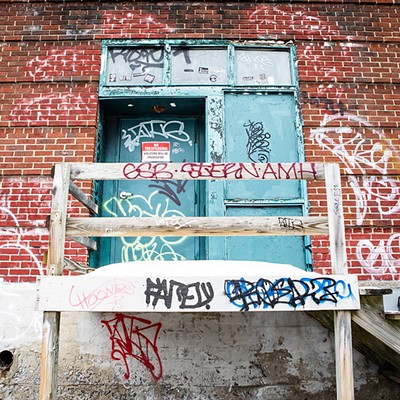 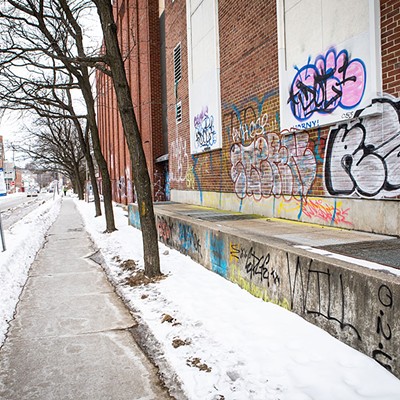 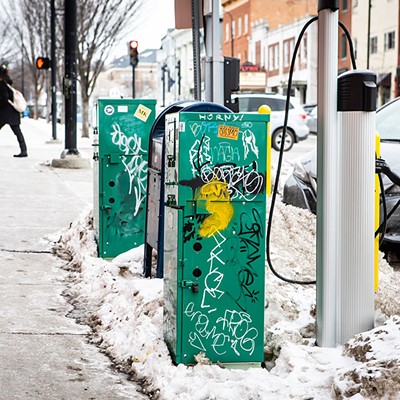 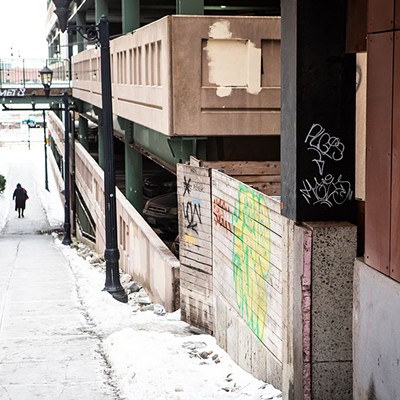 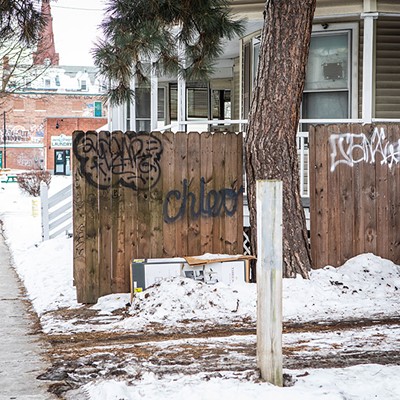 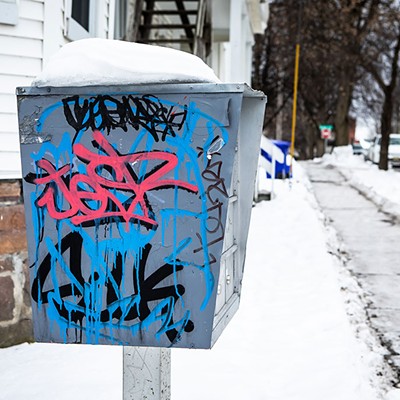 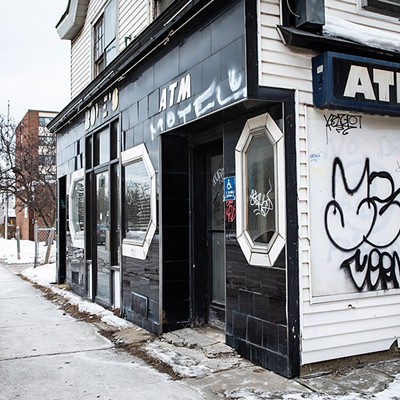 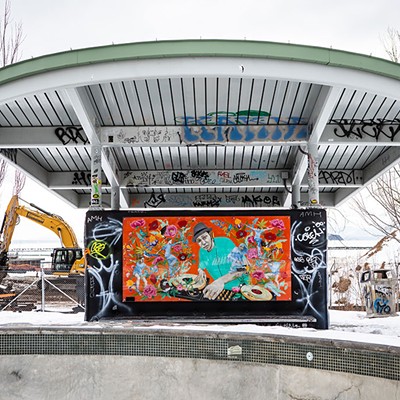 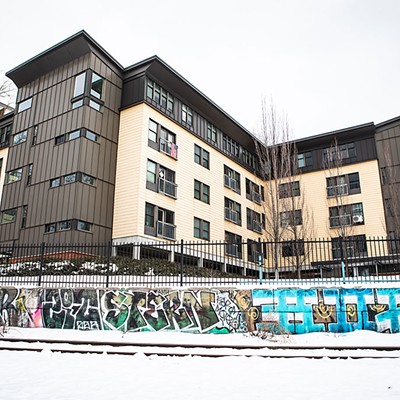 Last spring, when coronavirus lockdown restrictions were first lifted, Jamie Bedard painted a mural on an exterior brick wall of Asiana House, a restaurant on the corner of Pearl Street and South Winooski Avenue in Burlington.

She rendered her landscape in gray and black, with a flowering pink tree on the side where she signed her work. The idea for the painting emerged from a project at Folsom Education and Community Center in South Hero, where Bedard teaches art; the students were studying Chinese ink painting.

"My joy is to bring beauty to things," said Bedard, 37, who grew up and lives in Burlington.

In the fall, graffiti writers marred her mural, leaving their tag, or signature, in white, purple and yellow paint. One tag, which appears to read "AMHI," is near the spot where Bedard signed her name in black. By encroaching on the mural, the taggers violated what local artist Scottie Raymond described as an accepted code of graffiti artists: Don't paint over someone else's work.

Bedard takes the tagging on her work in stride; she views it as an opportunity to go out and paint again, she said. But whatever one's view of writing graffiti on someone else's property — or artwork — there's a consensus that the practice has been on the rise in Burlington in recent months.

From November 2020 through the first week of February 2021, the Burlington Police Department received 48 reports of graffiti, according to Deputy Chief Wade Labrecque. That's more than double the roughly 20 incidents reported from November 2019 to late January 2020.

There were 174 incidents of "graffiti vandalism" reported to the Burlington police between January 1, 2020, and February 15, 2021, according to the department. The police issued six citations during that time, including one "linked to 21 separate ... incidents," Labrecque wrote in an email.

"This shows how hard it is to catch and prosecute these types of crimes," he wrote. "Especially now with no Street Crimes Unit." Penalties for a criminal charge vary depending on the monetary cost of the damage.

In his 20 years on the force, Labrecque has seen "ebbs and flows" in tagging around the city, he said. He suspects that about 10 people bear most of the responsibility for the recent rash, attributing the rise to several factors.

First, the unseasonable warmth of early winter allowed the activity to continue longer than usual. (Cold affects paint's adhesion; snow buildup makes it harder to access rooftops.) Second, with bars closed and restaurant hours reduced during the pandemic, fewer people are out to act as deterrents or report suspicious activity. "People aren't on the phone saying, 'There's kids in the alley,'" Labrecque said. 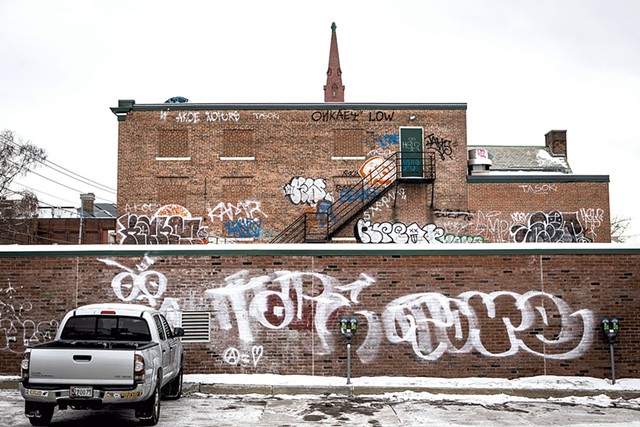 Labrecque also cites the reduction in the size of the police force that led to the reassignment of three officers in the "very flexible" street-crimes unit to basic patrol. Before their reassignment, those officers "would work in plainclothes at night, during the time this would be happening, in unmarked cars or [on] bicycles," he said, "to be around and catch people in the act."

Yet another factor that currently complicates catching graffiti artists is the use of masks, Labrecque said. Taggers are tough to identify when wearing face coverings in compliance with COVID-19 guidelines.

"Some of these people are actually very good artists, when you move away from the tags," Labrecque said. "It's pretty impressive." He based his assessment on notebooks he's seen over the years when police have caught taggers or suspects have dropped their backpacks when fleeing the cops.

Seven Days was unable to find a current graffiti artist willing to speak on the record, but Raymond acknowledged the rise in stealth graffiti writing. He started doing graffiti about 30 years ago as a teenager in New Jersey. He now owns Ante Gallery in Shelburne and is a cofounder of Anthill Collective, which organized, pre-pandemic, a Burlington graffiti festival called Above the Radar.

"There's a surge of kids in this whole quarantine situation [wondering], What the fuck am I going to do all day?" Raymond said. "All of a sudden there are 20 or 30 [graffiti] writers around the city, all brand-new to the activity and learning it on the fly together." 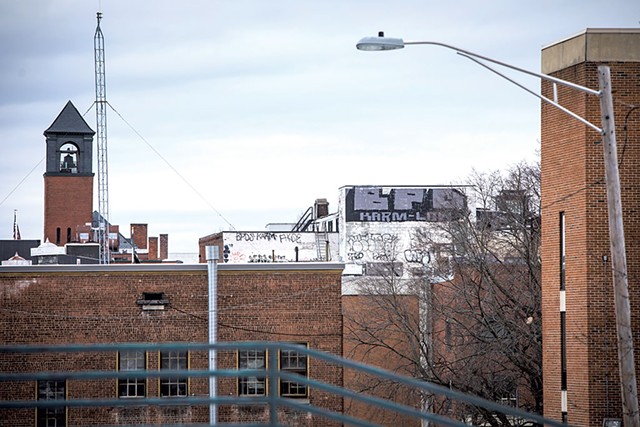 Teenagers who get into graffiti could be driven by "being totally fucking fed up with a system that doesn't pay any attention to them," Raymond said. "And being fed up with looking at a gray wall."

He described graffiti writers as "like a million lone wolves."

"There are little microcosms inside every city," Raymond continued. "As you evolve and get more involved in the activity, that's when you start to build relationships."

People who are "scribbling their names on buildings oftentimes don't really know much about it yet," Raymond said. "A lot of teenage kids ... haven't had a mentor or someone to talk to them about what is off-limits" — namely homes, houses of worship and other people's artwork, he said.

Raymond said he has "mixed feelings" about the surge in Burlington.

"That kid went for it. He climbed all the way up there, and he did that. It's like, Who the hell cares? Who is he bothering?'"

"Stern" is one of the more prolific graffiti writers in town. His tag and others bother property owners who say they spend money and time to remove graffiti from their buildings, only to have it reappear.

"It's constant upkeep," said Mark Lundie, 51, property manager of the Masonic Temple building at 1 Church Street. "If people like me didn't try to keep up with the graffiti, you wouldn't even know where you lived."

En route to work from his home in South Burlington, Lundie often photographs new graffiti that he spots along the way. He also documents new tags on or near Church Street, such as some that appeared in late January on the Richardson Building, which houses Kru Coffee.

Graffiti may pose a material threat to historic buildings such as the Masonic Temple, which dates back to the late 19th century. Painting over or removing tags can cause deterioration of the brick and mortar, Lundie said.

"If people like me didn't try to keep up with the graffiti, you wouldn't even know where you lived." Mark Lundie tweet this

Last fall, One Church Street Partnership, the building's owner, spent about $3,500 to install lights and cameras on its Pearl Street wall to deter taggers, Lundie said. The wall hasn't been tagged since, but the building's back wall has, he said. 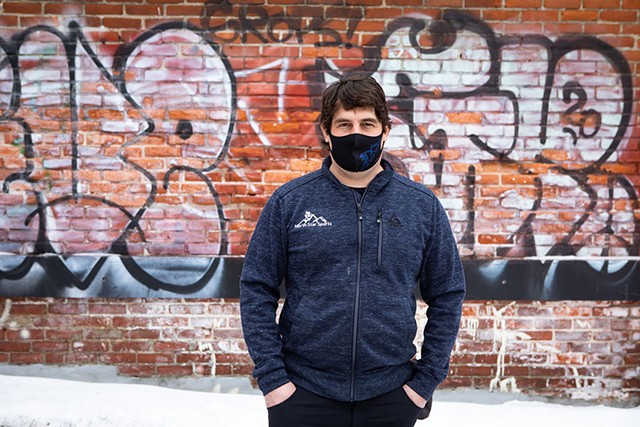 J.P. Coseno, manager of North Star Sports, finds it "disheartening" dealing with the graffiti on his family's Main Street building, he said.

He's sometimes tempted simply to leave the graffiti on the back wall, because painting over it typically results in another tag within weeks. Power washing isn't an option, said Coseno, 45, because it damages the brick.

"I'd rather have a brick wall," he said, which would be "historically accurate." But he's compelled to address the graffiti, to paint over it, and then paint over more of it again.

"It's kind of like having a car," Coseno said. "Do you want one green door on this gray car?"

Kelly Devine, executive director of the Burlington Business Association, described this as an anxious time for business owners in the city; many establishments are shuttered or temporarily closed because of the pandemic. Graffiti doesn't help.

"What causes concern for downtown business owners is when customers mention it," Devine said. "And customers are mentioning it."

According to Bill Ward, the city's director of permitting and inspection, addressing graffiti takes a team approach: Community members, businesspeople, law enforcement and city departments must all do their part.

Ward noticed a graffiti uptick in the early weeks of the pandemic, he said. He and members of his department painted over it repeatedly last summer and fall, including at the city-owned Memorial Auditorium — which is heavily tagged — Asiana House and an adjoining structure. During a warm spell in early December, city workers painted over blue graffiti on the former Blodgett Ovens building on Lakeside Avenue, now part of Hula. Its message: “Coronavirus is Lame + fuck capitalism.”

He described Burlington's current crop of graffiti as often "just a sloppy mess ... Other times we've seen it where it's been more stylized graffiti, where it has more artistic flair."

Street signs also get their share of tagging, but that practice doesn't appear to be on the rise. In 2020, Burlington's Department of Public Works cleaned graffiti from 552 signs and replaced 129 others at a total cost of more than $40,000, according to department director Chapin Spencer. In 2019, 729 signs were cleaned and 66 replaced.

Guy Neveu, 84, a retired hairdresser, owns the buildings that house Fu Da Chinese at 187 Pearl Street and Artisan Vapor & CBD at 18 Pearl. The vape shop has never been tagged; Neveu's other building, with a high brick wall, is routinely hit with graffiti. 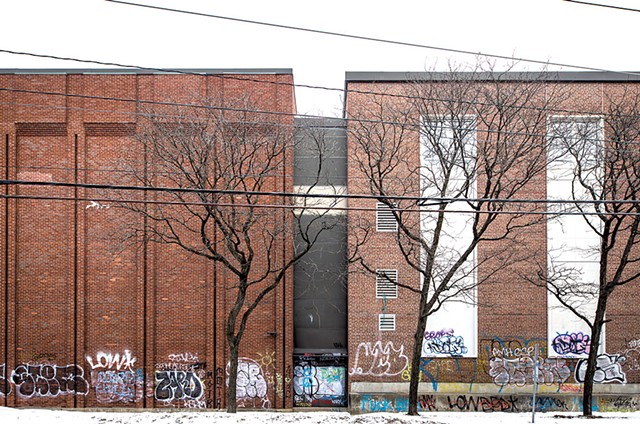 Recognizing that there's little he can do about the graffiti, Neveu nonetheless proposed one idea: "To paint [the tagger's] body with every color," he suggested. "That probably would change his mind after a while."

In the aughts, the city had a formal graffiti removal program that operated through the Burlington Community Justice Center. But that program, which involved restorative justice for graffiti offenders, ended about six years ago, according Rachel Jolly, the center's director.

In the past five years, the Community Justice Center has received roughly 20 referrals for graffiti, according to Jolly. The figure strikes her as low "compared to the amount of graffiti that we all see is happening."

The defunct city program worked in collaboration with Bruce Wilson, who in 2002 founded a graffiti-abatement program called Arts So Wonderful, he said.

"Graffiti was crazy back then," Wilson said. The organization worked with youth who were remanded to the program to remove graffiti. They also painted murals as a preventive measure, Wilson said. 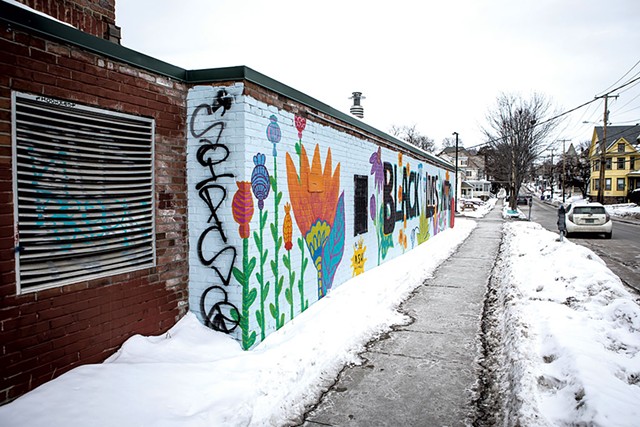 Now Arts So Wonderful has a gallery in the University Mall in South Burlington and organizes mural painting in Burlington. Bedard's mural at Asiana House was painted under the organization's auspices; so was the Black Lives Matter mural, near the intersection of South Union and College streets, that Bedard and others created last summer.

The Asiana House mural isn't the only work of Bedard's that has been tagged. A mural she painted at Pearl Street Beverage with the image of her "goofy husky" was covered by graffiti. She was "saddened" by that, she said, because the dog, with her "Free Kisses" collar, was meant to make people smile.

"I think a lot of people view the tagging as kind of like a bummer," Bedard said. "If you were creating things that were more colorful, or making a statement, I think people would think about it less as vandalism and more as: My building is helping people have a voice."

Wilson of Arts So Wonderful dreams of bringing the graffiti artists back into the fold rather than punishing them. "At the end of the rainbow, I want to have artists who are bombing the street put their art on canvas, hang it in a gallery and sell it," he said. "And I'll give them 100 percent of the proceeds from their art."