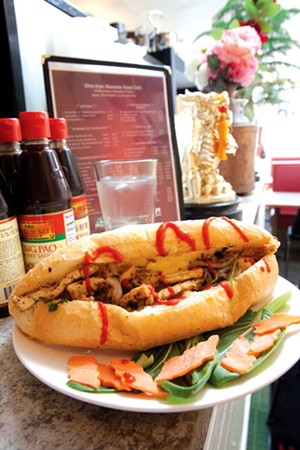 Dharshan Namaste Asian Deli has been a hit in Winooski since 2013. Now married owners Thanh Pham and Bishnu Gurung hope to repeat that success with a second location at 1353 North Avenue in Burlington — right next door to their third Namaste Asian Market, which they opened at 1355 last summer.

According to Pham, when Sofia's Pizzeria closed in that space, expanding the couple's pan-Asian empire was an obvious next step. "We have the market there, and I think a lot of customers from North Avenue have to travel all the way to Winooski [for a meal]," he says. "I think this is a good location."

Pham hopes to open in mid-March, after he's completed paperwork and cleaned up the space. Then he'll start serving Queen City diners the spicy wings, pho and Nepali chow mein they've gotten to know in Winooski.

On Sunday, January 25, the owners of Mi Casa Kitchen & Bar in Stowe took to Facebook to bid their diners adieu. "It was a fun run and Mi Casa is now closed for business. Thank you to everyone who supported our endeavor!" wrote Paul and Laura Biron. "Thanks for helping to make our dream a possibility, and we look forward to our next adventure!"

The Birons didn't return calls by press time to fill us in on what those adventures might be. Mi Casa opened last May in the circa-1830 Butler House, where the family also runs an upstairs lodging. The restaurant replaced Frida's Taqueria and Grill, whose owners have since moved on to Phoenix Table & Bar on Stowe's Mountain Road.

When Art and Claire Jilandharn closed Ocha Thai Restaurant on Main Street in Waterbury in early 2013, it was a reluctant exit. "We didn't want to close," Claire tells Seven Days. "But the landlord asked us to close it. So we've been looking for a spot for a long time." A few months ago, the Jilandharns landed a place on the Waterbury-Stowe Road, and they now say they'll reopen the restaurant in early March.

That's great news, Claire Jilandharn says, since former customers kept begging them to bring the restaurant back. "People would come to [their other restaurant] Royal Orchid [Thai Restaurant, in Montpelier] and ask why we closed." More recently, those fans have been stopping by Ocha Thai's new location to ask when it's going to open.

Though it's a return, the hotly anticipated revival will be a bit different from the original. The space is tiny — only 18 seats — and, with just one cook in the kitchen, Jilandharn says she plans to emphasize takeout rather than in-house service. The menu will be less extensive, as well, but still feature dozens of dishes. Those include all of the classics: creamy tom kha coconut soups, fresh spring rolls, chopped-meat salads and stir fries and, of course, creamy red, green, yellow and massaman curries and noodle dishes.

Beverage service will be limited to nonalcoholic drinks, but Jilandharn says those looking to temper the Thai spice with a beer or wine are welcome to BYOB.