On a sweltering May afternoon, Janine Ndagijimana exited a greenhouse at the Intervale Center in Burlington, balancing a tray of African eggplant seedlings in each hand. The seedlings' stalks stood upright, while their leaves, lush and full, spilled out of the small black plastic pots.

Her mother had requested 400 plant starts from her, said Ndagijimana, as she loaded the trays into her car to be shipped to Michigan. There her mother grows the same crop; during the harvest season, both mother and daughter sell African eggplants to their friends.

Ndagijimana, however, has a larger customer base for the 5,000 pounds of African eggplants she harvests annually from the Ethan Allen Homestead and a leased plot in Colchester. She sells about 3,000 pounds of the fruit to customers in Arizona, New Hampshire, New York, Texas, Utah and Virginia. She distributes the rest of the unsold fruit to family and friends.

So far, her customers are members of the African diaspora, some of whom heard about her business through word of mouth. "They call me and ask about the eggplants," said Ndagijimana through an interpreter, "and then I send the eggplants through the post office."

But now Ndagijimana, 38, wants to scale up her business — Vermont African Eggplant Farm — by introducing the fruit to people who didn't grow up eating it. "I am looking for a bigger market," she said.

Known as intore (pronounced "een-ori") in Kirundi, the language spoken in Burundi, the African eggplant is a perennial crop in subtropical climates, closely related to eggplant varieties grown in North America. It can grow about 7 feet high, according to Global Food, Local Food: Guide to Growing, Harvesting & Preserving African & Asian Crops in the Northeast, by Alisha Laramee of the Burlington-based Association of Africans Living in Vermont and Ben Waterman of University of Vermont Extension's Center for Sustainable Agriculture.

Mature African eggplants aren't deep purple like their North American counterparts; farmers pick the crop while still white or a ripe green, or they leave it to redden when harvesting it for seed. African eggplants are generally served in stews or stir-frys; their extracts contain high levels of antioxidants. The fruit is sour when it's green but sweet when it's white, said Ndagijimana. The Bhutanese community prefers the green fruit, she added. Some, including her, eat the white fruit raw, "just like an apple."

Yet the African eggplant is difficult to find in North America outside metropolitan areas, said Eric Bishop von Wettberg, an assistant professor in UVM's Plant and Soil Science Department who has expertise in genetics and crop breeding.

"She's just one step ahead of everyone." Alisha Laramee tweet this

The fruit often tastes bitter to palates unused to them — and, because the crop rarely leaves the African continent, few westerners have experience with it. To the best of von Wettberg's knowledge, the U.S. Department of Agriculture hasn't even been keeping statistics on the African eggplant.

Farming is nothing new to Ndagijimana. Born in Rwanda to Burundian refugees, she helped her parents with small-scale cultivation. When the Rwandan genocide began in 1994, she and her family fled to Tanzania. There she became a broker and developed her entrepreneurial skills, buying vegetables from farmers and selling them at markets.

In 2007, Ndagijimana and her husband and children came to the U.S., where she got involved in the New Farms for New Americans program. A community-based gardening and agriculture project run by AALV, it provides education and training to refugees and immigrants who want to continue their agrarian traditions. Participants get access to the community farms at the Intervale and the Ethan Allen Homestead.

AALV program specialist Laramee says that Ndagijimana stands out among the New American farmers for her entrepreneurial drive. While most of her peers are content to work the land to provide mainly for their families, Ndagijimana has grown her business. In Burlington, she sells her eggplants at the Mawuhi African Market and a handful of restaurants, including Butch + Babe's. Laramee noted: "She's a businessperson. That's her strength."

Besides being "very hardworking and determined," Ndagijimana is "forward looking," continued Laramee. When the other farmers learned that she was selling her produce to the small local stores that serve New American consumers, they followed suit and began to undercut her prices. Undeterred, Ndagijimana found a new niche in selling plant starts and seeds. "She's just one step ahead of everyone," Laramee said of Ndagijimana. "She has new ideas that other people haven't thought of yet." 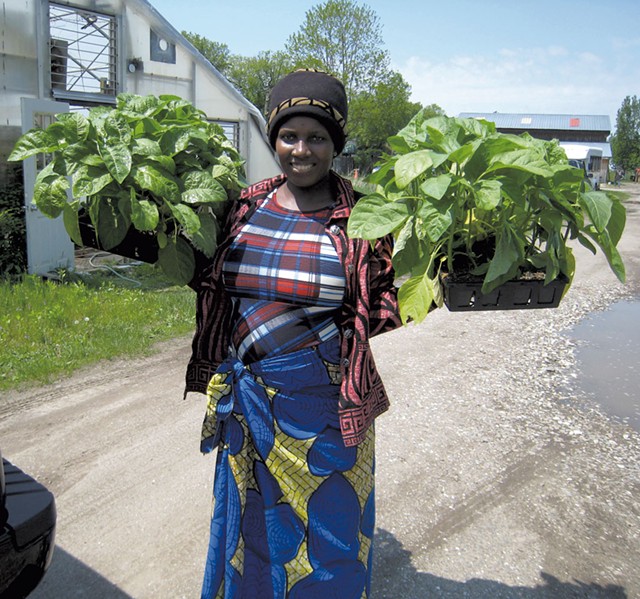 Ndagijimana isn't the only New American who aspires to become a commercial farmer. But for most, the risks are too great, said UVM's Waterman, who has worked as a program coordinator with Ndagijimana and many other New American farmers. Under pressure to settle down and pay their bills, many refugees and immigrants are wary of taking on debt, he added. "Farming might be one of the toughest jobs," said Waterman, "[and] the least-paying job to start."

But Ndagijimana, whom Waterman called "brave," has taken calculated risks. For instance, she invested in black plastic mulch as a weed-control strategy and came up with the idea of shipping eggplants to her customers via U.S. mail. "She's figured out on her own that that works and makes sense," said Waterman.

When it comes to besting the competition, however, Ndagijimana's leverage point is the bigger and stronger plants she can grow in the greenhouse owned by the AALV's New Farms for New Americans in the Intervale, said Waterman. In just two months, the plants of this year's crop have become small bushes, each measuring 2 feet in diameter and height.

Besides receiving business development and technical support from New Farms for New Americans, Ndagijimana has benefited from the help of a local hay farmer, Gene Button. Having leased her his Colchester farm at no cost, he's now helping her plow the land. "I wish there were more farmers out there like him," said Waterman of Button. "Land access is critical, especially in urban and suburban areas where there's a real need." Waterman also said that Ndagijimana has been able to build two greenhouses on Button's land with support from the USDA.

For his part, Button just wants to make sure his land doesn't sit idle. "It's always provided a living for the family," he said. "I'd like to see it continue doing that."

One problem Ndagijimana faces in her efforts to expand her business is her lack of proficiency in English. Last year, Anson Tebbetts, secretary of the Vermont Agency of Agriculture, Food & Markets, toured her Colchester farm, but she hasn't taken him up on his offer of help because of the language barrier. "I don't know where to start," said Ndagijimana, who attends English classes during the winter months.

Ndagijimana will have to overcome other obstacles before she can sell her crop to mainstream markets, said Waterman. While she's "growing her [farm] by leaps and bounds," he noted, "she doesn't quite have the acreage right now to support a larger-scale operation."

To sell to supermarkets, Ndagijimana would need both more product and food safety certification, which involves a potentially time-consuming and expensive auditing process, Waterman continued. But her biggest hurdle may be cultural: Mainstream consumers need time to learn about and accept the African eggplant.

Geneticist von Wettberg compared the fruit to the tomato and potato, which were equally unfamiliar to Europeans when the foods first arrived from the Americas near the end of the 15th century. It took several hundred years for the public to catch on, he noted, but by the 1840s, the potato had become Ireland's food staple.

Unlike, say, tomatoes or corn, the African eggplant remains understudied by the plant-breeding community, said von Wettberg. He believes new, cultivated varieties of the plant, including ones with a lower level of bitterness, could offer great potential. Meanwhile, he hopes to feature Ndagijimana and her crop in his crop-breeding course.

Despite the challenges, Ndagijimana is confident she'll be able to break into new markets and proud of what she's already achieved. "When I started, I never knew I was going to be here today," she said. "I keep trying, because I know at some point people will start buying them."

Ndagijimana's positivity is infectious, said Waterman. "I want to be optimistic about helping people learn about her operation and how she contributes to the food system."

Focused on achieving her biggest dreams, Ndagijimana has plenty of motivation to keep expanding her eggplant business. "I would find the money to pay for my children to go to college," she said, "[and] I could buy my own house."

The original print version of this article was headlined "Eggplant Entrepreneur"