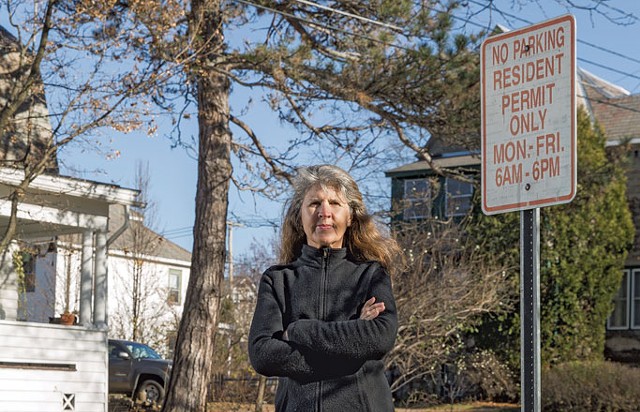 Damian Dryjas skateboarded along Burlington's North Union Street, dodging the whizzing traffic and skirting the cars parked bumper-to-bumper at the crowded curb. The 21-year-old Champlain College student had just sold his truck, he explained. He was forcing himself to end his wasteful personal transportation habits.

Rather than walk 25 minutes from his apartment on North Union Street to class, Dryjas used to climb into his truck and steer it as close as he could to campus. He would cruise Maple and South Union looking for a free spot not marked "residential parking only."

The intense competition for on-street parking meant that some days, Dryjas would have to circle for more than 25 minutes, arriving late to a class, or missing it altogether — all to avoid walking. "I was very frustrated," Dryjas explained last week. "I was like, Why don't I just walk to class?"

Burlington leaders, it appears, are asking similar questions with proposed changes to the city's 25-year-old residential parking rules. They want to charge for permits that are now free to residents, install meters on more residential streets and possibly allow public parking on streets now designated for residents only.

Also under discussion, although it's already generating privacy concerns: using license plate recognition technology to help enforce rules. Devices mounted on parking-enforcement cars, or on signs, would scan plates against a database to identify cars without permits and would also help enforce time limits.

The broad goal of the changes is to nudge motorists out of their cars. The more immediate concern is to update the muddled rules of the city's residential parking system. Created in 1990, the system has grown piecemeal to encompass 10 miles of curb and more than 3,200 permit holders, mostly in neighborhoods near downtown, Champlain College and the University of Vermont, where on-street parking is in strong demand.

Bradley Street homeowner Emily Lee, who serves on a residential-parking advisory committee, said free-for-all blocks are problems. As she described it: "You cannot find a spot on my street unless you win the jackpot."

But parking is personal in Burlington, and any adjustments — even when the status quo is messy and imperfect — rile people up. Simmering opposition to proposed changes to the city's Residential Parking Management Plan, which have been under discussion for 18 months, boiled over at a meeting last month.

The city was pushing unpopular changes and wasn't listening to residents, said Caryn Long, a longtime resident of Henry Street and also a member of the parking advisory committee. "It was just frustrating because we did feel like the city had a predetermined outcome," she said.

In response, Burlington public works director Chapin Spencer terminated a contract with the consultant hired to help oversee the public discussion, and he has backed off on some of the most controversial ideas. For example, a proposal to allow commuters who don't live in the city to buy residential parking permits has been nixed.

Commuters roam downtown neighborhoods daily for free spots, so the proposal could have brought revenue and organization to an unregulated practice. But many city residents balked at the idea, which would have been tested in a three-year pilot. They said it would have given colleges and other employers an official pass to dump their parking problem on neighborhoods.

Besides, the city should be working to get commuters out of their cars, not making it easier for them to park on residential streets, said Brett Hughes, a Russell Street resident who walks and bikes as much as possible. "It's a terrible idea," he said.

Spencer and his staff are revising the draft plan. It should be complete in early December. Then it will go to the Burlington Public Works Commission for consideration and possible voting on December 16. If accepted, there would be another round of public hearings and voting by the commission, and possibly the city council, before specific changes would become effective.

Some don't see the need for big changes. Advisory committee member Long helped advocate for today's residential parking program. For the most part, it's working, she said, and has helped protect the quality of life in neighborhoods.

She's glad her street isn't a "parking lot." On November 17, a Tuesday, curbside spots were available along historic homes on sloping Henry Street, where parking is for residents only.

By contrast, nearby Willard Street, which does not require permits for parking, was jammed with a messy crunch of cars curbside, many of them belonging to student renters.

Henry Street was among the first streets covered by the residential parking program in the early 1990s. Commuters had started to park all day on the formerly quiet residential street. UVM enrollment had increased, and sometimes six or eight people jammed into converted single-family homes with only two spaces for off-street parking.

The residential parking program spread after homeowners saw it could ensure them street parking. Today, the Public Works Commission has authorized the program on large swaths of central Burlington. To apply, residents must petition neighbors and show authorities that more than half of them want the system.

The commission approves many, but not all, requests, seeking to balance public and residential uses. Once granted, homeowners and renters are eligible for up to four passes per dwelling unit, all free, with two of the passes transferable to guests.

Even with several thousand passes circulating, violations are common. Tickets are $75, and revenue from violations more than pays for enforcement. In fact, the program is a moneymaker. In 2013, residential parking violations generated $324,000 for Burlington's general fund.

Charging for permits would bring in more revenue and possibly discourage people from obtaining permits they don't really need — which can make the program unworkable on some streets. On Bilodeau Court, for example, the city had issued 65 permits for the 24 available on-street parking spaces, according to a 2014 report. There is also anecdotal evidence that some people might be fraudulently selling or leasing their permits, according to Spencer.

Officials are considering charging $10 for the first permit, $20 for the second, $30 for the third and $40 for a fourth — a total of $100 for four. Permits would last one year for renters and two for homeowners.

The idea of even modest fees rankles some taxpayers. "I'd say that seems pretty insane," said James Laughlin, who lives at North Prospect and Loomis. "Aren't we already paying enough in property taxes?"

His annual taxes have increased from about $2,200 when he and his wife bought their house in 1995 to around $10,000 now. The permits should be free given that tab, he said.

A preliminary proposal to install parking meters on certain residential streets — already a limited practice — is also generating controversy. The plan does not specify which streets might get meters but refers to streets adjacent to parks and mixed-use and commercial areas. Ward 3 resident Liz Curry attended a residential-parking meeting last week to oppose the installation of meters on Old North End streets, where many low-income renters live. She said that the plan would penalize people who are already struggling to make ends meet and don't necessarily have off-street parking.

Some see single-family-home conversion as an ongoing problem and the root of neighborhood parking woes. The city's group-quarters ordinance, which limits unrelated occupants to four in a single-family household in certain parts of the city, isn't properly enforced, Long said. She and others also said the administration of Mayor Miro Weinberger should press much harder on UVM to house more students on campus.

Spencer vows to carry that message to the mayor. He believes, however, that some parking changes are warranted. He noted that the program covers 10 miles of curb in the city, "largely for the exclusive use of neighbors." While residents matter, he added that they don't necessarily own exclusive rights to parking in front of their houses or apartments.

Burlington needs more shared parking options, especially in the center of the city, he said. The city's effort to overhaul downtown parking, improve city garages and reorganize metering in the commercial center reflect this thinking.

The city is also committed to expanding alternatives to cars, Spencer said. That would mean convincing more people to follow the example of Dryjas, the North Union resident, to use their own power as much as possible.

Dryjas understands the position. Last Tuesday, as he prepared to skateboard to City Market, he seemed ready to accept the logistical challenges of not having a car. Not driving is better for the environment, Dryjas said.

It also means less worry about the $75 parking tickets many of his friends have gotten — a fate Dryjas wants to avoid. "Being a college student," he said, "I'm broke."