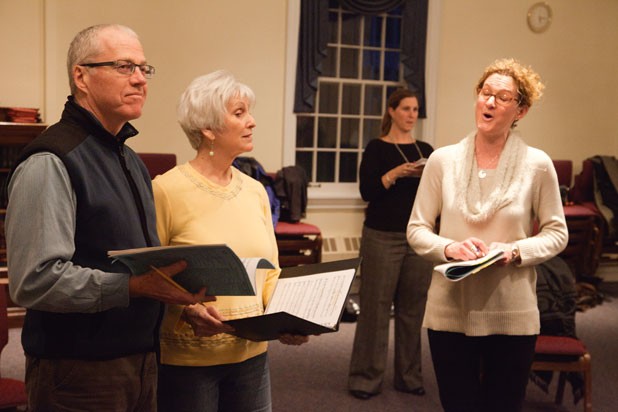 Early on in Henry Purcell’s Dido and Aeneas, the chorus urges Dido to cheer up because “grief should ne’er approach the fair.” Alas for the Carthaginian queen, this is opera, where the fair almost inevitably come to grief. By the end of this 1688 work, Dido’s Trojan lover Aeneas has abandoned her, and she has committed suicide.

But it’s not the story’s familiar tropes that have moved audiences for centuries; it’s Purcell’s music. “The music is absolutely, incredibly stunning,” says Bill Metcalfe, who will conduct a performance of the opera on Saturday afternoon at Burlington’s College Street Congregational Church. The semistaged production is a collaboration between Metcalfe’s early-music community chorus, the Oriana Singers, and Burlington Ensemble. BE founders Michael Dabroski and Sofia Hirsch will play violin in the five-member orchestra along with harpsichordist Elizabeth Metcalfe (Bill’s wife), violist Liz Reid and cellist Ariana Falk.

Metcalfe is an exuberant fan of the work; he has already directed Dido and Aeneas six times. Most of these performances have been with the 30-member Oriana Singers, and the most recent was in 2008 at St. Paul’s Cathedral in Burlington. When Dabroski approached him about joining forces on the opera for a concert in BE’s 90/10 series, Metcalfe jokes, “It took me probably about a quarter of a second to say yes.”

Like the conductor, the soloists have long experience with the work: mezzo-soprano Jill Levis as Dido, baritone William Bickford as Aeneas and alto Linda Radtke as the Sorceress will all be reprising their roles; and mezzo Aimee Bushey, as Dido’s sister Belinda, has performed other parts in the opera.

Levis, a voice teacher recently retired from the University of Vermont, will be singing Dido for the fourth time. She explains that in this performance, even the semistaging will be spare — a few symbolic costume accessories and some minor blocking — so as not to detract from the English Baroque composer’s score. “The music is so gorgeous that people will be moved by the sounds they’re hearing,” she promises.

Levis recommends listening to Emma Kirkby’s Dido for a taste of Purcell’s magic; for Metcalfe, no one surpasses Janet Baker. Both sopranos’ live performances of “Dido’s Lament,” the final and best-known aria, are available on YouTube.

For Dabroski, the opera made perfect sense, not just for its music and minimal staging requirements but because it lasts a mere 55 minutes. BE’s 90/10 concerts, which distribute 90 percent of profits among six local charities (Rock Point School is the highlighted charity at this concert), tend to draw “a lot of people who’ve never been exposed to classical music,” he notes. Some come to support the charities; others are drawn by the concerts’ ticket prices — a mere $5 in advance and a $10 suggested donation at the door. Staging a typical four-hour opera is “asking a lot” of such audiences, Dabroski says.

Anyway, Metcalfe opines, length is not necessarily a plus in conveying the classical story’s essence: “It takes Berlioz four hours to tell the same story [in his opera Les Troyens]. It takes Purcell one. And who’s to say which is more moving?”

Purcell’s Dido is not exactly Virgil’s tale. The composer and his talented librettist, Nahum Tate, added a Sorceress who, with her gaggle of witches, tricks Aeneas into leaving by taking on the form of Jove’s messenger, Mercury.

“[Purcell] knew what good entertainment is,” Radtke explains. The Sorceress soloist adds that witches were not just very English — “they come right out of Macbeth” — but quite real to people at the time: “Across the ocean, we were hanging them,” she points out, in the Salem Witch Trials of 1692. Radtke will wear horns. “I’ll be scary,” she vows.

The singer says she “used to think Baroque music was stodgy” but has since found it “full of variety and exuberance, and some of it is really poignant,” especially in combination with the timeless classical tale. “Who doesn’t connect to that sort of love story?” Radtke asks.