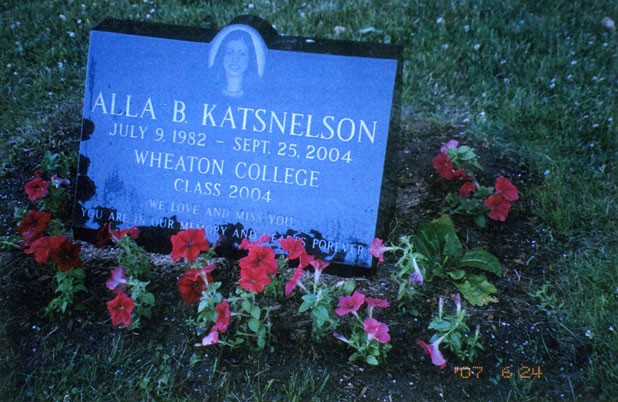 On Memorial Day 2007, Boris and Marina Katsnelson went to Lakeview Cemetery and planted flowers around the grave of their daughter, Alla, who died at the age of 22 in September 2004.

About two weeks later, the Katsnelsons visited the grave, in the Temple Sinai section of the Burlington graveyard, and saw that the flowers had been pulled from the ground. Not long after that, the couple planted another batch of flowers they were red - Alla's favorite color - only to discover, two days later, those too had been forcibly removed.

On July 1, 2007, Boris and Marina went to Lakeview and planted some pink petunias around Alla's black granite headstone. Before they left the cemetery, Boris videotaped the gravesite, as well as several others nearby that had also been adorned with flowers or plants. Then he turned the camera on Marina, who read a short statement that concluded, "We want to know who does such an awful thing."

But the Katsnelsons had already discovered the culprit. From the moment they first saw the bare earth around their daughter's headstone, the couple had in mind it was someone from Temple Sinai who had removed the flowers from Alla's grave.

The following morning, Boris set out to prove it.

With video camera in hand, he hid behind some bushes, about 15 feet from the headstone, and waited. After several hours, a woman in light-blue pants and a pale-yellow shirt approached the gravesite and began pulling up the flowers and stuffing them into a plastic grocery bag. The act took less than a minute, after which the woman drove off in a luxury SUV.

The Katsnelsons, who are both Jewish, would learn a short time later that the woman in the video was Carol Rubman, a member of the Temple Sinai cemetery board. They were hardly surprised: Since Alla's death, the couple and the Temple had been engaged in an increasingly acrimonious dispute over her grave, of which the planting and deplanting of petunias are merely emblematic.

At the center of the dispute is a more basic question: Who owns the very ground in which Alla Katsnelson is buried?

Next month, unless the Katsnelsons and Temple Sinai can reach an agreement in Chittenden Superior Court, Boris and Marina will likely be ordered to exhume their dead daughter and bury her elsewhere.

"In the last four years, we have our daughter's funeral every day," said Marina, who emigrated from Russia to the United States with Boris in 1994. "Every day, we have struggled to keep her dead body in the ground and give us some peace."

Alla Katsnelson was only a few months out of Wheaton College in Boston when she died suddenly, on September 25, 2004. A day or so later, Boris and Marina made arrangements through a local funeral home to buy three burial plots numbered 19, 20 and 21 from the City of Burlington in the Temple Sinai section of Lakeview.

While every Jewish congregation in the Burlington area has a burial ground set aside for its members, Temple Sinai is the only one that owns space in a city-owned cemetery. By 1997, those plots had been largely filled, so the Temple bought 26 additional gravesites from the city in an area known as Section 7A.

Alla was buried in plot 20 of Section 7A on September 29. Rabbi Joshua Chasan of Ohavi Zedek synagogue conducted the service. Alla's headstone was designed by her father, who is a draftsman for Cochran's Inc., a Barre company that makes burial monuments. Peter Burke, a salesman for Cochran's, says Boris' design, which features a drawing of Alla, was inspired by a headstone that marks the grave of another young woman in the Temple's cemetery.

Shortly after Alla's funeral, Temple Sinai's Rabbi James Scott Glazier visited Lakeview Cemetery. David Greenberg, an attorney for the Temple, said the rabbi was surprised to see that someone had been buried in Temple Sinai's section without his knowledge. While non-members, such as Alla Katsnelson, are eligible to be buried in the Temple's section, Greenberg says it must be approved by Glazier.

"The way our rules are, only our rabbi or his designee can perform services there," he says, "so that we have some control over the type of ceremony, and people feel comfortable that it's a Jewish cemetery."

Citing a "pastoral duty" to the Katsnelsons, Chasan declined to comment. He referred questions about his communication with Temple Sinai prior to Alla's burial to Glazier, who acknowledges that Chasan called to tell him that the Katsnelsons had planned to bury Alla in Lakeview Cemetery. However, he says, Chasan didn't make clear that the burial would take place in the Temple Sinai section.

"There was a series of mistakes made that led to this entire situation," Glazier recalls, "and I think that one of them was the lack of clarification as to where the burial would take place."

Another, more significant mistake had been made seven years before Alla Katsnelson's death. As Glazier's discovery of the grave revealed, the plots the city sold to the Katsnelsons weren't the city's to sell they had already been purchased, along with 23 others, by Temple Sinai, back in 1997.

Wayne Gross, director of Burlington's Department of Parks & Recreation, which has jurisdiction over the two city-owned cemeteries, said the sale was an honest mistake by a relatively new employee. "Somehow," Gross says, "our cemetery foreman didn't realize that the lots he was selling had already been sold to the Temple."

In May 2005, eight months after Alla's funeral, the city agreed to give the Temple three plots and sell them three others for $1350, as compensation for selling the three plots to Boria and Marina. The city also agreed to inform the Katsnelsons that they would have to return the deeds issued by the city and take new ones from the Temple. Greenberg said that didn't happen as quickly as he had hoped.

After the May settlement with the city, the attorney recalls, "I was still writing them, saying 'Where are our deeds? What are you doing to notify the Katsnelsons?' Nobody had contacted them."

Meanwhile, Boris and Marina say the Temple began confronting them with complaints about Alla's grave. At first, it was the headstone, which had never been approved by the Temple's cemetery committee. The Temple also took issue with corner markers placed by the Katsnelsons on their two other plots, on either side of Alla's, as well as with the flowers Boris and Marina had taken to planting on their daughter's grave.

Greenberg concedes that Alla's headstone is identical to another erected by a Temple Sinai family, and that other graves in the section have been adorned with flowers and plants. But, he adds, only the Katsnelsons have so brazenly flouted the Temple's cemetery rules, which now prohibit flowers and plantings on gravesites.

"It was clear they were never going to comply with our reasonable request," Greenberg says. "I would send them a letter, saying, 'Please don't plant flowers.' They would write back, 'Your rules don't apply to us. Other people have flowers, and we're going to keep putting in flowers.'"

If David Greenberg and Temple Sinai had hopes that the dispute could be settled out of court, they disappeared when Boris videotaped Carol Rubman pulling the flowers from Alla's grave. On August 8, 2007, shortly after learning of the videotape, the Temple sued Boris and Marina.

The initial suit, Greenberg says, merely sought to compel the Katsnelsons to abide by the Temple's cemetery regulations. Later, after the couple continued to challenge a ruling, by Chittenden Superior Court Judge James Pearson, that the city sold the plots in error, Temple Sinai amended its complaint, asking Pearson to order the exhumation of Alla's body.

Says Greenberg, "I'm at a loss to explain why we're still going at this. The judge has already decided [the Katsnelsons] do not own the graves. But they seem to be driven toward forcing somebody to say, 'You must exhume the body,' which they say they don't want to happen."

Indeed, on June 26, after several months of negotiations, the Katsnelsons rejected an offer from the Temple that would have allowed Alla to remain in plot 20. The couple, which has been through two attorneys and are now representing themselves, submitted a three-page response to the court. They dismissed the settlement offer as a legal maneuver that would "give Temple Sinai legal rights to continue harassment of the Katsnelson family in the future."

While it is difficult to read the settlement offer and imagine how it might be used to harm the Katsnelsons at some later point, it's clear that Marina and Boris are loathe to part with the original deed to the gravesites they purchased from the city. Even as they prepare for their next day in court scheduled for the end of August the distrust they feel toward Temple Sinai runs too deep.

Sitting in the kitchen of their New North End home, the Katsnelsons explained that accepting the offer would be tantamount to admitting they had done something wrong, opening the door to their worst fear: the exhumation of their daughter.

"The city and Temple Sinai created big mess," Marina said. "Why are they punishing us? Why not let us be where we are?

"If it is so important that we not plant flowers, we won't have the flowers. But I don't think it is such a criminal action that has to be punished by making us have a second funeral for our daughter."