The three-person Community Development and Neighborhood Revitalization Committee, which focuses on quality-of-life issues, met a month ago to discuss a proposal that would require landlords to have a "just cause" to evict tenants. Currently, landlords can evict renters for owing back rent or breaking provisions of their lease, but also for no cause at all. The proposal would require changing the city's charter and promises a spirited debate in Burlington, where more than 60 percent of households are in rental property.

Committee members agreed at a mid-September meeting to hire an assistant to research just-cause evictions. But the session, which lasted less than 30 minutes on Zoom, was never publicly warned. City staff didn't post the agenda online, at city hall or in two other public locations, as the law requires to properly "warn" a meeting.

Further, the committee actually had been meeting illegally in the days leading up to that single, unwarned meeting. The three councilors had discussed hiring the research assistant over email, which one of them later publicly characterized as a violation of the law.

"This was an inadvertent error that occurred." Councilor Brian Pine tweet this

After the session came to light, the committee held a redo meeting on Monday morning, in public. They voted again to authorize the hiring.

"We need to be focused on ensuring that we follow through on what the public needs and expects in terms of open discussion and debate of the issues," Councilor Brian Pine (P-Ward 3), the committee chair, said at Monday's meeting. "This was an inadvertent error that occurred."

This latest infraction illustrates a troubling trend. City councilors violated the open meeting law on September 8, when they invited racial justice protesters into an executive session to discuss police personnel. In response to a complaint from Seven Days, the council admitted on September 14 to violating the law and agreed to undergo training.

The committee violation was on September 16 — two days after the admission but before councilors took the October 5 training, which was conducted by media law experts who advised them to err on the side of transparency in their dealings.

But the process surrounding just-cause evictions has been anything but transparent. This month, Councilor Joan Shannon (D-South District) came under fire for inviting landlords, but not tenants, to testify at meetings about the eviction proposal. Renters and fellow councilors have called for Shannon to recuse herself from deliberations, but the councilor isn't budging.

For people on both sides of the debate, the councilors' behind-the-scenes dealings have overshadowed any meaningful discussion on the actual proposal.

"[Instead of] trying to solve these problems with the bad landlords and the bad tenants, they have created an adversarial relationship going forward," said Larry Miller, a Burlington resident and landlord. "I don't think that's going to solve anything for anyone."

Burlington voters first considered a just-cause eviction ordinance in 1988. Proponents, including then-mayor Bernie Sanders and now-Councilor Pine, argued that banning arbitrary evictions would provide stable housing for all Burlington residents. Opponents said the rule would infringe on their property rights. The ballot item failed at the polls that November, the Burlington Free Press reported.

The most recent campaign began in summer 2019, in response to Mayor Miro Weinberger's housing summit that June. The daylong event focused on the city's housing crisis, including how Burlington's 1.5 percent rental vacancy rate drives rent increases. Nearly 60 percent of renters in Burlington funnel more than 30 percent of their paycheck into rent payments; one-third spend more than half of their income on rent, according to 2018 data from the Vermont Housing Finance Agency.

Members of the Burlington Tenants Union, a group of nearly 400 renters, weren't totally satisfied with the mayor's summit. They approached the community development committee with a list of housing reform demands, including a ban on no-cause evictions.

Evictions are notoriously difficult to track because only a portion end up in court — about 1,700 a year statewide, according to a 2019 report by Vermont Legal Aid. Short of studying each file at county courthouses, there's no telling how many were for no cause.

"No landlord should have the right to kick a tenant out for no reason," said Christie Delphia, an organizer with the tenants union. 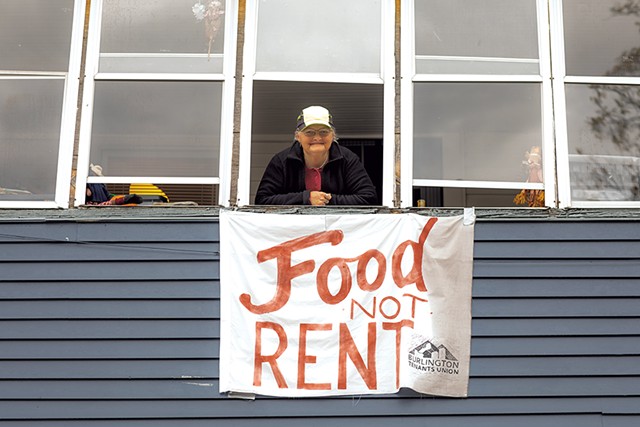 Delphia, 54, who lives on Riverside Avenue, said her landlord tried to evict her without cause in the summer of 2019. She thinks he was trying to retaliate against her for complaining about the condition of her apartment, where she's lived with her 75-year-old mother for two years. The eviction is pending in court, and the apartment still needs repairs, she said.

"This place is literally falling apart," Delphia said. "I'm sitting here watching the shim fall out of the windows that are on my front porch."

Delphia was a regular at community development committee meetings, where the just-cause eviction proposal was first vetted. So was Miller, who owns three rental properties. At one meeting, Miller gave an impassioned, 15-minute speech about his concerns with the proposal. Instead of a just-cause ordinance, Miller would rather see the city form a committee of landlords and tenants that could intervene in rental disputes and prevent evictions.

"At the same time, I can't just sit back and do nothing while people are trying to take away a tool that we really need," he said in an interview, referring to no-cause evictions.

Despite Miller's and other landlords' objections, the committee adopted the proposal in early August and sent it to the full council for review. Councilors agreed to have the Charter Change Committee consider the proposal for possible inclusion on the March 2021 ballot.

Miller began attending those meetings, too, and was confused when Councilor Shannon, the committee chair, mentioned that her colleagues on the community development committee had hired a researcher to prepare a fact sheet about just-cause evictions. The researcher's 14-page report, which compares other states' definitions of "just cause" and includes recommendations for Burlington's future ordinance, was posted on the city website last week.

Miller wondered how that committee had hired anyone when, as far as he could tell, it hadn't met since August. He didn't get an explanation until October 8, when Pine admitted that its members had voted to hire the researcher at the mid-September session that was never publicly noticed. In a follow-up interview with Seven Days, Pine blamed an "administrative breakdown" for the error.

"Staff always handles setting up the Zoom and public warning," he said, noting that the city staffer was new to working with his committee. "I'll take some responsibility as the committee chair for not checking to see if the meeting [was warned]."

Pine said he only found out that it hadn't been when City Attorney Eileen Blackwood asked him why the minutes weren't posted on the city website. The agenda, draft minutes and a recording of the meeting were posted to the city website only after Seven Days filed a records request for those documents last week.

Miller wants to give Pine the benefit of the doubt. He has since watched the meeting on YouTube and noticed that Pine — along with fellow Councilors Zoraya Hightower (P-Ward 1) and Sarah Carpenter (D-Ward 4) — appeared surprised that no one from the public logged on to speak. Other meetings had drawn an audience, he said.

"It sounds genuine, but at the same time, they also kind of mentioned that they had discussed [the researcher] prior to that meeting in some way," Miller said.

He's right. Hightower and Pine told Seven Days last week that all three councilors had emailed about the research assistant in August and even finalized her scope of work via the electronic communications. Hightower said she questioned at one point whether the email conversation was kosher, but the secret deliberations continued until August 31, when Blackwood told them that a quorum of elected officials can't make decisions via email.

"Sometimes we overlook these issues," Pine said. "We ... do the best we can, and if we make mistakes, we own up to them, and that's part of the process."

Councilor Shannon wasn't so forgiving. "How does that happen? Sarah and Zoraya — I get that," she said, referring to the council newcomers. "Brian? He's worked his entire life for the city." Pine was an employee of the city's Community Economic Development Office for 18 years, starting in the mid-1990s.

Pine was just as willing to throw stones at his colleague. In September, Shannon emailed code enforcement director Bill Ward and asked him to contact every landlord listed on a city database about the just-cause eviction proposal. The emails were first made public by community organizer Charles Winkleman and later verified by Seven Days. Shannon — who owns rental properties herself — said she didn't make an equal effort to notify tenants because their views had already been well represented and because the city does not have a comparable list of renters.

Pine thinks Shannon's logic is bunk: "To solicit the feedback of one constituency by saying that we've already heard from the other — that's not the way we should be proceeding," he said.

Delphia, the Riverside Avenue renter, emailed city councilors earlier this month to ask whether Shannon could be removed from the Charter Change Committee. Delphia argued that Shannon's position as a landlord creates a conflict of interest and that the councilor is the biggest obstacle to passing a just-cause eviction ordinance.

"She's doing everything she can to squash this," Delphia told Seven Days. "She knows if she pushes this past November, we have a very good chance of losing it, period."

City Council President Max Tracy (P-Ward 2) agrees that Shannon's landlords-only invite crossed the line. He suggested that the councilor could have found other ways to notify tenants, by asking the city's own public engagement specialists to help with outreach, for instance. Last week, he emailed Shannon and asked her to recuse herself from deliberations. The fact that she is a landlord "further complicates the situation," Tracy wrote.

Shannon said she's no more conflicted than any of the councilors who are renters — including her fellow charter committee members, Councilors Perri Freeman (P-Central District) and Jane Stromberg (P-Ward 8). Shannon declined to step back, instead promising to publicly disclose her landlord status at the next meeting that evictions are on the agenda.

Hightower said councilors commonly drum up support for their pet projects but said tenants are right to question Shannon's tactics. She also acknowledged that landlords are right to be concerned about her own committee's conduct. The missteps haven't exactly forged a sense of trust on either side, she said.

"It was going to be an emotional topic no matter what," Hightower said. "This hasn't helped."

The original print version of this article was headlined "Second Offense"