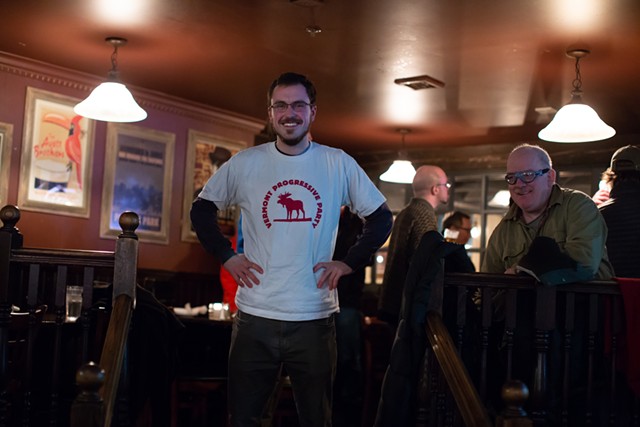 Hanson said his resignation is effective on Wednesday, once he turns in his city-issued laptop. Hanson has yet to apply for the job at the Burlington Electric Department but said he wanted to step down now to avoid any perceived conflicts of interest. The council approved the creation of the position, a net zero project and equity analyst, in June.

City attorneys told Hanson that he could stay on the council during the application process but would have to recuse himself from votes involving the electric department. Complicating matters, Hanson chairs the council's Transportation, Energy and Utilities Committee, which oversees the department.

"I would have to give up my primary area of work that I'm most passionate about, and also it still wouldn't, in my mind, fully address the conflict of interest," he said. "Ultimately, I felt like if I really want to go for it and do it right, it makes more sense to just resign at the beginning."

The city will hold a special election to fill Hanson's seat, a contest that could sway the council's partisan balance. With six of 12 seats, council Progressives can't unilaterally pass measures, but they can block proposals by forcing a 6-6 tie vote. Democrats attempted to eliminate that advantage by running candidates in competitive wards last Town Meeting Day, but all six Progs held onto their seats.

Progressives Hold Their Ground in Burlington City Council Elections
By Courtney Lamdin
Off Message
Hanson, who was first elected in 2019 and won reelection in 2021, has been one of the council's fiercest climate activists. He championed the city's rental weatherization ordinance, which requires all Burlington apartments to meet certain energy efficiency requirements, and has applauded the city's goal to become net-zero by 2030. He's also a big proponent of ranked-choice voting, which will be used in council elections this March.


He's currently the executive director of Run On Climate, a nonprofit he cofounded that offers free climate action trainings and supports political candidates who have climate-centered platforms.

If hired by the Burlington Electric Department, Hanson would be responsible for managing net-zero projects in the city, researching carbon reduction methods and engaging underrepresented residents in discussions about how to promote energy efficiency.

The position, which includes membership in the International Brotherhood of Electrical Workers, offers generous benefits and a pay range of about $63,000 to $103,000 annually.

The council may have approved the position, but Hanson says he didn't support it just so he could apply for the job later on. He said he decided to apply after considering how being a councilor didn't allow him to focus on his true passion: climate policy.

"Even if you have a certain issue that you really want to focus on, you're gonna end up spending tons of time addressing so many different issues in the community," Hanson said of being on the council. "I've kind of thought for a while now: Is there a better way for me to be the change I want to see in the world and do this work?"

The city charter requires Mayor Miro Weinberger to call a special election within 90 days. It's unclear whether the mayor will attempt to run the election on November 8, the state general election.

It would be a quick turn: The city must begin mailing out ballots by September 26, leaving political parties practically no time to hold nominating caucuses beforehand. A spokesperson for Weinberger didn't immediately respond to a question about the election timeline.

Hanson thanked the people who supported him on the council, calling the experience "incredible and humbling."

"I'm proud of the work I did," he said. "It's obviously bittersweet leaving that role, but I feel confident that this is the right move for me."

Clarification, September 16, 2022: The council approved the creation of the position Hanson plans to apply for, but it did not create the position itself.