Burlington Council Wants to Save Memorial Auditorium — But Next Steps Unclear

At its meeting on Monday, the Burlington City Council advanced two projects that received voter support on Town Meeting Day: A $25.9 million makeover of Main Street and a possible fix-up of Memorial Auditorium, which closed in 2016 due to structural deficiencies.


In March, voters approved spending $23.8 million to address various capital projects, with $1 million earmarked for Memorial. City officials asked councilors on Monday whether the city should spend the funds to stabilize the historic building or tear it down — and the body agreed it should be saved.

Officials from the city's Community & Economic Development Office estimate that the repairs needed to keep the building standing would use about $700,000 of the voter-approved funds. Demolishing the structure would have cost $3.35 million, according to the city's most recent estimates. Councilors will vote on a contract for the stabilization work later this summer.

Mayor Miro Weinberger said the council made the right decision.

"This administration has never supported the demolition of Memorial," he said. "Having the updated demolition figures I think does clarify what our option is at this point: stabilization or spending millions more to have an empty site."

Related The History and Uncertain Future of Burlington’s Memorial Auditorium

The History and Uncertain Future of Burlington’s Memorial Auditorium
By Chris Farnsworth
History
What's still unclear is what will happen next. Weinberger said that with an impending $181.3 million bond this November for a new high school, the city won't have the borrowing capacity to make significant improvements to Memorial. CEDO staff suggested the city could consider a public-private partnership to develop just Memorial or even the entire "gateway block" — the plot at the corner of Main Street and South Winooski Avenue that the city has sought to redevelop for years.

The council had mixed responses to how the city should proceed. Councilors Joan Shannon (D-South District) and Gene Bergman (P-Ward 2) said the city should review a robust community survey from 2018 for direction on how to reuse the site.

Survey Says: Burlingtonians Want to Renovate, Restore Memorial Auditorium
By Katie Jickling
Off Message
But Councilor Ali Dieng (I-Ward 7) said the city has changed since then. He suggested going back to the drawing board. Dieng also cautioned the city against spending large sums on the building, noting that voters turned down a proposed tax increase on the March ballot.

"People have spoken so many times," he said. "Maybe we have to listen here."

Councilor Zoraya Hightower (P-Ward 1) agreed that the city should learn more about the school's plans before committing to any redevelopment but said to be a "truly public resource," Memorial needs an investment of taxpayer dollars.

"To truly be a public-private partnership where we have enough stake to be able to negotiate on what we want, I think we are gonna have to put up some money," she said.

Councilors were more agreeable when it came to the Main Street proposal. They unanimously approved the project design with one condition: that it include separated bike lanes along the entire route.

The project is part of the city's "Great Streets" program that aims to create friendlier roadways for walkers and cyclists by building wider sidewalks, tree belts and pedestrian amenities such as benches and swings. Six blocks of Main Street, from South Union to Battery, will get such a makeover.

Burlington Seeks a Makeover for Main Street With TIF Bond
By Courtney Lamdin
Off Message
But while the city's original concepts called for dedicated bikes lanes, officials later proposed a shared use pathway on a narrower section of the project route. City planners said Monday, however, that they incorporated the bike lane after hearing concerns from the community.

They've also heard from business owners worried about losing parking spots when they're converted from diagonal to parallel, and vowed to perform a parking study — including an inventory of spaces — over the next year.

Earlier in the meeting, the council's second go-around at redistricting ended with little consensus on how to redraw the city's voting districts.

Even after an hour-long work session on the matter, the answers to several key questions still eluded councilors: How many wards should the city have? How should the New North End be divided? And how to distribute the city's college student population?

Burlington’s Redistricting Process Has Barely Begun, but Conflict Is Already Brewing
By Courtney Lamdin
City
Triggered every 10 years by new U.S. Census Bureau data, redistricting ensures that each voting district has roughly equal populations — and in Burlington, they don't.

Since 2015, the city has been divided into eight wards and four districts — North, South, East and Central — for a total of 12 councilors. Each district is composed of two wards, so residents have two elected officials: a councilor from their ward and another that represents their geographical district.

But because some areas of the city have grown faster than others, the present-day boundaries don't pass constitutional muster. Councilors must decide on a new map this summer where the population of each district is no more than 10 percent larger or smaller than another. Voters would consider the configuration on the November ballot, and the new maps would take effect in 2024.

The two eight-ward maps Stetson created did achieve this, but resulted in two small New North End wards that limit "the possibilities for ward configurations in other parts of the city," according to her memo to councilors.

The University of Vermont campus presented other complications. Stetson said that like the 2010 Census, the 2020 version didn't accurately represent the true number of students in certain areas of the city. One block reportedly has more students than the known number of beds, whereas other blocks has far fewer students than the city would expect, Stetson said, adding that the city has since received data that will help update the maps.

The data is key to achieving another of the council's objectives: splitting up the college population into more than one ward. The present-day Ward 8 — an area that includes student-heavy neighborhoods downtown, the University of Vermont's residential campus and University Heights — is nearly all college students, which has generated complaints from long-term residents who say that students have outsize influence in city elections.

Two of Stetson's maps — the seven-ward plan and one of the two eight-ward configurations — seemingly solve the problem by moving a larger chunk of campus into Ward 6. But the two others were problematic: The other eight-ward drawing was essentially the status quo — and was panned by councilors — and the 12-ward map shows that one of those wards would also be a majority students.

Related Control of the Burlington City Council Likely Hinges on One Race: Ward 8

Control of the Burlington City Council Likely Hinges on One Race: Ward 8
By Courtney Lamdin
Politics
Meantime, an independent mapping group of Burlington residents is pushing its own configurations, both of which have eight wards. The group's proposals would split up the student population by grouping census blocks of students with others of long-term residents, including some in the present-day Ward 1. Its plans also carve out a ward for the downtown, a decision that's reflected in some of Stetson's maps. 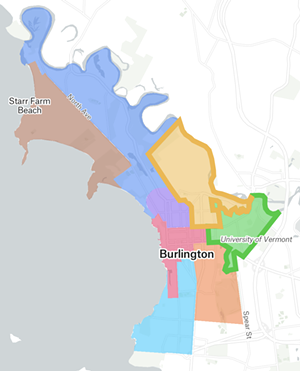 Councilors Hightower and Ben Traverse (D-Ward 5) both preferred the seven-ward map to the 12-ward one because it would allow residents to retain some sense of "ward identity." Traverse said Ward 5 residents may be loathe to "go too far from the structure that we have right now." But Councilor Joe Magee (P-Ward 3) said he likes the 12-ward option because it creates the downtown ward that the mapping group is seeking, and preserves the Old North End.

Councilor Shannon suggested the city work with the mapping group, or at least invite them to present their concepts at a future council meeting — a request Council President Karen Paul (D-Ward 6) took to heart. The council will host a community forum in early June, with the goal of voting on a new concept by July 18.

"I appreciate how difficult it is to make the numbers work," Shannon said. "We're all going to have to make some compromises on the various things that we want."

Later in the meeting, councilors voted to hold off on a proposal meant to prevent short-term rentals from being permitted under regulations for traditional bed and breakfasts.

The city has permitted short-term rentals — leased on sites such as Airbnb and Vrbo — under bed and breakfast rules for years. But a recent effort to limit short-term rentals to a host's permanent residence has influenced people to seek approval under the more permissive regulations for B&Bs. The permit applications have "come in ... at a rapid rate," the council's resolution says.

Weinberger Vetoes Burlington's Short-Term Rental Regulations
By Courtney Lamdin
Off Message
The resolution asked city permitting staff to "enforce current law regarding all lodging unit uses, using all the means at its disposal" with the hope of preventing any unpermitted short-term rentals from accepting reservations beyond December 31 of this year.

But some councilors found the language confusing, and questioned whether the plan would really achieve its stated goal — particularly when a council committee is due to report back on a new set of regulations in early June.

The body voted 8-4 to table the issue. Councilors Bergman and Shannon, the resolution's cosponsors, voted no, along with Councilors Ali House (P-Ward 8) and Perri Freeman (P-Central District).