When it opened in 1964, Burlington High School was hailed as a state-of-the-art edifice. Fifty-four years later, the prevailing view has changed, and not just because of the school's foggy Plexiglas windows. Its mazelike design of six buildings connected by enclosed ramps — no doubt considered cool half a century ago — makes it difficult to navigate, especially for anyone with a disability.

Burlington superintendents, parents and school board members have been talking for decades about fixing the facility. Now there's a proposal to do so. Come November, Burlington residents could be voting on whether to borrow $70 million to build a three-story addition on the city's only high school.

The district is expected to provide more detailed information about the project and its finances — including how taxpayers would be affected — in the coming weeks.

But the decision-making process is imminent. The Burlington School Board is scheduled to vote on the bond on August 14. If a majority of board members approves, the Burlington City Council will weigh in. Although they have no control over school matters, the 12 councilors get to decide whether the high school question goes on the ballot. Supporters of the proposal want them to vote on August 27.

"It seems like a rush job," said Burlington City Council President Kurt Wright (R-Ward 4), who, along with former council president Jane Knodell (P-Central District), met with school leaders and Mayor Miro Weinberger in mid-July to call for more time to study the proposal and engage the public. Wright says he told superintendent of schools Yaw Obeng and school board chair Clare Wool to slow down.

"I thought that message really went through," Wright said. "But now I'm not sure it did."

The mayor is also noncommittal. He agrees that the high school needs substantial renovations but said he has yet to see the financial details. "If we were being asked to put something on the ballot today, we couldn't do it responsibly," Weinberger said Monday.

The mayor also noted that he's not sure a late-August vote by the council is feasible: "I am concerned that there's a lot that needs to be done in a short period of time."

Superintendent Obeng did not return calls for comment, nor did board chair Wool.

If either the school board or the city council balk at the proposal this month, there won't be much time left to get it on the ballot for the November 6 election. Ballots must be printed by September 21, according to Assistant City Clerk Amy Bovee.

Those calling for improvements at the high school are tired of waiting. Limited handicap access is a continuing challenge. For people who use wheelchairs, the best way to get from the lobby to the auditorium is through an exterior side door.

A district-produced flyer promoting a streamlined building spotlights Seamus Stein, a Burlington High School senior who uses crutches. To get from band class to physics, his quote reads, requires "three elevators, an outside path, and building connectors."

Spaulding is uniquely qualified to point out the facility's physical failings; he broke his leg in May. On a tour last week, he navigated the buildings on a knee walker — a scooter that he kneels one leg on and rolls along.

As he pushed himself up a sloped connector between two buildings, Spaulding perspired. "The ramps, most of them, are too steep to meet ADA compliance," he said, referring to the Americans with Disabilities Act.

Another problem: The 240,000- square-foot high school has only four elevators, and the complex would need seven to make its current configuration work better, according to Spaulding.

Some buildings have elevators, others don't, and stairs from one floor to another can be an obstacle for some. In Building C, for example, students who can't use the stairs from the first floor to the second face a long, winding route, which requires that they go through other buildings and take a stair lift, then connect back to Building C. Getting to class takes 15 minutes for some of them.

"Wow!" was her first impression. "I thought it was lovely. How nice to have everything new and clean,'' recalled the retired educator.

But the separate buildings made it hard for students to interact, Jenks said. The trades and business classrooms were far from the classrooms for college-bound students, she remembered. "The actual physical structure of the building was very exclusionary," she said. "It did not encourage a community of classmates."

The proposed renovation would change that design flaw while improving accessibility. Sketches show that some of the outlying buildings would be demolished. The three-story addition would wrap around the main building that currently houses the gym, auditorium, cafeteria and administrative offices. Its classrooms would have partitions and other flexible learning features. 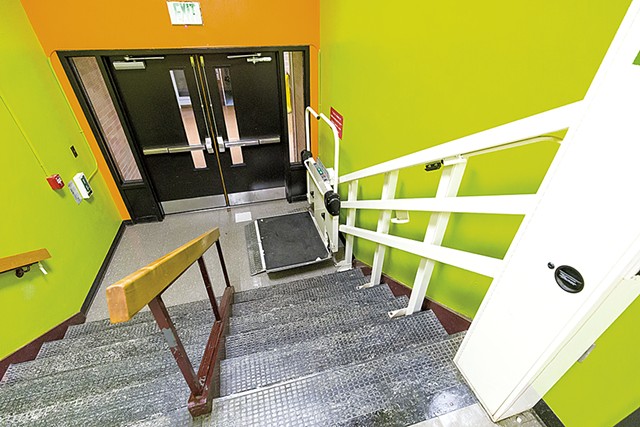 A final plan wouldn't be inked until after voters approved the bond.

How likely is that to happen? It depends on whom you ask.

City Councilor Dave Hartnett (D-North District) said the citizen-led Burlington High School ReEnvisioning Committee, which has provided input about the school, is doing an "amazing job" and that he needs no convincing that the high school is in "dire" need of improvements. He supports the $70 million proposal — in theory.

Ralph Lewis, 59, who graduated from Burlington High School and has lived in the Queen City since the early 1960s, isn't so sure. To escape the city's mounting property taxes, the New North End homeowner and his wife are planning to move to South Carolina or Tennessee. Last month, rates on residential property increased 4 percent; commercial property, 6 percent. The annual tax bill on a Burlington home appraised at $250,000 is now $6,711.

"We've kind of given up," said Lewis, who works in information technology. Voting against school budgets isn't enough, he said. Even after they've been rejected, he's noticed the same pricey proposals often come back and get approved.

Lewis agrees that the high school needs renovations but wonders if there is a more economical way to do it. It's sobering to contemplate adding $70 million to the roughly $50 million Burlington has already spent or authorized for improvements at other schools, he said: "It's a huge burden. I'm all for education. I just don't understand why ours is costing so much more than other places in the country per pupil."

Vermont per-pupil spending was $19,399 in 2017, the sixth highest in the nation, according to a National Education Association ranking.

It's true that upkeep of Burlington's 10 school buildings — six grade schools, two middle schools, the high school and an early-education/administrative building — is expensive. Over the years, various proposals have emerged for consolidating them. In 2002, then-superintendent Lyman Amsden put forth one of the boldest, a plan to shrink the real estate portfolio to five schools and use the savings to build a new high school. The plan also envisioned merging grade schools to achieve more economic diversity.

The sale of school buildings was expected to generate $10 million; savings on maintenance and administration, $2 million per year. The price tag for a new high school was $30 million — a bargain by today's standards.

But many parents protested, saying they cherished the smaller elementary schools within walking distance of home. "I would say, politically, the whole idea bombed terribly,'' recalled Michael Green, who then served on the Burlington School Board.

Voters at that time repeatedly rejected school budgets, and it was a battle to get one passed, he recalled.

That changed in the early 2000s as voters adjusted to a new finance system created by the 1997 law known as Act 60. The state-funded education formula provides income-based tax breaks, which has made it easier to pass school budgets. Not surprisingly, consolidation hasn't gained any traction. Another proposal for it was defeated in 2005.

Burlington residents are still willing to say no. Earlier this year, they pushed back when Obeng and some school board members sought to build two new preschool buildings. Residents said the plans caught them by surprise, and a school board with many newly elected members nixed the idea.

The city council may do the same with the high school because there's so much competition right now for tax dollars, Hartnett predicted. The Weinberger administration is gathering public input for a major renovation to Memorial Auditorium that could wind up on the ballot in November. The mayor is also researching a springtime bond to fix the city's wastewater issues.

"Is their proposal ready for prime time? Do they have all their t's crossed and their i's dotted, and can they get out there and sell it to the voters?" he asked rhetorically.

School board member Mark Barlow has a simple pitch: "Much of the work is overdue, particularly around accessibility and deferred maintenance," he said.

His colleague, Kathy Olwell, is more cautious. She wants additional information about the tax implications before she makes up her mind. While she's "fully behind ... doing something" to the building "so that it is accessible to all of our children," Olwell said, "I guess I just really do want to know what that means down the road."