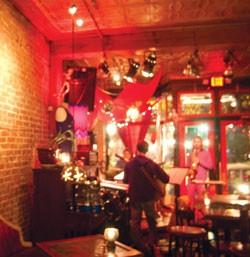 To some local restaurant owners, Burlington sometimes feels more like Bomont, the fictitious Midwestern town in the 1984 film Footloose, where an ultraconservative city council banned all rock music and dancing.

For years, many Burlington restaurant owners quietly grumbled that the city council wouldn’t allow them to offer live music or dancing, or impose a cover charge on their patrons, unless they obtained a cabaret license from the state or a special-events permit from the city. The latter are typically issued on an event-by-event basis.

Other restaurateurs claimed that, in years past, they’ve been told by councilors that the city has a cap on the number of “cabarets” — that is, bars and nightclubs that make most of their money from the sale of alcohol and live entertainment — it will tolerate.

Last week, a group of bar and restaurant owners discovered that none of those “rules” exists, in either city ordinance or state statute.

“It’s really unfortunate for them, and really embarrassing for me that that’s the assumption I was operating under,” said City Councilor Max Tracy. The Ward 2 Progressive is one of three city councilors — along with Ward 6’s Norm Blais and Ward 7’s Tom Ayres — who serve on the council’s license committee, which oversees how state liquor laws and regulations are enforced locally. “That’s what I’d always been told when I got on this committee.”

Last week, the license committee held the second of two public hearings aimed at clearing up “some really significant urban legends in Burlington,” as Tracy put it. Earlier this year, the legislature effectively eliminated any legal distinction between restaurant and cabaret licenses. That law, which took effect July 1, created one first-class liquor license for all restaurants, bars, nightclubs and hotels.

According to Tracy, the liquor committee first took up this issue last month at the request of several Burlington restaurants, including the Skinny Pancake, Pacific Rim, Radio Bean and Das Bierhaus. Tracy said that all have expressed interest in regularly offering live music and dancing, and charging a cover for it, but want to do so without having to get a special-events permit.

Benjy Adler, co-owner of the Skinny Pancake, said he’s been told several times since he and his brother opened their waterfront restaurant in 2007 that the liquor license didn’t allow them to charge a cover or permit dancing. Adler said he’s been asking to see that rule in writing for years but never got a good answer. As a result, he said, the Skinny Pancake simply refrained from booking certain pricier musical acts, because “suggested donations” wouldn’t come close to covering the cost.

“We’re a town that loves music and identifies with music and is identified as a musical destination,” Adler added. “We need to support our musicians, but I cannot make up the money in the margins on food and beverage. We need to be able to charge a cover.”

As Adler pointed out, the city’s policy about dancing was also “incredibly vague” from the get-go.

“When does ‘dancing’ start? When one person is tapping their foot in a corner? Is it a dance hall bump-and-grind session? It’s this slippery slope for places like us,” he said. “We don’t want to be out of compliance, but we also don’t want to have to go up to two or three people in the corner who feel the spirit move them and say, ‘Hey! You have to stop tapping your foot!’”

But now that the state will treat all first-class license holders the same way — there are currently 88 first-class liquor licenses citywide, according to Vermont Department of Liquor Control records — Blais said he’s open to discussions about how the council can help restaurants “make a profit, and at the same time make sure the public is protected.”

Police resources are limited on weekend nights, Blais noted. Six officers might be covering the entire city on a Friday or Saturday night.

Needless to say, some longtime bar owners are less than thrilled with the idea of allowing restaurants to crank up the music and start charging an entrance fee once their kitchens close for the evening.

“Hey, I’m all about everybody making some money,” said Martti Matheson, who owns Red Square on Church Street. “But then what happens is, they just don’t know how to do the crowd control.”

As Matheson pointed out, for years Burlington’s cabarets have been required to offer enhanced security and crowd-control training for their staff, and to keep additional personnel on hand during busy weekend nights. Even if downtown restaurants hire bouncers and offer their employees that “enhanced training” currently required for bars and nightclubs, Matheson feared that the end result would be bad PR, and bad public policy, for all license holders.

Tracy suggested that some bar and nightclub owners may be more interested in protecting their profits than the public.

“When we have a vibrant downtown as a whole, everybody benefits. I don’t like this engagement of just trying to protect your own,” Tracy said. “Anything that gets in the way of musicians and artists making a living in the city, aside from legitimate safety, needs to be reexamined.”

Blais said his committee has yet to hear from the city attorney on this issue or formulate a position, noting, “We’re still in the fact-finding mode.”

The committee will discover the new liquor-licensing law doesn’t require restaurant owners to increase their staffing, employee training or insurance coverage, according to Bill Goggins, director of the Vermont Department of Liquor Control. But local municipalities such as Burlington retain the right to impose their own conditions on individual licensees, including their hours of operation, restrictions on outdoor seating, extra training for employees and minimum staffing requirements. Additionally, if there’s going to be dancing and live music, the fire marshal can impose his or her own conditions on capacity, number of tables and their configuration.

Blais said he expects his committee to make an official recommendation to the full council by the end of the year, with the goal of having something in place by April, when all the eating and drinking establishments in the city go through the licensing process — just in time for Spring Fling.