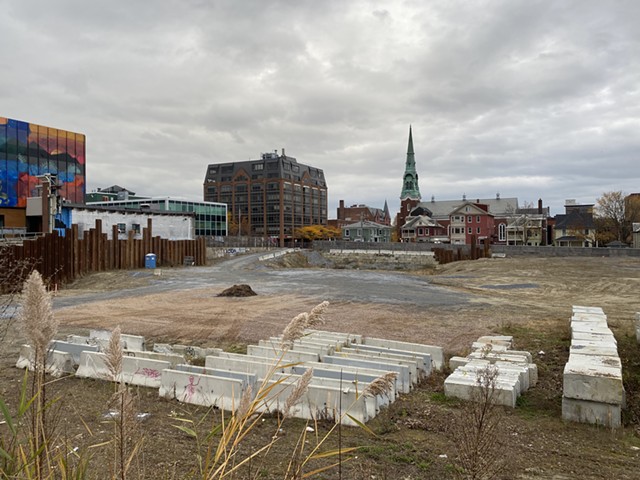 At a special meeting on Tuesday, the Burlington City Council unanimously approved an amended development agreement for CityPlace Burlington, which should allow construction on the long-stalled project to begin this month.

“We've been working towards this moment for a long time," said David Farrington, one of the project partners.

For years, the future of “the pit,” as locals have nicknamed it, has been uncertain. In 2014, former owner Don Sinex pitched redeveloping the Burlington Town Center mall into 14-story towers. Sinex tore down the mall in 2017, but the site has been empty, with little movement since.

The project is now helmed by three local businessmen: Farrington of Farrington Construction, Al Senecal of Omega Electric Construction and Scott Ireland of S.D. Ireland. Their plans for the site include market-rate apartments, some affordable housing, ground level retail space, a rooftop restaurant and an observation deck.

In recent months, the trio has made notable progress. CityPlace Burlington announced in September a partnership with Champlain Housing Trust, which will construct affordable housing on the site. The developers have also resolved a number of longstanding lawsuits against the project.

To move forward with their ambitious construction timeline, though, the city had to approve changes to the agreement that was negotiated with Sinex, the prior owner, in early 2021. The previous agreement was based on a different financing timetable and did not account for the current partnership with Champlain Housing Trust.

The new agreement allows the CityPlace partners to begin construction in November, even though they have yet to secure funding for the entire project, which will be built in phases. The amendment also acknowledges Champlain Housing Trust’s involvement and accommodates the legislature’s statewide extension of the tax-increment financing bond deadline, which is now spring 2023.

In 2016, voters approved using $21.8 million in TIF dollars to reconnect Pine and St. Paul streets, which were severed when the mall was built in the 1960s.  The new agreement will allow the city to carry out some public improvement projects around those new streets if it can obtain grant funding for the work.

With the new agreement passed, the developers are expected to start construction soon. They've already applied for a building permit to lay the foundation for the structure, at an estimated cost of $12 million.

In a memo to the city, Mayor Miro Weinberger acknowledged the risks the city faces in signing on to the project but reinforced his confidence in the current partners.

The team behind CityPlace spoke at the meeting about the uncertainties ahead, warning that there could be future amendments to the agreement. The developers reiterated, though, that city taxpayers will be better off with the decision to move forward with construction.

"This is a clearly a major step towards our longstanding goals for our downtown," Weinberger said.