Burlington Church Will Host a Benefit Dinner for Myanmar 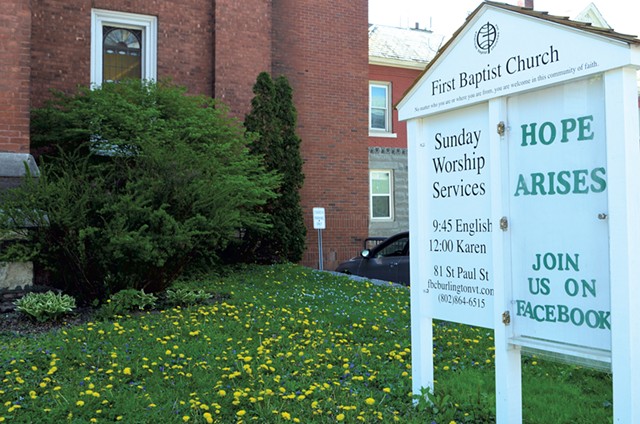 A Burlington church with New American members from Myanmar, aka Burma, is holding a benefit takeout dinner to help those in the Southeast Asian country.

The nation has been in turmoil since a military coup overthrew the democratic government of Aung San Suu Kyi earlier this year. Hundreds of protesting civilians have been killed during the crackdown.

Some of those impacted have been members of an ethnic group known as the Karen people. Many of the 60 to 80 Burmese congregants at the First Baptist Church on St. Paul Street in Burlington are Karen and have family and friends still in the country, according to the church's pastor, Rev. Karen Mendes.

The Christian denomination's popularity in Burma is due in part to Massachusetts missionary Adoniram Judson, who preached there for decades after arriving in the country in 1812.

In Burlington, Burmese refugees started attending the First Baptist Church around 10 years ago. "Initially, it was one particular family [that] came for several years," said congregant Sarah Dopp. "And then all of a sudden, it started to blossom."

Pre-pandemic, some attended the regularly scheduled Sunday services. There was also a noon service in the Karen language, led by Pastor Thee Say.

"On the big days, like Easter Sunday or Thanksgiving Sunday or Christmas, we have one service that is in both English and Karen together," Mendes said.

They'll gather again on June 5 — socially distanced and in 15-minute intervals, at least — for a takeout dinner of Burmese noodles. Diners can donate however much they choose. Volunteers will cook and pay for the supplies.

Pastor Thee Say and the Burmese congregants will ultimately decide which organizations will receive the money, but "it's not going to stay in Vermont," Mendes said. "It's going to help folks in Burma."

The original print version of this article was headlined "Takeout Together"