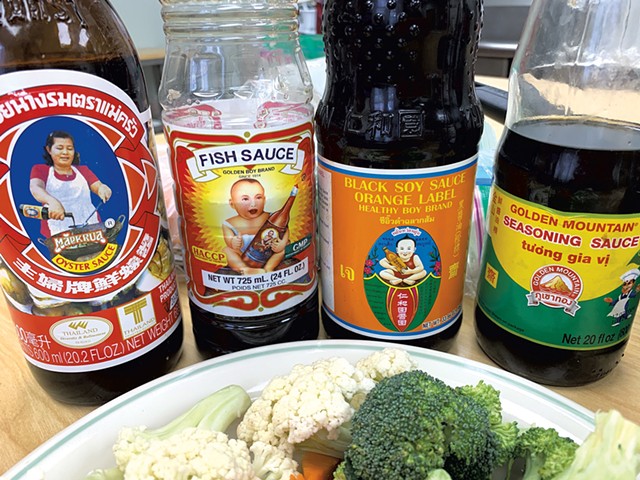 Last year, when the First Baptist Church on St. Paul Street in Burlington held a takeout meal fundraiser, the options were either Italian-style spaghetti or Burmese-style noodles. The latter were prepared mostly by cooks from the congregation's roughly 40 families with roots in Myanmar, the Southeast Asian country also called Burma.

Of the 120 meals ordered that year, few were for the spaghetti, said Sarah Dopp, a longtime congregant and event volunteer. The Burmese dish of noodles tossed with richly seasoned, stir-fried vegetables and optional chicken proved to be a hit.

For this year's June 11 benefit dinner, it's all Burmese noodles.

The to-go meals have no set price. Diners order ahead for a specific pickup time and pay by donation. All proceeds will help people in Myanmar who have endured decades of civil war. Since a February 2021 military coup overthrew the democratically elected government, the country has been in heightened turmoil.

The two cooks leading food preparation, Thalei Paw and Kee Lar, are sisters-in-law who live with their families in Winooski and work together in the kitchen of Tiny Thai Restaurant. The pair chatted with Seven Days in the church kitchen after services on Sunday.

Their children and husbands popped in and out of the conversation. Everyone wore brightly embroidered, traditional clothing, as they do for church every week.

The families are members of an ethnic group in Myanmar known as the Karen people, some of whom became Baptist due to American missionary efforts in the 1800s.

After Sunday morning worship in English, First Baptist holds a noon service in the Karen language. Several times a year, the services are combined, and the fundraiser engages church members of all backgrounds.

For friends and family members still in Myanmar, Paw said, "It's a really bad situation. They have to leave the village and their houses and stay in the forest. They are scared of the Burmese soldiers."

Last year, First Baptist's event raised more than $2,000. "We are happy to help each other," Paw said.

Paw and Lar will enlist family and other church members to prepare the food, especially to chop all of the vegetables, including cabbage, cauliflower, broccoli and carrots, they said.

The vegetables will be stir-fried just until crisp-tender with a paste of pounded garlic and ginger, plus black soy sauce, Thai fish sauce, oyster sauce and another soy-based seasoning sauce. A touch of sugar adds sweetness, and an egg is often scrambled into the mix. Meat, if included, is sliced thinly before it's cooked. Then everything is combined with the noodles and garnished with lime and optional cilantro.

When making the dish at home, the cooks said, they include chile peppers; for the fundraiser meal, they skip the heat.