In early 2020, Burlington composer Don Jamison was looking forward to hearing the Burlington Choral Society perform There Is a Day, his first commissioned piece for the group. The chorus had been rehearsing the work, which sets to music seven poems by Kentucky farmer-writer Wendell Berry. Then much of the world shut down.

Now there finally is a day for Jamison's premiere: On Saturday, November 20, the choral society will perform the work, in a concert by the same name, along with a cantata by Johann Sebastian Bach and two pieces by Minneapolis composer Jake Runestad. The concert is the group's first live performance since the pandemic started.

"Don does not want to pretend that life is all happy-go-lucky stuff." Dick Riley tweet this

The 60-person chorus has shrunk for this performance to 40 voices, as some members aren't comfortable singing in a group during an upsurge of COVID-19 cases, and all will wear masks. Artistic director Dick Riley will conduct, and an 11-piece string orchestra will accompany the chorus. Guest soloists are soprano Sarah Cullins and tenor Adam Hall, both of Burlington, and bass Erik Kroncke of Montpelier.

The context for Jamison's music has changed, but the current moment lends it new meaning. When the piece was originally to be performed, his settings of Berry's meditations on nature were intended as a respite from the political noise around president Donald Trump and the 2020 election. Today, the music may resonate with the audience's pandemic-enhanced appreciation of nature and questioning of the way forward — out of COVID-19, climate change and any number of other crises.

Jamison chose the poems from among Berry's 300-plus "Sabbath" poems, a secular moniker the poet applies to the day of rest after the workweek. Berry's works — novels, essays, poems and political protests — have made him a legend among writers and environmental activists. At 87, he continues to write "Sabbath" poems; Jamison selected and sequenced poems published between 1987 and 2001.

As performed, the songs will move from a disturbing vision of a busy road as a "river of burning oil" to the woods and the "silence" of birdsong. The work's apex, the title poem, captures a moment of peaceful revelation. It reads, in its entirety, "There is a day / when the road neither / comes nor goes, and the way / is not a way but a place."

Jamison was attracted to the musicality and internal rhythms of Berry's poems, which are in the Romantic tradition of William Wordsworth and Samuel Taylor Coleridge, the composer said during a phone call. But he and Berry share a broader span of interests, too. Jamison is an activist in his own way. His day job is program director at the Vermont Employee Ownership Center, the Burlington-based nonprofit he cofounded.

Additionally, Berry's poetic search for a quiet place in nature reflects Jamison's own inclinations as a Vermonter, he said. "He allows for finding [quiet places] in church or meditation, but most of us in Vermont do find it out of doors," Jamison noted — even more urgently since the pandemic turn to digital interaction, he added. 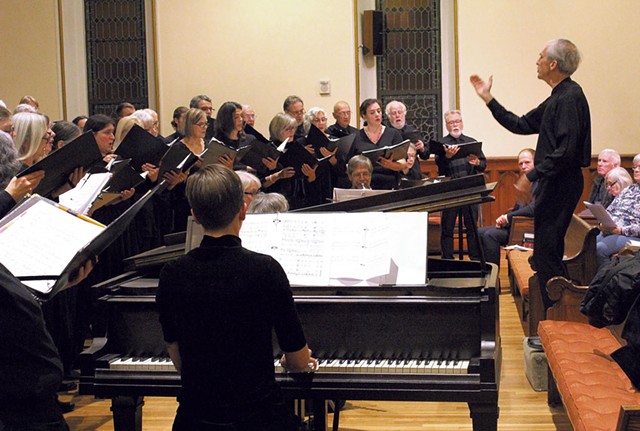 The performance comes at a poignant time for Jamison. When he talked with Seven Days, he had just learned that Village Harmony founder Larry Gordon was dying after a bicycle crash. Based in Marshfield, Village Harmony teaches community singing traditions at traveling music camps. It was Gordon who introduced Jamison to vocal composing by commissioning a piece for Village Harmony in 1989. That was the first of Jamison's many compositions for the group.

Jamison has also composed vocal works for the Onion River Chorus in East Montpelier, Counterpoint in Montpelier and Social Band in Hinesburg — a chorus he cofounded and sings in as a baritone — as well as works for the Vermont Symphony Orchestra and the Vermont Contemporary Music Ensemble.

In There Is a Day, whose music Riley described as "seemingly simple," Jamison uses modes well beyond major and minor to convey nuances in mood. His settings progress in coloration from a dark Phrygian mode, which uses many minor intervals, to a "very up" Lydian mode filled with sharps in the final song, the composer said.

That trajectory helped Riley create the concert's program, the conductor said during a phone call.

"Don does not want to pretend that life is all happy-go-lucky stuff," Riley said. "He's attracted to Berry's poems because Berry ... is not going to gloss over conflict." But the poem Jamison chose to end the sequence, "I Climb Up Through the Thicket," refers promisingly to "the whole air vibrant with" birdsong.

"That's Don taking the depth and darkness of our world today and giving us a sense that there's still a vibrancy that's accessible" in the world, Riley said — even if it may only be reached via "the shadow of the mercy of light," as one of Berry's most haunting lines reads.

Riley decided to repeat the song about light at the finale, he said, to end the program with "light and love."

"I thought that we have enough of a force of darkness that we've all experienced," he continued, adding that a year devoid of choral singing was personally devastating. "We need a little counterforce of love to project energy in the most productive ways. That's a preposterously high goal, but what can I say?"