Burlington Cat and His Mom Hit the Big Time 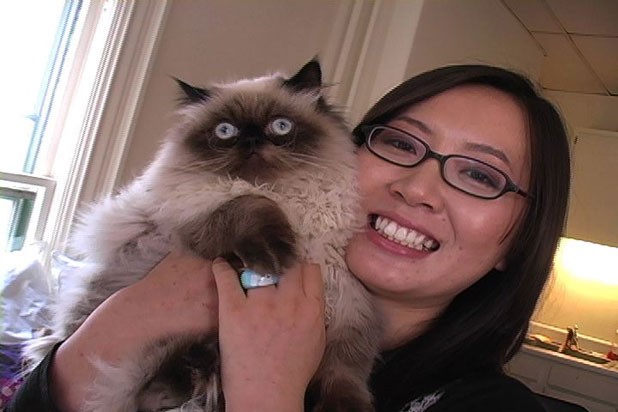 Sachie Tani needed a purebred. Her parents back in Kyoto reasoned that if her visa expired and she needed to return to Japan, it would be easier to find a home for a cat with a pedigree. A lifelong animal activist, Burlington-based Tani put aside her original wish for a shelter cat and contacted Vermont’s Cozycreek Cattery, a breeder of Ragdolls and Himalayans. Presented with a litter of kittens, Tani fell in love with the runt. “He ugliest in the bunch,” she says with a giggle. “A little ugly duckling.” Tani describes their meeting much as adoptive parents of human children do — as an immediate love match. “Now, if I have to go to Japan, I could not leave him. He is my baby,” she says.

It wouldn’t just be her fuzzy friend Tani would be missing, though. Since his birth less than two years ago, Goma (Japanese for sesame) has spawned a mini-empire. It all began with Tani’s blog, My Himalayan Cat, Goma, a daily dose of the pet’s adventures in her studio apartment, where he’s seen enjoying new toys, snacks and perching places.

Goma’s YouTube channel has more than 100 subscribers and has attracted hundreds of thousands of hits. One video entitled “Cat vs. Cotton Candy,” featuring a battle between blue-eyed Goma and a plastic bag filled with what looks like cotton, has been viewed more than 90,000 times this year. Tani, a graphic designer at Jager di Paola Kemp Design, has introduced Goma to the world at large with impressionist images on Burton snowboards and children’s wear, and a true-to-life cartoon of the kitty on a Flip Mino camera.

But there are no 15 minutes of fame quite like those enjoyed on television. On December 13 at 8 p.m., Tani and Goma will make their national small-screen debut on the season finale of Animal Planet’s “Cats 101.” Folks at the cable network became aware of Goma via his Facebook fan club. The program focuses on individual cat breeds, including their histories, unique attributes and quirks.

Though not a show-standard Himalayan, Goma has personality to spare. As Tani puts it, “Goma was selected for Goma.” Of course, her devotion to her cat, and creative expression thereof, didn’t hurt their cause. (On her blog profile, Tani declares, “Imagine your typical cat lady and multiply her to 100.”)

Tani reports the TV crew spent 12 hours watching her at work, at home and in between. “He bike rides!” she exclaims, showing the net backpack in which Goma rides down to the waterfront, as he did for the show.

Who knows where Goma — already a local celebrity — may pop up after his Animal Planet experience? Perhaps a “Bachelor”-style spinoff? Whatever heights the kitty may reach, for now he’s keeping a level head. As Goma naps on his ultramodern Hepper Home bed — designed by Burlingtonian Jed Crystal — Tani looks over at him fondly. There’s no secret to his success, she demurs. “He’s just being Goma.” Or maybe that is the secret.

VIDEO: See Goma in action in this archival episode of Eva Sollberger's "Stuck in Vermont." Eva interviewed Sachie and Goma in November of 2007. Click here to watch the video.