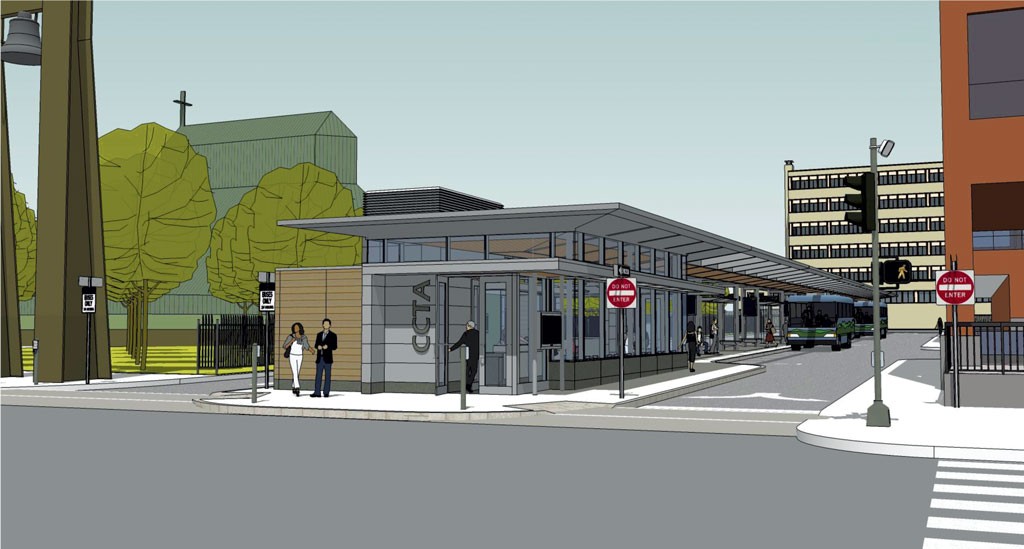 Designed landscapes of architecture's modern era — the half-century that ended in the late 1970s — are often neglected, demolished or developed beyond recognition. That hasn't boded well for the works of the 20th century's most influential landscape architect, Dan Kiley, a longtime Vermonter whose office was located in Charlotte for most of his career. In fact, the worldwide threat to Kiley's works prompted the Washington, D.C., nonprofit advocacy group the Cultural Landscape Foundation (TCLF) to dedicate to him its 2013 "Landslide" — an annual compendium of threatened or at-risk landscapes.

Yet the fate of Kiley's only surviving completed landscape in Vermont now looks surprisingly sunny. In 1977, he designed the diagonally oriented grid of honey locust trees that surrounds three sides of modernist architect Edward Larrabee Barnes' Cathedral of the Immaculate Conception in downtown Burlington. The small park was previously threatened both by neglect — the church lacked funds to keep it up — and by the choice of an adjacent street, St. Paul, for the site of Burlington's new bus hub.

Now, thanks to an agreement between the preservation community and the Chittenden County Transportation Authority, the grove will gain $60,000 worth of an arborist's attention during construction of the hub, which begins in May, according to CCTA project manager Steve Carlson. Crucially, pedestrian views of the park on the approach from Church Street will be preserved. By July 2016, riders will be able to wait for buses in an air-conditioned or heated, glass-enclosed room — and still enjoy the grove next door.

Admittedly, the Burlington church park does not have the same visual impact as, say, Kiley's formal design for L'Esplanade du Général de Gaulle in Paris (1978), or the pure experiential pleasure of his oasis-like South Garden at the Art Institute of Chicago, which remains a healthy version of its 1962 original installation. Both those landscapes feature prominently in a traveling exhibit about surviving Kiley masterpieces that TCLF created in tandem with its Landslide designation. The exhibit includes Kiley's Charlotte office grounds but does not mention the Burlington site.

The original design of the bus hub, Trieschmann comments, would have been "overwhelming." Developed between 2011 and 2012, that design posited a two-story structure with a 360-foot-long, 70-foot-wide arched glass roof that would have covered and enclosed the entire side of the street adjacent to the church property.

"It was quite ambitious," recalls principal architect Richard Deane of TruexCullins, who designed both the original and revised plans with help from project manager Ben Allred and technical director Peter Burns, and early input from project architect Cam Featherstonhaugh.

The design team intended the glass roof and glass wall panels supporting it to conserve views of the park. But those panels were to be mounted on a low concrete wall that ran the length of the street. That feature, says Trieschmann, "created a physical disconnect with the church property. And the park was never meant to be seen from an enclosure," she adds.

The new design moves the second story below grade and trades the enormous roof for a more modest one that merely spans the width of the in-street island and attached waiting room. In place of the low concrete wall, a black iron fence will separate the park from the hub, and a diagonal concrete walkway that exits on St. Paul Street will be dug up. The last two changes are required for safety reasons, to prevent pedestrians from cutting across the hub.

One loss on the preservation side hasn't changed from the old design to the new. What remains of the row of trees along St. Paul Street, which were unfortunately planted in the city right-of-way, will be removed.

Amazingly, the final design appears to make everyone happy — including Kiley's associate, Peter Ker Walker, who was principal-in-charge on the cathedral site. (Kiley's firm was known for a time as Kiley Tyndall Walker and then, from around 1980, as Kiley Walker, until Walker left in 1986. Kiley died in 2004.)

"To my mind, the transit authority is doing good things," says Walker, 78, from the office in Charlotte where he still works.

Walker is advising CCTA on rehabilitating the trees. The agreement spells out nine preservation-minded measures that include deadwood and structural pruning, root and soil aeration, resistograph testing for interior fungal growth, and planting of five new trees. Walker has helped select an arborist and has advised CCTA to scaffold and burlap the row of trees closest to the hub during construction.

He notes that the trees haven't been tended since they were planted. "They were, I would say, in shock," Walker recalls thinking after viewing them with CCTA officials. Not only were locusts lost along St. Paul Street, but the row closest to the cathedral was missing; the church had removed it to discourage kids from climbing on the church roof.

"But, by and large," says Walker, "the grove is still there, and can be tended, and the removals really haven't upset the formality of the plantings. We are safeguarding what we have."

Architect Deane says of the new hub design, "We're happier where we've come down. It's less complicated and more appropriately scaled." And, though excavating is expensive, the final tab will be closer to budget than were the projected costs for the two-story structure. The project will now cost $9.6 million, of which almost $8 million comes from federal sources, says CCTA's Carlson.

Trieschmann is happy, too. "We definitely like the one-story structure," she says, and adds that, overall, the structure is "very respectful of Kiley and the historic buildings in the area."

Carlson says the CCTA "bent over backward" to accommodate the preservation community. The transit authority lost a cherished feature in the process: a second-floor meeting room that "would have been a great resource," he says, not just for CCTA and its clientele but for other community groups. The below-grade level — which will contain a break room for the drivers with a kitchen, nap room and gendered bathrooms — was too small to include a meeting room.

Nevertheless, the consensus design may make the bus drivers, their customers and the public the biggest winners.

Drivers have had to deal with a tiny break-room-cum-single-bathroom since the old hub, inadequately sized for use by just four buses, opened along Cherry Street in 1981. A second break room down the street was displaced when L.L.Bean moved in last summer, forcing drivers to make their way to gendered bathrooms several flights up behind the clothing store.

"It's a nightmare," declares seven-year CCTA driver Jim Fouts, 55, of Fairfax. "There are the safety concerns about crossing Church Street, and the glassed waiting area is incredibly cold in the winter.

"The new design looks incredible," says Fouts, who volunteered the drivers' perspective on the design from the start of the project. "The public is going to be much better served."

Some of the public may notice a new sign — also provided by the agreement — that will note the historical importance of the small grove of trees and the building they were designed to complement. But Trieschmann thinks the bus hub itself may make the biggest difference.

"This new transit station will bring more people down in this area to look at and appreciate the Kiley landscape," she says.

The original print version of this article was headlined "Back to the Landscape: a Solution for Burlington Bus Hub"