Burlington Breakfast Destinations That Can Power Your Day 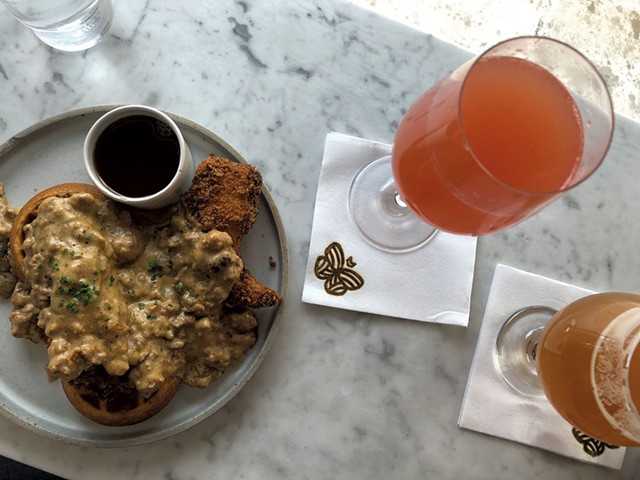 With the closing of Mirabelles Café on January 25 before its move to the burbs — where the staff will no longer serve cooked breakfast — Burlington loses one of its longtime morning meal favorites.

But not all is lost! Perhaps devotees of the Main Street institution need to be reminded about the other Queen City venues that offer breakfast. We rounded up the deets on eight of them within easy walking distance of Church Street — places where you can sit down for a hearty veggie-and-grain bowl, a protein-laden breakfast sandwich, or a popover fix.

Whether or not breakfast is the most important meal of the day, as our parents taught us, it will always be the first.

August First, a high-ceilinged space in a former garage, is just a short walk down the hill toward Lake Champlain. In mornings, it is suffused with light and the intoxicating scents of coffee drinks and just-from-the-oven breads and pastries. The breakfast menu, served until 11 a.m., includes an Instagrammable avocado-and-beet toast ($9), a New Year's-resolution-fulfilling grain bowl loaded with veggies and a soft egg ($10.50), rib-sticking scramble skillets (from $10), and hearty breakfast sandwiches (from $7). The sausage, egg and cheese sandwich, upgraded on the bakery's legendary maple biscuit, is a contender for the best in town.

Order at the counter and settle into a cozy corner to catch up with a friend, meet a colleague, or flip through a book or newspaper. But please keep it old-school, because laptops and tablets have been technology non grata at August First since 2014. And that's OK, because breakfast deserves more of your attention.

Any Way You Slice It

Since 1945, three generations of family members have manned the grill at Handy's Lunch. The horseshoe-shaped counter is always bustling, and the breakfast sandwiches come in sizes ranging from fairly large to absolutely absurd.

You can get a McHandy, consisting of an egg, cheese, an English muffin, and your choice of bacon, ham or sausage, for just $4.50. But why not add another egg and sub a roll for the muffin, also known as a Super G ($8.75)? Or try your McHandy served on French toast — this is called the SST ($8.75).

At that point, you might as well go all in with the great-granddaddy of breakfast sandwiches: the Chuck Norris ($16.75). It comprises four eggs, cheese, bacon, ham, sausage, a cheeseburger and a hunk of corned beef, stacked high and interlocked with five pieces of French toast. It's a dare, a Jenga tower of sandwich, a testament to humankind's courage — and maybe hubris.

Handy's may be a popular spot for nearby nine-to-fivers on a quick break, but for this sandwich, you might want to clear your schedule.

With glittering retro booths, vintage advertisements lining the walls and a soundtrack of early 2000s dorm-room hits — ahem, "Hey There Delilah" — the Burlington outpost of the Friendly Toast hits all kinds of nostalgia receptors.

The regional chain, started in Portsmouth, N.H., in the 1990s, is a family restaurant dressed up as a diner. It's a crowd-pleaser, and the menu contains an exhaustive list of variations on breakfast classics.

Customize pancakes (from $7) to your heart's content, including a gluten-free/vegan option. For eggs, choose from five types of Benedict (from $12.50), get them any way with a side of housemade Anadama toast ($8), or spice things up with breakfast lo mein ($14). The Doughnut Stop Believin' — sausage, egg and cheese on a French-toasted doughnut ($13) — is a solid breakfast sandwich and just the right amount of pun to wake up your brain. Cocktail flights simplify the whole ordering-before-coffee thing.

Weekends are busy, and the restaurant doesn't take reservations, but savvy diners join the wait list on Yelp to skip waiting out in the cold. The restaurant used to charge $2 extra for real Vermont maple syrup but has since assimilated to the culture and included it with "sweet stuff." 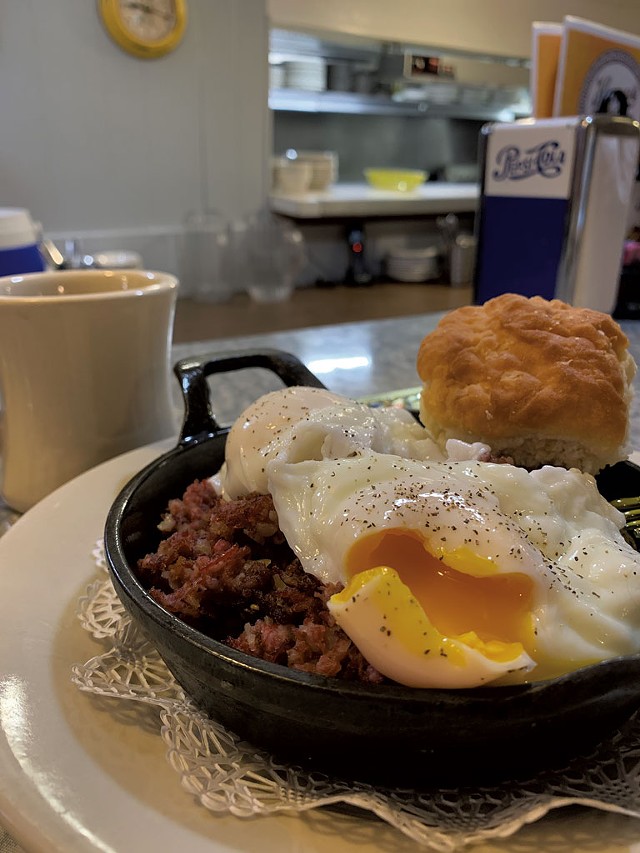 If Henry's could talk, it would have almost a century's worth of stories to tell. A downtown fixture since 1925, this modest puke-green building (sorry, but it's an apt description of the color) with a red neon sign hosts a solid breakfast game all day. It also offers the requisite vinyl booths and friendly servers who greet regulars by name.

One such regular sat at the counter on a recent Tuesday. "Every classic diner food they just do really well," said Dylan Wing of Burlington. "A diner is not going to be fancy schmancy, but it's going to be good."

"Good" means fresh buttermilk biscuits, thickly sliced toast and housemade corned beef hash, plus some Greek accents. That's due to the heritage of the Maglaris family, who have owned Henry's for the past 16 years.

Patrons from students to retirees appreciate the well-stuffed Western omelette ($9.95) or carb-loading gravy and biscuits with home fries ($9.25). Breakfast skillets ($11.25) arrive, literally, in a small cast-iron skillet piled with home fries, a scattering of melted Vermont cheddar and two eggs; variations include the housemade hash, Philly cheesesteak, or fresh spinach with feta. A recent order was topped with perfectly poached eggs. Not fancy but, yes, really good.

All-Day Eats in the A.M.

The morning meal at Juniper in Hotel Vermont is called brunch. It's served daily from 7 to 2 p.m. and offers more range than standard breakfast-plus-lunch menus. A diner can find a meal to match any time of day and every appetite. If you want a cheeseburger and fries with your mimosa, or a Negroni with a side of steamed greens, this is your spot.

For light breakfast fare, Juniper serves a bowl of Butterwork Farms yogurt topped with berries and housemade granola ($8), a green salad with apples and blue cheese ($12), and a pair of local eggs ($4). Diners who prefer a "classic" morning meal can choose blueberry pancakes ($12), biscuits and sausage gravy with eggs ($15), or red flannel hash, toast and eggs ($14).

A section of the menu falls into the live-it-up-for-breakfast category. Juniper diners — whether hotel guests or locals stepping out in their hometown — will find food that's not commonly served (or eaten) at 7 a.m., including a perch sandwich ($17), lentil and barley soup ($12), and a local cheese plate ($10). Or try the hemp-seed patty melt ($16) and start the day with a mellow high. (You might not feel it, but you will dig it!)

If the concept of "brunch" stresses you out, Monarch & the Milkweed's CBD confections can provide a gateway treat to enjoying breakfast. Hit the pastry case for a Little Chocolate Smoke Toke, then tuck into a plate of chicken and waffles. The small but mighty "fine diner" is equally appropriate for hiding out with a laptop and grabbing a window seat with friends to oversee the construction in City Hall Park across the street.

The chic spot looks arty-fancy, but the menu plays with diner staples and local ingredients. Biscuits and gravy ($10) and the aforementioned chicken and waffles (half order, which is plenty, for $13) are slathered in a fortifying sausage-pepper gravy. "Pepper" is underlined on the menu, and the punch earns its warning. Breakfast sandwiches (from $6 for the veggie option) include the Milkgriddle, a welcome update to the McDonald's favorite.

If you're dining with a group, consider ordering a towering stack of pancakes for the table. Why should appetizers be relegated to dinner? Breakfast is served all day at Monarch, and the chicken and waffles pairs just as well with an amaro at 10 p.m. as it does with Brio Coffeeworks' drip first thing in the morning. 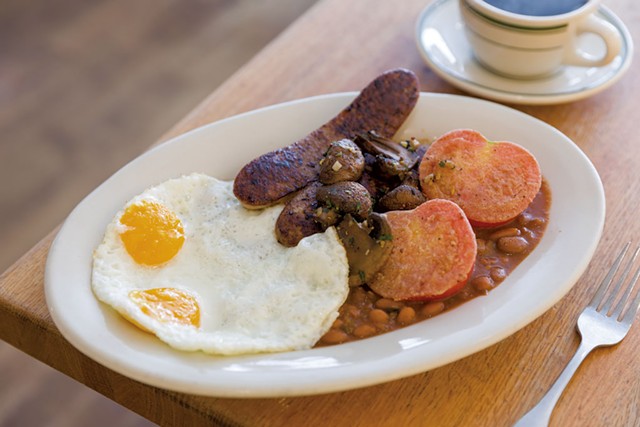 Among Burlington breakfast spots, Penny Cluse stands above the crowd physically, spiritually and culinarily. The café also draws a mighty crowd: AOC eats there when she's in town. So do Bernie and Biden; you probably do, too.

Physically: Penny Cluse opened in 1998 in a former Ben & Jerry's scoop shop on the uphill edge of downtown — partway up the one-mile incline that runs from Lake Champlain to the University of Vermont. To enter the restaurant, diners ascend a set of stairs, gaining altitude before chowing down.

Spiritually: The café has gained near mythical status in Burlington since Charles Reeves and Holly Cluse opened Penny Cluse; chef Maura O'Sullivan has run the kitchen for the past 16 years. Its legend could spring from a bucket of spuds, from the spirit of the dog for whom Penny Cluse is named, or from a bottomless cup of coffee. In other words, it's a commingling of food, vibe and caffeine.

Culinarily: Breakfast is served all day at Penny Cluse, where you can sneak a peek at cooks frying eggs and flipping pancakes. Choices range from a breakfast plate called Across the Pond ($16) — eggs, baked beans, meat, grilled tomatoes and marinated mushrooms — to a dreamy slice of banana bread with maple-walnut cream cheese ($4.50) to tofu scram ($12.25). 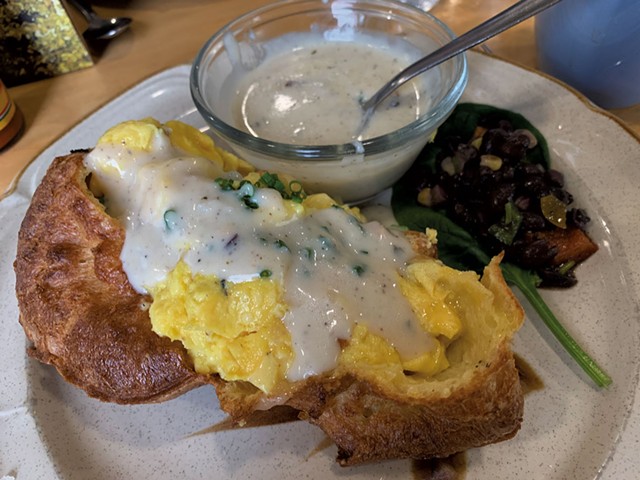 Cowboy kitsch décor, cowboy coffee and a cowboy-influenced menu distinguish this relative newcomer to the downtown breakfast scene. Tucked off the main drag for the last five and a half years, the Swingin' Pinwheel has built a devoted following but maintained a low profile, which sometimes means it's easier to score a table.

While many patrons opt for a side of hollandaise, I suggest smothering almost any savory item with the excellent peppery bacon gravy ($2.50). On a recent visit, I ran out of food before gravy and finished the rest with a spoon. "We don't judge," said the server with a smile.