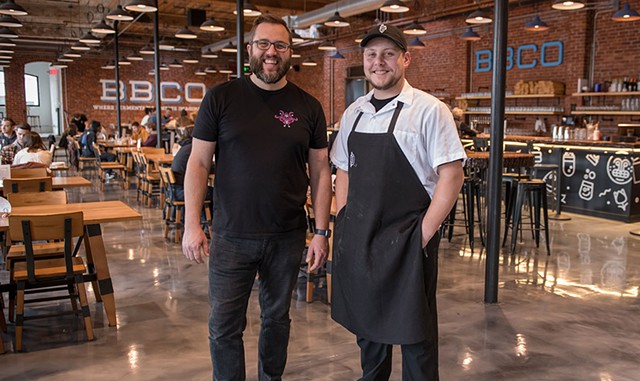 Everything about Burlington Beer's new South End taproom and restaurant is big. The massive, historic, 14,000-square-foot space has thick brick walls, high ceilings and huge windows. It seats around 235 people and boasts a spacious main dining room anchored by a 46-foot bar with a row of 48 taps. Through an opening in the wall behind the bar, customers can glimpse large wooden barrels holding the brewery's new line of sour beers that will launch in 2022.

In early October, Burlington Beer closed the original taproom at its Williston brewing facility, though it will continue to brew there. The new 180 Flynn Avenue taproom and restaurant opened for daily lunch, dinner and, of course, beer on October 12.

Burlington Beer owner Joe Lemnah, 39, said it was always his goal to locate his brewery in its eponymic metropolis; he simply couldn't afford the rent in his early bootstrap days. Seven years in, with a wide portfolio of beers distributed in the Northeast and down the Atlantic Coast — and 2021 revenues projected at $7 million — Burlington Beer was ready to head to the big city.

But, Lemnah admitted, he had not planned to go quite so big.

"I just had to put my 200-seat-restaurant pants on and go with it." Joe Lemnah tweet this

Beyond the main dining and bar area, side rooms include a merch-and-beer-stuffed retail shop and what he called a "sunroom" with another eight taps at the north end of the building. There, at high-top tables while waiting to be seated, guests can sip the brewery's Elaborate Metaphor New England pale ale or the unexpected Mocaccino that looks like a pale ale but tastes like a stout. ("It's meant to be kind of a mind-fuck," Lemnah explained with a chuckle.)

Walk-ins may be lucky enough to land spots at the chef's counter bordering the shiny, 1,100-square-foot kitchen at the rear of the building. Those seats provide a view of the 26-foot-long hood vent under which the cooks sizzle burger patties, grill beer-brined wings and crisp up hand-cut fries.

The 15-member culinary team is headed by executive chef John Roettinger and sous chef Avery Buck. The two met working at Hen of the Wood in Burlington. Roettinger was most recently chef at Mule Bar in Winooski, and Buck sous cheffed at Doc Ponds in Stowe.

The new restaurant is a huge upgrade from Burlington Beer's original industrial park taproom, which was carved out of a corner of the brewery. There, the kitchen was shoehorned into a cramped former office dubbed "the closet" and furnished with three panini presses, a tiny oven and a single induction burner. The baker worked out of a converted conference room.

Burlington Beer's city home is an imposing edifice, which most recently housed Vermont Hardware. It had been renovated by its owners, Dominique and Trey Pecor, with new HVAC and electrical systems, energy-efficient windows, updated lighting, and re-poured concrete floors.

When Lemnah first came to look at the space, "I walked in and was like, Holy fucking shit," he recalled. "This place felt so perfect and so right, I just had to put my 200-seat-restaurant pants on and go with it." 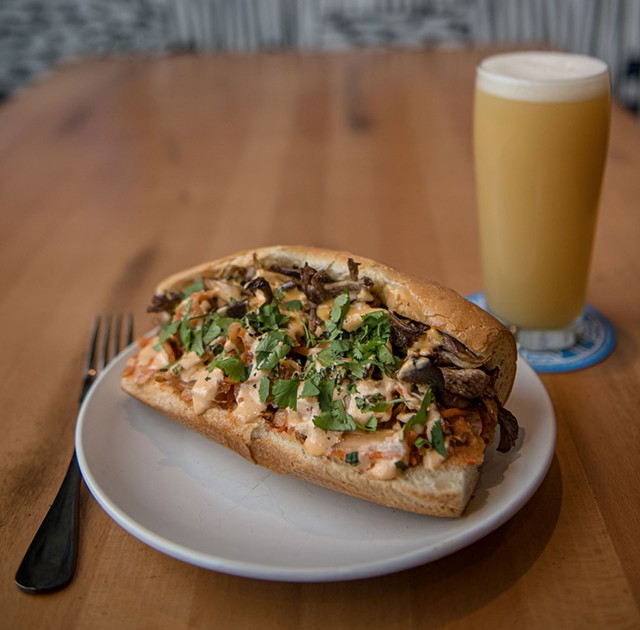 Construction took several months longer than planned and cost $1.2 million, Lemnah said. His goal was to keep some of the building's rough-edged charm and honor its history. It was built in 1902 as the U.S. production facility of Auguste and Louis Lumière, French brothers and cinematic pioneers who also invented an early color photography process. According to the Vermont Historical Society, it is the only Lumière production building left in the world.

Those familiar with Burlington Beer's Williston space will recognize some artistic touches by local artist Sunniva Dutcher and the brand's New York-based creative director, Tim Fealey. But the visual impact of their work is more minimal in Burlington. "We'll continue to add our vibe," Lemnah said, "but I kind of wanted to celebrate the natural beauty of the building."

Open for about a month, the restaurant was still building its vibe during my two recent visits, but it showed great promise. Service was friendly though slow at the onset of both meals. I wished for a QR code ordering option, which is available at high-tops in the main dining room and in some of the satellite rooms.

During our first visit on a busy Thursday night, my husband and I ordered almost exclusively bar food to pair with our beers: Time of the Chimpanzee, a juicy New Zealand IPA, and Creatures of Magic, a piney New England IPA. (Beers range from $4 to $11.)

The fries ($7) were superlative: slender and crisp with a rosemary-peppercorn aioli. "We're going for the McDonald's fry," Roettinger told me later. "We want to do the best execution of whatever we do."

A fish sandwich ($17) starred cod from Starbird Fish, caught in Alaska by a Vermonter. The thick, moist filet was coated in crunchy batter and coddled in a freshly baked potato bun with house-pickled onions, hopped honey-dressed slaw and tartar sauce. The two-jointed grilled wings ($14) were meaty and massive — as if they were trying to match the scale of the dining room.

We also ordered the beet salad ($12), a rotating seasonal offering among the trio of salads. It was excellent, with a creamy blue cheese-punctuated dressing and lots of crunch from crushed pepitas.

When we visited again with a friend just ahead of the 7 p.m. Sunday evening close, the dining room was quieter. My husband and I sampled new-to-us beers: Uncanny Valley, a fruit-forward New England IPA, and Petal Prophecy, a honeyed IPA. Our friend, who's not a beer drinker, ordered a local hard cider after lingering over the intriguing cocktail list.

I have a rule against reordering an item when eating out for work, but I couldn't resist the siren call of those fries. We also indulged in a hunk of the excellent, dark-crusted house sourdough ($5), which came with a generous swirl of maple-beer butter flecked with crunchy sea salt.

After carbo-loading, we forged on with the smash burger made with local beef and house beer-brined pickles ($15); the fried chicken sandwich ($15), drizzled with hop-infused honey; and the mushroom bánh mì ($14).

The veggie choice was the meal's sleeper hit. Locally farmed, crisp-roasted oyster mushrooms deep with woodsy flavor and just the right touch of Chinese five-spice powder were nestled with Pitchfork Pickle kimchi and spicy mayo in a crusty baguette-meets-hoagie roll. 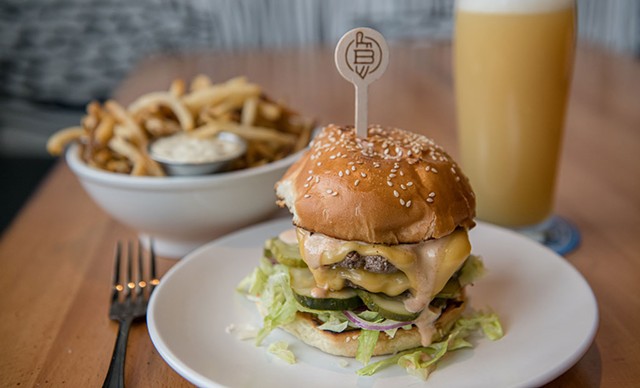 We sampled two salads: a creamy Napa cabbage with pickled carrots and radishes, topped with toasted bread crumbs and shaved, cured egg yolk ($14); and the seasonal house salad ($12) of baby kale with the fun addition of diced, pickled apple, as well as squash, sunflower seeds and a tangy-sweet vinaigrette. Each delivered balanced flavor and texture and was ample enough to share.

As the dining room emptied, we concluded our feast with two desserts: the pumpkin cheesecake ($10) and the chocolate stout layer cake ($11). Both were beautifully presented, as one might expect from head pastry chef Sam LaCroix, who has worked at Hen of the Wood in Burlington and the Inn at Shelburne Farms.

The desserts were also quite shareable, especially the intense cake, which was drenched in dark chocolate with a solid chocolate piece on top that appeared to be sprinkled with almonds. I later learned that the restaurant is 100 percent nut-free and that toasted apricot kernels play ringer in several dishes. The cheesecake was our favorite for its rich creaminess and crunchy streusel, the sweetness balanced by crème fraîche, and the slightly bitter beer-infused caramel.

I had been torn between the mushroom sandwich and one of the large plates on the menu — the clams and housemade chorizo ($21) with kale and an Elaborate Metaphor broth — but the dish had sold out that night. The clam delivery had yet to arrive when, during an interview, I sampled two other large plates: the birria bowl ($19) of rich braised beef deeply flavored with toasted peppers and warm spices and topped with beer-pickled red onion and Oaxacan cheese; and a grain bowl ($18) with fried whole clusters of oyster mushrooms, Pitchfork Pickle kimchi and a soft-boiled egg.

Roettinger and Buck said their goal is to create a menu that is casual, approachable and inspired by local, seasonal ingredients. "What I love about Vermont," Roettinger said, "is being able to shift food with the seasons." As the restaurant settles in, the team has also noticed that, rather than beer driving the experience, "People are actually coming here to dine," Buck said. "It's less of a taproom vibe," Roettinger added.

"We want to be everything for everyone," Lemnah said. A big goal if ever there were one.

The original print version of this article was headlined "Going Big"