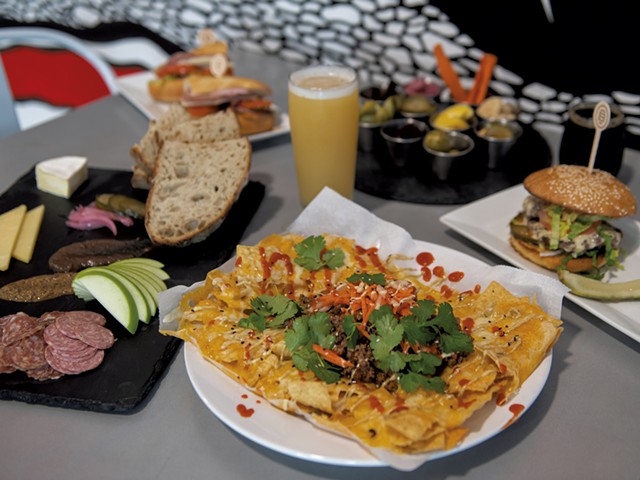 At Burlington Beer's brewery and taproom, visitors can not only drink the beer, they can eat it, too. In mid-January, chef Matt Spaulding and baker Josh Lemieux launched a new taproom menu designed to complement and showcase the brewery's expansive range of beer styles, from sours to stouts.

The culinary team reduces beer to mix into its own special sauce for a double burger layered with housemade American cheese (yes, that's a thing) and beer-brined pickles on a house-baked bun. It pairs fresh, soft pretzel nuggets with beer-infused cheese fondue and grainy mustard made with vinegar fermented from beer.

Even Lemieux's desserts feature beer. His superlative fudgy raspberry brownie made with stout has won over even my chocolate-resistant heart.

Beyond being delicious, the food also reflects the firmly held credo of brewery founder-owner Joe Lemnah. Despite significant craft brewing credentials, including two years at Dogfish Head Craft Brewery in Delaware and three years at Evolution Craft Brewing in Maryland, he does not take himself too seriously.

Lemnah, 38, credits his wife, a fifth-grade teacher, with the company tagline: "Where fermentation meets imagination."

"It's not highfalutin," the brewer said of Burlington Beer's approach during a tour of the facility on a recent afternoon. "There are no limits. It's meant to be fun."

Fun seems to be working.

Although Lemnah did lay off a few taproom employees in the early months of the pandemic, he was able to cover two and a half months of payroll with a $156,000 Paycheck Protection Program grant and has fully rebounded since. "The alcohol industry is definitely recession-proof," Lemnah noted.

Burlington Beer produces some 70 to 80 different beers a year; 20 at a time are on draft at the taproom, and more are available in cans. The beer is currently distributed throughout much of the Northeast, and more Atlantic Coast states are coming online soon. Since the brewery's most recent expansion, in October 2020, monthly revenue has hit about half a million dollars, according to Lemnah.

He's proud of the company's success, especially his ability to compensate employees well. But at the end of the day, Lemnah said, "It's just beer. We're not solving the world's problems for people. We're just solving today."

Your day will definitely be improved, if not solved, by a visit to the Williston taproom for a brew and a bite. Dine-in and takeout options are both available.

The high-ceilinged warehouse taproom space is not highfalutin, as Lemnah promised; the floor is concrete, tables and chairs are utilitarian, and steel brewing tanks are visible above a temporary curtain partition. But the walls feature the brand's fanciful, eye-catching designs by New York-based creative director Tim Fealey, as well as a striking mural by local artist Sunniva Dutcher.

"This place is way cooler than me," Lemieux joked.

Takeout orders can be picked up at the counter; eat-in orders are placed there after appropriate on-site dining COVID-19 screening. Those eating in can get plastic cups of draft beers, such as a fuchsia-tinted, double-fruited gose or a cloudy, New England-style IPA featuring New Zealand hops. They also get a buzzer that vibrates when food orders are ready to be picked up at a small table near the main counter.

The brewery began serving food in 2016, as required by Vermont regulation in order to offer full beer pours rather than just samples. Spaulding, 32, had worked in the taproom kitchen for two years before his promotion to chef in December, when original chef Austin Zonneville became head of sales and distribution.

Line cook Andrew Kinville has since joined Spaulding in a tiny kitchen — about eight by 15 feet — that they call "the closet." The duo churns out a diverse and interesting menu with just three panini presses, a small oven and a single induction burner.

"The atmosphere inspires a high level of creativity," Spaulding remarked, referring to the general tone set by Lemnah.

Lemieux, 40, a New England Culinary Institute alum, came on board in December, too, when Lemnah offered to convert an unused conference room into a bakeshop for him. The baker had lost his longtime job at the Williston Coffee Shop due to COVID-19. While there, he had been baking bread for Burlington Beer's taproom menu and supplying large quantities of chile- and cinnamon-spiked chocolate cake as an ingredient for its Ancient Power double stout.

"We were all missing the bread. Not just the customers, but us personally," Lemnah said. "We needed the bread back."

I strongly recommend buying a loaf of Lemieux's top-notch sourdough bread ($6) to take home along with a four-pack of your preferred beer ($13-32) — such as the brewery's flagship Folk Metal oatmeal stout with appealing notes of coffee and slightly burnt toast, or Elaborate Metaphor, a judiciously citrusy New England pale ale.

Many of the beers pop up as ingredients, like hidden Easter eggs, throughout the menu. Lemieux's bread dough is made with a wild rice brown ale called Peasant Bread. Elaborate Metaphor flavors the brine for the excellent pickles featured on the cheese board ($19) and layered on the burger ($13).

The burger's Complicated sauce is named for, and made with, the brewery's It's Complicated Being a Wizard double IPA. "It's not that complicated," Spaulding said with a grin, before ticking off multiple sauce ingredients, including a reduced beer gastrique, housemade mustard and roasted garlic.

Wizard, as the brew is called for short, also flavors the aioli slathered on the BLT ($11), in which Lemieux's bread plays the perfect chewy, lightly tangy foil for the filling.

Whatever double IPA is currently available gives an edge to the double dry-hopped ranch dressing on the house salad ($9). It's so good, I would happily eat grass clippings under lavish drizzles of its tangy creaminess. And the spiced pickled beets on that salad impressed me more than I ever thought pickled beets could.

Overall, Burlington Beer's pickle game is strong. In the Italian sub ($13), briny mixed pickles amp up the generous layers of meat and cheese in a crisp, housemade roll. My family was impressed with a recent special of bulgogi ground brisket nachos ($15), from the sweet-salty meat to the house-pickled vegetables and charred scallion miso aioli.

You might not expect a taproom to offer excellent dessert choices, but few breweries have a full-time baker, much less one with Lemieux's chops.

In perhaps the most meta cross-pollination loop of all, the aforementioned raspberry brownie ($5) owes its deep fudgy fruitiness to freeze-dried raspberries, single-origin Guayaquil chocolate and a good dose of Heart Swap, a raspberry double stout. Each batch of that beer, in turn, is brewed with almost 400 pounds of raspberry purée and 350 pounds of those brownies.

"It's a beer in brownie form," Lemieux said. "And Heart Swap is the brownie in liquid form."

While some craft beer purists might wrinkle their noses at fruit-drenched, syrupy pastry stouts such as Heart Swap, Lemnah is pragmatic.

"They go against all brewery training I've ever had," he acknowledged. "But, at the end of the day, we can't drink all the beer." He understands that it's good business to satisfy palates beyond those of a narrow group of beer aficionados.

If some know his brewery for its "weird ingredient" beers, Lemnah likes to think of them as "culinary inspired." Having worked in kitchens himself, he said, "I've always loved to cook."

Originally, Lemnah noted, the company was "dinged for [our pastry stouts] not being sweet enough. I said, if they want it sweet, then we'll fucking make it sweet. They're unbalanced on purpose, but still good."

Prior to our tour, Lemnah had been up on a platform checking the progress of a batch of malt and hot water in a mash tun. Then he slid down the banister to greet me.

He later described the mash tun step in the brewing process with a mischievous grin: "Ninja enzymes come up and chop the starches into digestible sugars to feed the yeasts."

At another point, as employees prepared to dry hop a New England IPA with New Zealand hops, Lemnah waxed poetic about "the beautiful bio-transformative interactions that happen between the hop oils and yeast during fermentation that help the flavors and aromas bloom."

Balancing passion and pragmatism is part of a bigger picture that enables Lemnah to do what he wants, whether it's hiring a full-time baker or pushing the brewing envelope. For him, the business of craft brewing offers plenty of room for both the serious and the fun.