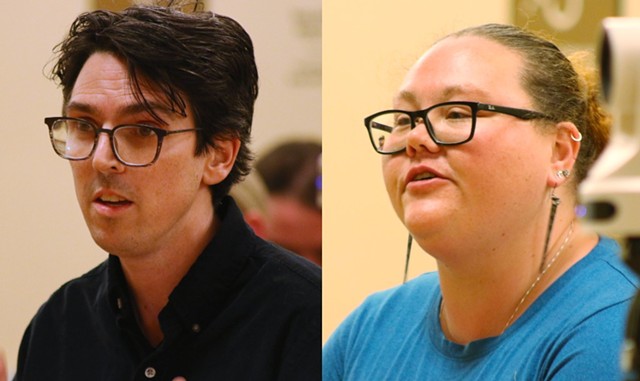 Burlington city councilors will debate whether to revoke or suspend an entertainment permit for Orlando's Bar & Lounge after hearing complaints that the venue has repeatedly let bands play past permitted hours.

The downtown bar is allowed to have live, amplified music on its outdoor patio until 10:30 p.m. on weekdays and 11 p.m. on weekends. But at a formal hearing on Monday night, a neighbor of the Lawson Lane spot testified that loud music routinely exceeds those time limits.

"This is something they agreed on, and they're not able to stick with it," Holli Bushnell said of the bar's permit conditions. "I do question how many times going over your hours, 20 minutes here or there, becomes negligence and stops being unintentional."

Bar owner Brandon Mossman, meanwhile, testified that losing his entertainment permit would force him to close the bar, which opened in 2019.

"Because we went over 20 minutes, you're gonna shut down a business?" he asked. "If you pull this permit, this business will end because it can't survive without the patio."

Soundbites: New Venue Alert: Orlando's Bar & Lounge
By Jordan Adams
Music News + Views
Councilors called the hearing after receiving two noise complaints from Bushnell, who lives in a nearby apartment on Pine Street. Bushnell and another neighbor had previously complained about noise in summer 2020; that resulted in the 10:30 p.m. hard stop on weeknights. At a licensing hearing then, the residents testified that the bar had violated its permit 42 times between August and October 2020.

On Monday, Bushnell said that while the venue has improved some since then, the music "continues to be extraordinarily loud."

Mossman said it's "the nature of the business" that bands unintentionally go over time when they're playing a set. The real issue, Mossman said, is that other downtown businesses are allowed to play music later than his bar.

"I'm not granted the same opportunity as the business next to me," he told councilors, adding, "It's biased, it's discriminatory to our business, and it's just not fair."

Mossman also charged that Bushnell, who works for the city’s parks department, has a personal vendetta and is leveraging her relationships with city councilors to shut down his business.

Bushnell, for her part, said many neighbors have shared their concerns with her but are too afraid to speak out publicly. One couple did submit a letter in support of Bushnell’s complaint, saying that the music “reverberates off of the buildings” and is “absolutely way too loud.” They suggested either banning music on the patio or forcing Orlando’s to find a way to dampen the sound.

The council has 30 days to deliberate and issue a written decision.

Board Wants Burlington to Treat Gun Violence as a 'Public Health Emergency'
By Derek Brouwer
Crime
Also on Monday, councilors unanimously voted to refer a resolution calling for a broader response to gun violence to its Public Safety Committee for review.


The city has recorded 51 instances of criminal gunfire since 2020, compared to an average of two incidents each year between 2012 and 2019. The increase has had an outsize effect on youth of color and immigrant communities, Seven Days detailed in a cover story last week.

Penned by the Burlington Board of Health last month, the resolution calls on the city to partner with schools and mental health-focused agencies to address the recent surge in gunfire, which the board calls a public health emergency.

Warning Shots: Burlington's Immigrant Community Seeks Solutions to the Gun Violence That Is Claiming Youths
The fatal shooting of Hussein Mubarak on Burlington's Luck Street and the arrest of Abdiaziz Abdhikadir revealed a largely unseen dimension of Burlington’s escalating gun violence problem. Amid the unprecedented spike in gunfire, families that came to Vermont to escape conflicts abroad are now losing children to violence in its endemic American form.
By Derek Brouwer and Courtney Lamdin
Crime
The resolution recommends ways to end the gunfire, such as by creating a new office of gun violence prevention. It also encourages city leaders to lobby legislators to repeal the state’s so-called “preemption law,” which prevents local governments from regulating firearms. And it demands that the legislature pass charter changes approved by Burlington voters in 2014 that would have banned guns from bars, allowed police to seize guns following incidents of domestic violence and required safe storage of firearms.

The council aims to pass its own resolution in December, just before the legislature reconvenes in January.

"I'm frustrated that the legislature has not taken action," Councilor Ben Traverse (D-Ward 5) told Board of Health members at the meeting. "I'm excited that you've provided us this tool for us as a council to take this on and look forward to what we can get done by the end of this year."

Carson most recently worked as the director of education and human capital development for the Iowa Judicial Branch, where she planned diversity and equity training programs for more than 2,000 employees. She replaces Tyeastia Green, the office’s first-ever director, who resigned in March.

"I just really feel called to the city of Burlington," Carson told the council. "I brought my children here, and they love it, and so I'm really, really excited to have the opportunity."

"Rest assured that you will be challenged, but please never lose sight of your responsibilities of ending racial disparities and fostering a sense of belonging," Dieng said. "Burlington [has great people] with so much wisdom and also passion of rebuilding this city. Please know that they all open their hands in welcoming you here."