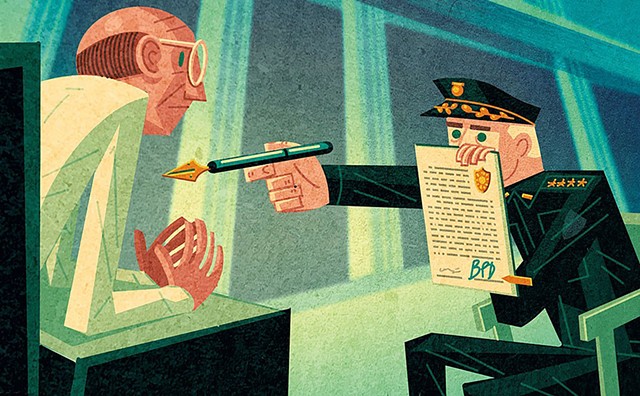 The Burlington City Council is on the verge of approving a new contract for the city's police union, the first agreement since the council's controversial decision to cut the force two years ago.

The tentative three-year agreement with the Burlington Police Officers' Association would replace a contract that expired on June 30. The deal includes pay raises for officers and addresses issues of police oversight — though perhaps not to the degree that some had hoped, according to Mayor Miro Weinberger.

The mayor declined to share the contract's contents until the council ratifies it. Councilors had planned to vote on the agreement Monday night, but after discussing the matter at length in executive session, they opted to hold off until a special meeting next week.

"Enough people needed a little bit more time to be able to work through the details of the proposal and all the implications before they could decide," Councilor Gene Bergman (P-Ward 2) told Seven Days on Tuesday. "The postponement is meant to give people that time."

"It's important that we do this right, because public safety is at the forefront of people's needs in the city." Councilor Gene Bergman tweet this

The contract vote is certainly consequential. Police reformists have argued that the recently expired contract was a barrier to department oversight, and they hope the new agreement will change that. Others, seeing an uptick in gun violence and property crimes, have said the union needs a stronger contract to rebuild its ranks, which have dipped precipitously since the council vote in 2020.

Bergman said he feels the weight of the decision.

"It's important that we do this right, because public safety is at the forefront of people's needs in the city," he said. "The contract plays a pivotal role in having a public safety system that works."

Much has happened since the last police union contract, which covered four years, was approved. Following George Floyd's murder by police in May 2020, activists in Burlington flooded the streets in protest, spurred by recent local instances of police violence involving young Black men. Councilors voted swiftly to reduce the size of the police force by 30 percent through attrition. But cops left faster than anticipated, and the roster dropped from 91 active officers to 53, plunging the city into what Weinberger and acting Police Chief Jon Murad have called a public safety crisis.

Councilors have attempted to undo some of the damage. Last fall, they authorized additional police hiring and voted to use thousands of dollars for recruitment and retention programs; late last month, the council approved a $1 million "rebuilding plan" for the force, with signing bonuses and other perks such as housing and childcare stipends.

Reform efforts are also under way. Last fall, the city hired Virginia-based nonprofit CNA to perform an assessment of the department. Its wide-ranging report identified serious deficiencies, including inefficient staffing schemes, inadequate training and oversight, and evidence of racial bias. CNA concluded that the union contract was partly to blame.

Before Monday's meeting, councilors had been briefed on police negotiations in three separate executive sessions. Councilors did not participate in direct talks with police union members, nor did Weinberger. But the mayor and Murad both publicly lobbied for a contract favorable to the union to stem the tide of officer departures.

"[The contract will] help us turn around this very problematic situation with respect to the loss of officers." Mayor Miro Weinberger tweet this

Weinberger said the tentative agreement would reverse the trend by working "hand in hand" with the rebuilding plan, which aims to bring the department to 85 sworn officers, just two short of its authorized cap, over the next three years. He added that Burlington cops would be "very competitively paid" if the council ratifies the agreement.

"[The contract will] help us turn around this very problematic situation with respect to the loss of officers," he said. "It also gives the chief and his leadership team the tools they need to rebuild the department over the next three years."

There could be provisions that please reformists, too. Weinberger said the contract includes a "significant policy change" regarding police accountability, one that's in line with CNA's recommendations. The mayor wouldn't elaborate on which of CNA's suggestions is included in the tentative contract, but he did say which one isn't.

CNA had recommended creating a Citizen Review Board whose members would have the final say in internal investigations, rather than leaving that job to the chief. The recently expired police contract bars such oversight by giving only the chief, city attorney, human resources director and a "department investigator" access to information about employee investigations. But the city didn't negotiate giving a review board final say over discipline, Weinberger confirmed, despite it being a high priority of the council's bipartisan Public Safety Committee.

Progressive councilors had attempted to create a citizen review board in 2020, before the CNA report was even commissioned, but Weinberger vetoed it. The measure would have required changing the city charter.

CNA pointed to other contract provisions that hamper reform, including one that allows the department to scrub officers' disciplinary records after just one year in some cases. The consultant advised keeping the documents for officers' full tenure.

Weinberger acknowledged that the tentative agreement "doesn't do everything" CNA recommended. Other reforms could be addressed in future changes to the city charter, he said.

"No one should expect that this contract is going to end all of the police oversight discussions we've had in recent years," he said, "but it does make progress towards them."

Whatever language is in the contract, the police union approves: A majority of the membership voted to adopt the agreement earlier this month, according to Officer Joe Congdon, the union's public information officer. He declined to discuss the contract until it's final.

"The union supports the temporary agreement we have with the city," Congdon said. "We hope the council officially ratifies it and signs it."

Correction, July 20, 2022: A previous version of this story contained error about who participated in contract negotiations.

The original print version of this article was headlined "Re-fund the Police?"