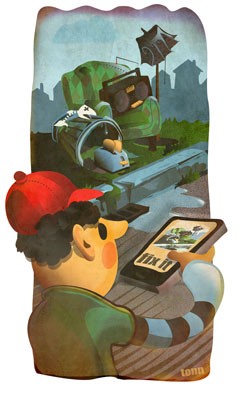 The smartphone, not the dump truck, may turn out to be a more effective weapon in Burlington’s war on greenbelt garbage.

For the last two months, the city’s code enforcement office has been using SeeClickFix, a crowd-sourcing app for the web and mobile devices that allows users to photograph and report low-level neighborhood problems such as trash, blocked sidewalks and graffiti. Users can vote on which code violations are most urgent; the more votes an entry gets, the higher it appears on code enforcement’s to-do list.

Best of all: Users can track the progress of complaints to see how quickly the city is fixing — or not fixing — a problem.

Director of Code Enforcement Bill Ward says the use of SeeClickFix is meant to “change the paradigm” of illegal dumping in the city. “Things on the greenbelt send the message that no one cares,” Ward says. SeeClickFix “sends the message that people are paying attention and care about the neighborhood.”

The app is the brainchild of web developer Ben Berkowitz of New Haven, Conn. In 2008, he complained to city hall about graffiti on his building — and never got a call back. Neighbors who expressed similar concerns got the same silent treatment. Berkowitz hatched SeeClickFix so citizens could see what others were reporting and when — or if — city officials responded.

More than 80 cities currently employ SeeClickFix, according to Kevin Donohue, the company’s community manager. The ad-supported app has been implemented in municipalities as small as Andover, Mass., as large as Chicago, Ill., and as far-flung as Gdynia, Poland.

Burlington’s code-enforcement office paid $400 to license the app on a trial basis through June of next year and right now is the only city department using it. If the app is successful, Ward says he’ll sign up for another year at a cost of a few thousand dollars. The exact price depends on which features the city wants.

To demonstrate the app, Ward took me trash hunting on North Winooski Avenue. We soon encountered a case of illegal dumping: a dilapidated entertainment center sitting next to the curb. Ward took out his phone, snapped a photo and uploaded it to the app, which used GPS technology to pinpoint our location.

In so doing, he sent an alert to his team of code-enforcement officers. Meanwhile, the occupants of the house noticed their curbside contribution had attracted the attention of an official-looking guy and another one taking notes. So they moved the stuff to the backyard. Problem solved. Ward took a photo of the pristine greenbelt and marked the case “resolved” in the app.

On Buell Street, Ward spotted a bag of garbage on the greenbelt. Again he submitted a photo and comment to the app. This complaint was resolved in a more conventional matter: Someone from code enforcement notified the building’s property manager, changing the case’s status to “acknowledged” in the app. Shortly after that, the trash was cleaned up and marked “closed” in SeeClickFix. A new photo showed a trash-free greenbelt.

As Ward sees it, transparency is SeeClickFix’s best feature. “If you’re the one who reported it, you can follow it,” Ward says. “You’ll know that Bill Ward or someone on his staff acknowledged the complaint, and you’ll have the satisfaction of knowing someone’s taken action.”

SeeClickFix isn’t meant for emergency use — that’s what good, old-fashioned 911 is for — but it can indirectly aid emergency responders. Government Technology magazine reported that in the wake of Hurricane Sandy, the app was used to pinpoint storm damage and assemble volunteer teams, keeping 911 lines open for more pressing emergencies.

What sets SeeClickFix apart from locally focused apps and networks such as Front Porch Forum or Patch.com is that it not only engages users but integrates them into the government’s workflow. “We want more citizens participating and documenting concerns, but if there’s no feedback loop, then citizens are just gonna get discouraged,” Donohue says. “On the other hand, governments are going to have no interest if citizens aren’t using it.”

New Haven had a 311-hotline system in place when Berkowitz invented SeeClickFix, but very few people were taking advantage of it. Meanwhile, Berkowitz convinced the New Haven Independent, an online news site, to display SeeClickFix widgets directly on its home page. As the app gained traction, “Finally the city said, ‘They do it better than we do, why don’t we go with what’s working?’” says editor Paul Bass, noting that SeeClickFix represents “the new direction that news is heading.”

Governments, media outlets and citizen groups have hosted SeeClickFix on their respective websites. In Burlington, Local Motion tried it before the city; the advocacy organization invited members to post ideas for improving pedestrian and bicycle infrastructure.

Now all reports are directed to code enforcement. Since October, most have pertained to illegal dumping, but other issues have cropped up, too: In the last couple of weeks, citizens have used SeeClickFix to alert code enforcement about illegal parking on sidewalks or greenbelts, downed traffic signs and graffiti.

Last week someone reported a bag of used needles on Bradley Street, near a property owned by Champlain College. Ward’s office took care of the cleanup but also notified Burlington police and college security of potential criminal activity.

The majority of problems reported on SeeClickFix are resolved by contacting either the property owner or the Department of Public Works. But some reports have required more research. In one case, a code-enforcement employee noted that a graffiti-tagged lamppost wasn’t city property but said the office would look for a contact person at the church that owns the lamp.

Complaints about non-code issues generate helpful information. Report on a burned-out streetlight, for example, and SeeClickFix provides the phone number for Burlington Electric. Ward says features can be added to the app or tweaked depending on how people use it.

“Initial indications are that it’s well worth the couple-thousand-dollar investment, and it could even be less than a thousand if we partner with other departments,” Ward says.

You could argue the app is already paying off in positive PR. As of Monday morning, Burlington ranked 10th on SeeClickFix’s list of best performing cities, which measures how many complaints have been led to fixes and how long each took to get resolved.

Of course, the more people use it — which is a key measure of the app’s success — the harder it will be for the city to hang on to that accolade.