On a secluded slice of roadway in Burlington last week, Ava Foster stepped to the edge of a seven-foot-tall quarter-pipe and slid down the ramp on her skateboard.

The 9-year-old is a regular at this South End spot known as the Barriers, an unsanctioned skate park on a stretch of the still-unbuilt Champlain Parkway. But its days might be numbered, threatened by imminent plans for construction, unhappy neighbors and the city, which plans to dismantle the quarter-pipe, the newest park feature and one that flies in the face of local ordinances.

Ava's father, Brendan Foster, hopes the city will change course and inspect the ramp before tearing it down.

"If it's safe, why not keep it, at least until that becomes a highway?" said Foster, who owns the Maven skate shop on Church Street. "[That] could be next year. It could be another five years. We have no idea."

Construction of the parkway, a 2.8-mile road that would connect Interstate 189 and Route 7 with downtown Burlington, got under way years ago. But the work was halted, and whether it should be completed has been discussed for decades. Since the 1990s, skaters have created jumps, ramps and rails on an otherwise-forgotten 1,000-foot paved stretch of the road between Home Avenue and Pine Street.

City officials had generally tolerated the DIY park until this summer, when a neighbor complained about the quarter-pipe, a sloped ramp that skaters use to perform tricks. On Monday, the Burlington City Council ordered the Department of Public Works to remove the structure. And city officials now say the entire park could be shut down.

Outspoken neighbors have blamed the skaters for making noise, starting fires and dumping trash, and they say the city has been too lenient for too long. The best way to stop the activity, Public Works Director Chapin Spencer told one resident, is to build the parkway. That construction could begin as soon as next spring.

"It was always a good place to go, where nobody would hassle you. You could be free." Collin Hale tweet this

The crackdown has ignited familiar tensions between skaters and the public and renewed scrutiny of a beloved park already endangered by the highway project. For some die-hard skaters, the slated removal of the quarter-pipe is a harbinger of things to come.

"It's really just been a matter of time. I've just been waiting for a bulldozer to go back there and destroy everything," said Evan Litsios, 30, who has skated at the Barriers for more than a decade. "I don't know what the skate community in Burlington looks like after the Champlain Parkway goes through."

Burlington-area skaters have long fought for a place to call their own. In 1989, it was illegal to skate downtown, so they began lobbying the city to build them a park.

In 1997, the city council approved a spot on the waterfront, east of the Moran Plant. The planning commission rubber-stamped those plans the following year, but three dozen residents appealed the permit and sued in Vermont Superior Court over concerns that the noise would reach their nearby homes.

In June 1998, skaters caught a break when then-governor Howard Dean signed a lease allowing construction of a temporary park where the Barriers is today. The city's 6,500-square-foot venue featured ramps and jumps, all covered by its insurance policy, the Burlington Free Press reported then.

The waterfront skate park opened in 2000, after the city and neighbors reached a compromise on the park's operating hours. In 2015, the city debuted a new $1 million park dedicated to prominent Burlington skateboarder, artist and DJ Andy "A_Dog" Williams, who had died of leukemia the year before.

Many skaters dug the new park's polished concrete bowl and world-class features — blessed by OG pro skater Tony Hawk, no less. Others were loyal to Talent, a family-friendly indoor park that opened in South Burlington in 2001 and has launched numerous pro skating careers. But the Barriers' grittier, less-perfect structures appealed to the anti-establishment ethos at every skater's core.

"The fact that everything back there was designed and built by skateboarders, it just [makes for] ideal conditions," longtime skater Litsios said.

Skaters tend to be creative do-it-yourselfers, said Litsios, who publishes a zine about Queen City skateboard culture. The Barriers was born from necessity — by a bunch of teenagers looking for an outlet — and has endured as an escape.

"It was always a good place to go, where nobody would hassle you. You could be free," said Collin Hale, 34, a Cambridge resident who grew up skating in Burlington and later went pro. "It's become sort of a building block for the community, where somebody can make something to share."

This summer, more than 100 skaters donated money to the quarter-pipe effort, the most ambitious project at the Barriers in years. They hauled in bags of cement and shaped the concrete into a vertical ramp. Building the 7-by-10-foot ramp took just two days, but the neighbors noticed.

In mid-June, Jay Fisher filed a complaint on SeeClickFix, an app that Burlingtonians use to report issues such as potholes and illegal dumping. Although it's buffered by a copse of trees, Fisher's home on South Crest Drive is about 200 feet from the skate park.

"It sets a dangerous precedent for the city to allow this kind of activity to grow to fruition." Jay Fisher tweet this

Fisher has coexisted with the skateboarders for three decades, but he says the park has increasingly become a nuisance. Besides the typical scraping sounds, Fisher says he frequently hears yelling, cussing and music from radios — and once, even bagpipes — from the skate park. A few years ago, someone shot fireworks onto his roof. He's found human excrement and burned spray paint cans around the park.

For Fisher, the quarter-pipe was the last straw.

"It sets a dangerous precedent for the city to allow this kind of activity to grow to fruition," he said.

After visiting the site in June, City Engineer Norm Baldwin determined that the ramp violated a city ordinance that bans unpermitted structures from public rights-of-way. He wrote the skaters a letter, giving them 30 days to agree to remove the ramp or ask the city council's License Committee for an encumbrance permit, which would require that the skaters have their own insurance policy. Unlike in the 1990s, the city's insurance carrier was unwilling to cover the park ramp.

"There's a greater measure of physical liability to the city with this quarter-pipe than all of the other things they have out there," Baldwin said last week.

But the city's insurance carrier later advised Baldwin that the other ramps and jumps may create just as much exposure to risk as the quarter-pipe. Baldwin said city staff will have to evaluate the entire park with this in mind.

"It's unclear what the resulting outcome will be," he said, adding, "My general take was to leave it as is and to not unearth the whole thing, but that's not necessarily my decision."

A handful of neighbors urged the council's License Committee last week to close the park.

"We purchased this home knowing that there might be a road but not knowing that individuals would be allowed to just do whatever they want," said Jennifer Jorgenson, Fisher's next-door neighbor. "There are plenty of places to be able to skateboard in the city," she added. 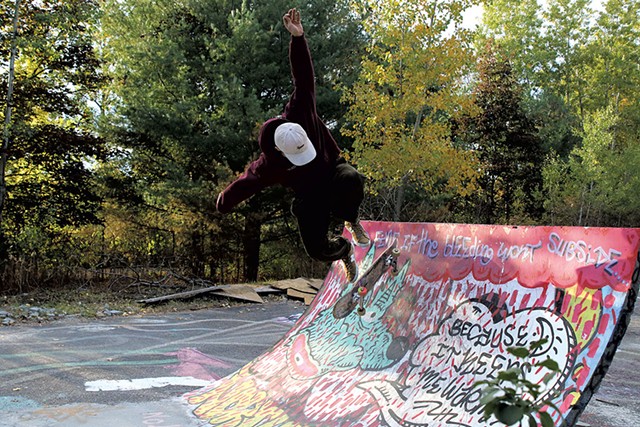 "The building of this structure created much, much more activity in the area," said Katy Wallace, another South Crest Drive resident. "I worry about the safety of our community just being in that space at this point." Neither neighbor responded to Seven Days' interview requests.

Sam Watson, who spoke for the skateboarding crew, told councilors that skaters aren't responsible for all of the issues that have vexed the neighbors. He argued that skaters actually deter unsavory characters — a sentiment that other longtime skaters shared in follow-up interviews with Seven Days.

Watson, who declined a request for comment, told councilors that the Barriers provides a place to socially distance during the pandemic. He asked if they could keep the ramp intact until the parkway construction begins, but they turned him down. The full council agreed on Monday, voting to direct city public works crews to remove it.

Meantime, the parkway's construction start date is inching ever closer. In July, the city hosted a public hearing on the project's design after residents complained that it would increase traffic in the Maple and King streets area — the most diverse and second-poorest neighborhood along the parkway's route. The Federal Highway Administration is expected to release a final environmental impact statement in December or January. The report could either require design changes or allow the project to go forward. The city hopes to start construction in May 2021.

Litsios, the longtime Barriers skater, lamented that his beloved skate park's demise is a consequence of Burlington's development. That's led the proverbial fences to get taller and people to treat each other like business partners instead of neighbors. The quarter-pipe debacle illustrated that firsthand.

"We start losing the value that spaces like these bring to the community," he said. "It's a sad thing to see."

The original print version of this article was headlined "Pipe Down | Bureaucracy, construction threaten a beloved Burlington skate spot"