Bump on a Blog: Tween Embarrassment 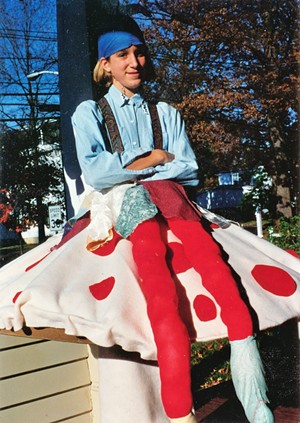 n seventh grade, I was invited to a Halloween party. This (at right) is what I wore.

I spent weeks working on my pixie-on-a-toadstool costume and could not wait to unveil it at the soiree. I fashioned the toadstool from cardboard covered in soft felt and held it up around my waist with suspenders. My real legs were hidden in the toadstool trunk; my stuffed pixie legs attached beneath a dainty flower-petal skirt.

This was going to be the party of the year. My friend Suzanne had invited nearly everyone in our class, boys and girls. I wanted to make an impression.

My mom drove me to the party that day. I wore the pixie half of the costume. Then, before getting out of our van at Suzanne's house, I slipped into the toadstool so I could make my entrance in full regalia.

I stepped onto the lawn and looked around in horror: No one else was wearing a costume. Worse, they were all dolled up in their cutest, flirtiest, most teenager-y outfits. I was mortified.

I recently revisited the sting of that tween embarrassment when my mom sent me this photo. I'd asked her to dig up some pictures of me from the mid-90s because I was writing about my 13-year-old self in my editor's note for this month's Kids VT.

Seeing that little girl in the toadstool costume made me think about one of my biggest parenting fears: Someday I'll have to watch helplessly as my daughter endures the routine humiliations of growing up.[jump]

I asked my mom if she remembered the toadstool incident. Had she felt my embarrassment as acutely as I had? "Oh yeah," she said. "There was a look on your face, which I could read, that was total mortification. But you handled it really well. You didn't throw a fit, and you didn't say 'Take me home.' I think the only one who was aware of your embarrassment was me." Apparently, I quickly shed the toadstool and fake legs, took off the pixie headband and walked right back into the party. (I'm hoping I also had the sense to unbutton the top button of that shirt so as to save myself from looking like a complete dweeb.)

I can only imagine how wrenching it is to watch your kid feel embarrassed, or belittled, or hurt. My mom said she felt similarly powerless when my older brother was bullied in middle school. When your kid suffers, she told me, "You are them. That's what empathy is. You, in that moment, are in their skin. And you're dying just as much. And your next instinct is to fix it. And sometimes 'fixing it' makes it worse."

My baby's tween years feel eons away. But someday I'll be the one who has to tell her everything's going to be OK. I'll have to watch as she brushes herself off and tries again. Any tips, parents, for dealing with these tricky situations?