Bump on a Blog: Sex Ed 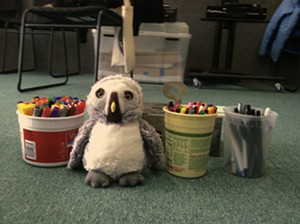 I remember very little about middle-school sex ed. My gym teacher, Mr. Leto, taught the class, and I vaguely recall cringing as he rolled a condom onto a banana. One day, his assistant, Mrs. Waddams, took us girls to a separate room so we could learn about menstruation. She gave us each a few pads and a stick of deodorant and sent us on our way.

I'm sure there was more, but I've blacked it out.

"I remember loving the slideshow for its graphic depictions of naked ladies," he says. "I also remember being annoyed that we saw the boy version and the girl version back to back, and they were identical stories: 'Fred was alone in his bedroom one day when he started to get a powerful feeling… Betsy was alone in her bedroom one day when she started to get a powerful feeling…'

"Oh, and we saw a penis-mounted camera going on the most captivating adventure into a vagina. It was crazy. It blew my little mind," he continues. "I remember loving that I got to skip the boring version of sex-ed at the middle school because I had taken the 'advanced' course at the UU church."

The UU program has tamed a bit since the mid-'90s. The current curriculum, Our Whole Lives (OWL) — which was developed in collaboration with the United Church of Christ — is built around the idea that well-informed kids make healthier choices about sex and relationships. They replaced the graphic slideshows with intriguing drawings. Classes address a set of core values: self-worth, sexual health, responsibility, justice and inclusivity.

This past Sunday, I was invited to the Champlain Valley Unitarian Universalist Society's OWL class in Middlebury, where the kids were learning about pregnancy. I was the real, live pregnant lady they could ogle. Daniel came along to offer the partner perspective. We joined certified professional midwife Chenoa Hamilton, and maternal-child-health nurse Val Ortiz for two hours in the basement of the Mary Johnson Children's Center.
[jump]
The kids, ages 12 through 15, were surprisingly mature. I had expected more snickering, less eye contact. But they listened attentively as Daniel and I talked about planning to have a baby. Amazingly, they managed to keep it together even when Hamilton started talking about how stimulating a laboring woman's nipples can speed the birth process along.

And they weren't shy about asking questions. One girl, whose family raises sheep, asked if people's placentas are delivered the way sheep placentas are. "We usually wait about 24 hours for it to come out," she said. "We start to worry after 36."

Sheep, she added matter-of-factly, almost always eat their own placentas. This sparked a fun conversation.

One boy said that he knows someone whose placenta is buried in the backyard. Another said that his mom saved his cord blood in case he ever needed it later in life. "It's in a lab in Florida now," he offered. Another boy shared excitedly, "My friend has his placenta in his freezer, and I've seen it!"

Alisa Breau, who teaches the class, said later that the kids have loosened up quite a bit since they began the program back in September. They used to giggle at every mention of a penis or vagina. A few months in, she said, they were suddenly asking her bold questions such as, "What are the 10 most common fetishes?"

At the end of the class — after Hamilton held a fetal Doppler to my belly so the kids could hear my baby's heartbeat — we watched a video of a woman giving birth. Here was the awkward sex-ed vibe I remember.

The laboring woman moaned, grunted and let out a primal wail as the baby slowly emerged from her vagina. The camera was zoomed in close on her crotch, but her lower half was submerged in a birthing tub, so thankfully (for the kids, many of whom were now rocking awkwardly in their chairs and trying to look away), the gruesomest details were blurred and watery.

Finally, the baby slipped out, and a midwife placed it, all whitish-blue and chalky, on the mama's naked chest. Daniel was riveted. I was teary eyed and so were the midwife, nurse and class instructor, all of whom have given birth before. The kids, on the other hand, looked freaked. Two boys glanced at each other with horror as the placenta flopped out like a wet lasagna.

After the video, Hamilton asked if the kids had any more questions — nobody did. She suggested that now that they'd seen a real birth, they should be skeptical of what they see in movies and TV. Those depictions of labor and delivery are overblown for dramatic effect. Real births aren't usually an emergency, and they're rarely as scary as movies make them seem.

The kids weren't convinced. "This seemed a lot worse," one boy said.

Pretty good birth control, if you ask me.