Bump on a Blog: 28 Weeks Later 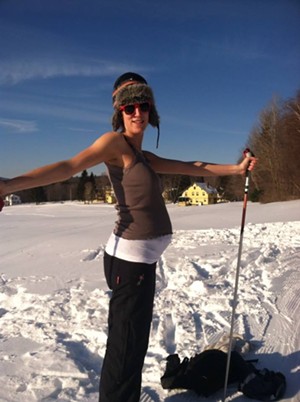 OK, people. It's been 28 weeks. I have officially begun the third trimester. The bump is growing. The kicks are intensifying. Sometimes, when I look down at my shape-shifting belly while the baby is squirming, I feel like the guy in Alien just before the hideous beast bursts from his chest. It's that freaky.

I intended to write about daycare today. The plan was to start researching post-maternity-leave options over the weekend. But I took one look at this overwhelming website — which lists hundreds of childcare providers throughout the state — and wanted to collapse in a heap on the floor.

Instead, I went cross-country skiing.

Every week on this blog, I fight the urge to simply catalog my latest pregnancy woes. But today, in the name of presenting an accurate portrait of pregnancy — and despite the cheery skiing photo — I'm giving in to temptation.

I feel like a zombie. Last night was an insomnia horror show. I watched the minutes tick by while I flopped from side to side, arranging and rearranging my assortment of between-the-legs and under-the-belly pillows. The air in my apartment was so dry it felt like I was inhaling broken glass.

Staying awake all night makes me hungry, and hunger makes me nauseated. So I ransacked the fridge for suitable snacks. Nothing satisfied me; it just gave me heartburn. So I sucked down some Tums and went back to bed. Finally, around 6 a.m. I nodded off into a hyper-vivid pregnancy dream in which I cowered in a corner as a guest at my wedding threw a punch at my giant belly.

I awoke an hour later with a full-blown head cold.

I know, I know: All this is preparing me for the exhaustion of raising a child. But that doesn't make it any easier. This baby-making business is no joke.