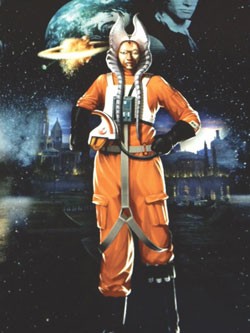 I didn’t know I wanted to be a fighter pilot. That is, not until I went to see “Star Wars Identities” in Montréal last Saturday. Choosing an occupation was just one of the decisions that I, my four male companions — including two 9-year-old boys — and a horde of other participants made as we created our own characters in this ambitious touring exhibit. Part spectacle and part infotainment, “Identities” is also a high-concept, high-tech morality meter.

The interactive exhibit presents a fascinating, behind-the-scenes look at the characters, costumes, sets and production arcana of George Lucas’ crazy-popular film series. Like, did you know that Yoda’s eyes were modeled on those of Albert Einstein? That Lucas considered making Luke Skywalker a female (and then just added Princess Leia to the story)? That the filmmaker modeled Chewbacca after his own shaggy dog? That the shape of Han Solo’s Millennium Falcon was inspired by a humble hamburger?

Walking through the maze of displays — which make two hours fly at warp speed — you encounter such familiar sights as the actual Darth Vader outfit, Anakin Skywalker’s Podracer and models of the bizarre creatures that populate Tatooine and other planets. Even those who may have pooh-poohed the films’ bellicose storyline, or at least the cult of adoring Star Wars geeks, can find much to marvel at here: beautiful, original drawings and paintings by Ralph McQuarrie, designer of the original Star Wars trilogy (who died in March). Captivating, educational presentations on genetics, neurobiology, robotics and more. Example after example of the Lucasfilm crew’s creative genius.

Passively witnessing all this would be worth the price of admission, but “Star Wars Identities” has another, rather brilliant component. Asking, “What forces shape you?” the exhibit invites you not only to invent a character but to examine, essentially, what you’re made of. The choices you are asked to make, and the Yoda-esque lessons along the way, come this close to preachiness — Star Wars is, after all, a classic story of good versus evil. But there’s no denying that making yourself into a fantastical being is just plain fun, with or without any “meta” musing. Plus, George Lucas has clearly grasped the self-centricity of humans — and, apparently, of all those other creatures in his universe.

The show cleverly and immediately latches on to viewers’ self-preoccupation, enticing them to “discover the hero inside yourself.” When you enter the exhibit at the Science Centre on Montréal’s waterfront, you’re given a headset for the sound portions of the show — it automatically picks up when you step in front of informative displays — and an electronic bracelet with which you can scan your answers to some surprisingly probing, multiple-choice questions at 10 different stations.

But first, you register your name (mine: Xania) and choose your gender (female); your race from a Star Wars assortment (Togruta); and your planet of origin (Naboo). (And yes, zealous fans, I know the Togruta are from Shili; I liked Naboo better, OK?) As you pass through the exhibit, other stations request such details as how you were raised (parenting style); which intellectual, spiritual and physical abilities you have; your talents, and so on. The bracelet compiles your answers into a big reveal at the end, which I’m not going to spoil here. Let’s just say my avatar is awesome.

Later, over lunch at a French café, I asked 9-year-old Ben and Andrei what they liked best about “Star Wars Identities.” Both agreed that making your own character was really cool. (They both became Jedi knights.) The boys also liked the technology, especially the bracelets. “It’s like a force field!” observed Andrei. And what did the exhibit teach us?

“To trust your instincts,” said Andrei.

“The good and evil stuff — to make the right choices,” offered Ben. Then they fell into a discussion of which movies in the series they preferred. The grown-ups chose to consider instead the merits of our lunches.

No question, though, that the Force remained with us, at least for the rest of the day.

“Star Wars Identities,” daily through September 16 at the Montréal Science Centre. It’s advisable to buy tickets online in advance and choose a time slot for arrival. $13.50/20/23 (family $63). Note: Bringing your light saber or other replica weapons is forbidden.