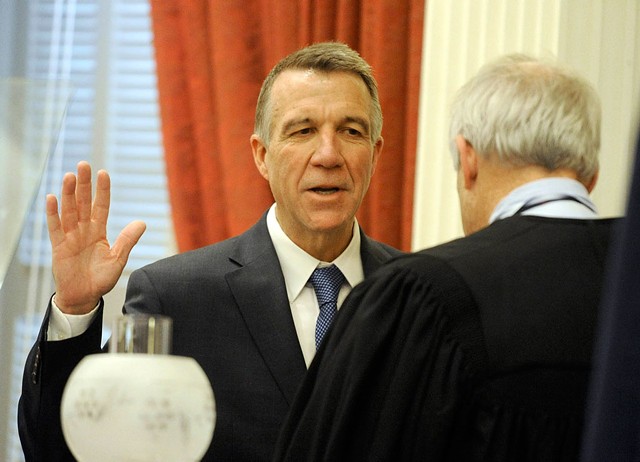 Much of the attention on Gov. Phil Scott's budget has centered on his proposal to force public school districts across the state to level-fund their spending.

In all the school-funding hoopla, some other items have flown under the radar. And, boy, have we got a couple of doozies to tell you about.

The first is a $12 million property tax cut for businesses and second homes — not primary residences. The second is a sales-tax holiday on energy-efficient purchases, which would be funded by a raid on the agency that, um, promotes energy efficiency.

The governor's tax plan would force schools to save money, but the bulk of the proceeds would be spent on other programs. There's no actual property tax relief in his plan.

With one exception: a $12 million cut for nonresidential property owners — those who hold commercial, rental or vacation property.

This little perk was in Scott's budget from the start, but it only recently came to light.

"It wasn't apparent from the early presentations on the governor's proposed budget," says Rep. Janet Ancel (D-Calais), chair of the tax-writing House Ways and Means Committee. "It was highlighted for us [about two weeks ago] by the Joint Fiscal Office." That's the legislature's in-house staff of analysts and economists.

Ancel noted that the $12 million in question has to come from somewhere. Since the governor's projected school savings are extremely unlikely to be realized, cutting nonresidential taxes would put more of the burden on the other two classes of property taxpayers: homeowners who pay full freight and those whose income is factored into their tax bills. Retirees, for instance.

For years now, Ancel says, the legislature has tried "to keep the relationship among the three classes of taxpayers constant, and this violates that [principle] right out of the gate. It's a big decision to make, and there would need to be a rationale behind it."

Over to you, Team Scott. Rationale, please?

"I would have to go back to the tax department," says Administration Secretary Susanne Young. "I don't have that level of detail in front of me."

The reasoning behind a $12 million policy decision is a "detail"?

And how likely is it, pray tell, that the Department of Taxes made that policy choice on its own?

"I'm sure we'll be discussing ideas with the legislature over how we can achieve the goal of reducing expenditures," she says. "If not by level funding, then with other potential sources of savings."

The second budgetary Easter egg is the flip side of Scott's plan for a sales-tax holiday on energy-efficient vehicles and products. He touted that measure in his budget address — but nowhere did he mention how he would pay for it.

And the answer is ... he'd take the money from Efficiency Vermont, the ratepayer-funded utility that encourages energy savings and efficient technologies.

According to Young, the idea makes perfect sense.

"Efficiency Vermont has a long history of supporting incentives for electric efficiency," she says, "so I think providing these incentives is consistent with that."

"This appears to be reaching into the process and undermining it." Abby White tweet this

Young adds, "Efficiency Vermont is working with us to make this happen."

Perhaps. But Efficiency Vermont doesn't seem happy about it.

"Quite a bit of rigor and analysis goes into the process to ensure that our work is done at the least cost and creates the most benefit," says Efficiency Vermont spokesperson Abby White. "It's not clear to us that a sales-tax holiday will achieve those goals. This appears to be reaching into the process and undermining it."

The holiday would encompass the first 17 days in September. It would apply to purchases of electric or hybrid vehicles and energy-efficient electric appliances.

That's a long time for a tax holiday, and it covers a lot of ground. Did you know, for instance, that there are hybrid and electric-powered industrial vehicles and heavy machinery? Imagine if large businesses decided to upgrade their fleets during the tax holiday. Or if, just spitballing here, a road construction firm heavily mortgaged by the governor took advantage of the tax holiday to buy some hybrid equipment?

This could be a costly proposition for a nonprofit's budget. Young could not provide even a ballpark estimate for the tax holiday's impact on Efficiency Vermont.

The proposal is attached to two pieces of legislation: A bill sponsored by three House Republicans would establish the full tax holiday, and a Senate bill would apply the holiday only to energy-efficient appliances, not vehicles.

Either way, the whole idea seems like an exercise in robbing Peter to pay ... Peter.

A few weeks ago, Senate President Pro Tempore Tim Ashe (D/P-Chittenden) was curious about the financial status of other states around the country, just to gain some context on Vermont's situation.

"I literally googled 'governor budget gap,'" he recalls. "And I quickly saw that a number of other states, whether red or blue, are facing significant financial challenges. Which suggests that, in the challenges we face, we are certainly not alone."

Ashe then sought a more systematic effort, undertaken by the Legislative Council — the lawyers and researchers who work for Vermont lawmakers — to compile a rundown of state budgetary situations.

The conclusion: A lot of states are in real trouble, often much worse than Vermont.

This state's budget gap, bad as it is, sits around $70 million. With an annual budget of close to $6 billion, the gap is barely more than 1 percent.

At least 25 states have bigger budget gaps than Vermont, as a percentage of total expenditures. With many others it's hard to tell, because states that require a balanced budget often adopt the polite fiction that there is no budget gap since they fully intend to close it.

The list of the fiscally troubled is truly a mixed bag. Deep red states such as South Carolina, Alabama, Nebraska and Oklahoma are well represented. But so are blue states, such as Connecticut, Delaware, Massachusetts and New York.

There is one consistent thread. States that have thrown themselves into tax-cutting experimentation, including Kansas and Louisiana, have failed to realize an expected growth surge. The result is massive deficits and unpopular cuts in government programs.

Not all state fiscal pictures are comparable. But Ashe's list shows one thing clearly: "It's not that we have singularly taken actions that have created a budget gap," Ashe says. "In fact, we are standing shoulder-to-shoulder with legislators of all parties around the country."

Just imagine. All this state budget turmoil, and the Age of Trump has barely begun.

Professional journalists usually avoid the spotlight. They are ethically bound to stay out of public policy debates to avoid the appearance of bias.

But sometimes they're the only ones who can make an argument.

Such was the case last Thursday, when members of the media testified before the Senate Government Operations Committee about the need for a "shield law" to protect journalists from having to reveal their sources and raw materials.

"We, as reporters, have fewer legal protections than I certainly realized," Paul Heintz, Seven Days political editor and Vermont Press Association board member, told the panel.

Heintz, along with Seven Days colleagues Mark Davis and Matthew Roy, were subpoenaed in November 2015 by a Franklin County prosecutor seeking information on then-senator Norm McAllister, who was under investigation for sexual assault. Vermont Public Radio reporter Peter Hirschfeld was later subpoenaed.

Roy's summons was quickly dropped; Heintz's was dismissed by a judge in January 2016. Davis and Hirschfeld continued to fight the subpoenas until prosecutors dropped the charges against McAllister suddenly in June. Seven Days paid legal bills to the tune of $15,000.

According to the Reporters Committee for Freedom of the Press, Vermont is one of only 10 states without a shield law, which would have protected the journalists from prosecutorial pursuit — and potential jail time.

"My choice at the end of the day for, frankly, doing my job, was to essentially go to jail or betray my responsibilities," Davis told the committee. "At the very last minute, thanks to a twist that had nothing to do with me, I did not have to make that choice."

But the reporters were less concerned with their own situations than with the chilling effect on their professional mission: the search for truth.

"This isn't just about us, it's about our sources," Heintz testified. "Whistleblowers, victims of crime, those who may be falsely accused of a crime — anyone who comes to us, who think their livelihoods might be compromised if their identity is revealed. Without this protection, people won't come to us anymore."

The Vermont Press Association has joined forces on this issue with an ad hoc group of reporters organized by, among others, independent journalist Hilary Niles and former Associated Press reporter Dave Gram.

The VPA and its allies are working with Sears and White to tighten the language of the bill. Further testimony will be taken this week; witnesses will include a representative of the judiciary. Prosecutors have yet to weigh in. The reporters are hoping the bill will pass the Senate before the "crossover deadline," when bills must be passed by one body in order to be considered by the other this year.

This advocacy push by Vermont journalists won't end with a shield law. The VPA and the independent group plan to push for reforms to other laws that affect journalism, including Vermont's public records law.

It's an unusual, uncomfortable position for journalists to be in. But, as Niles told the committee, "It's about preserving the role of journalism in society."

These days, that feels more important than ever.