If you feel shaken by the idea of spending a lot on holiday gifts and you're stirred by the prospect of making stuff from scratch, we have just the thing: cocktail kits. Package up a homemade infused liquor, a jar of simple syrup, a garnish, and a salt or sugar mixture for the rim and give your friends a gift they'll never forget.

For the past few years, I've been gifting unusual simple syrups and salt or sugar blends, all made with ingredients I've grown or foraged, such as yellow birch, nasturtium, lilac and basil.

For more ideas, I turned to Nicholas Capanna of Rutland, owner of the education and consulting business Little House of Cocktails. Capanna has worked in the food industry since his teenage years and started tending bar in college. He's currently the bar director at Au Comptoir, a cocktail and mocktail bar in Woodstock, where he crafts classic and new drinks from freshly pressed juices, fine liquors, housemade syrups and elegant garnishes.

Read on for homemade gift ideas that are perfect for the cocktail lover in your life. These can be given individually or combined into a kit so that the recipient has everything they need to mix up a one-of-a-kind creation.

If you've ever had vanilla vodka, coffee stout or sangria, you've consumed an infusion. To make one at home, you steep a solid in a liquid, wait until the liquid tastes like whatever you've added to it and strain. Easy!

Because alcohol is a solvent, it's the perfect base for infusions, but nonalcoholic beverages such as apple cider or cranberry juice can also work.

When Capanna makes an infused liquor to give as a gift, he tailors it to the recipient's preferences. Have a friend who likes apple pie? Make them some brown sugar, apple and cinnamon vodka. Do they prefer pecans? You can pour bourbon over roasted nuts to make a rich, toasty spirit that's perfect for winter. Capanna likes to sweeten his creations so that they can be used as cocktail ingredients or stand-alone sippers.

Formula: Combine base liquor and flavoring ingredients and let sit for at least two days, or as long as a week. Taste daily and adjust ingredients as desired. When the liquor is as flavorful as you wish, pour the mixture through a fine mesh strainer (or a coffee filter, if your ingredients are very fine); sweeten with plain or flavored simple syrup, maple or honey; and bottle the result. Capanna likes to use "some kind of upcycled bottle and cork combination that is aesthetically pleasing." 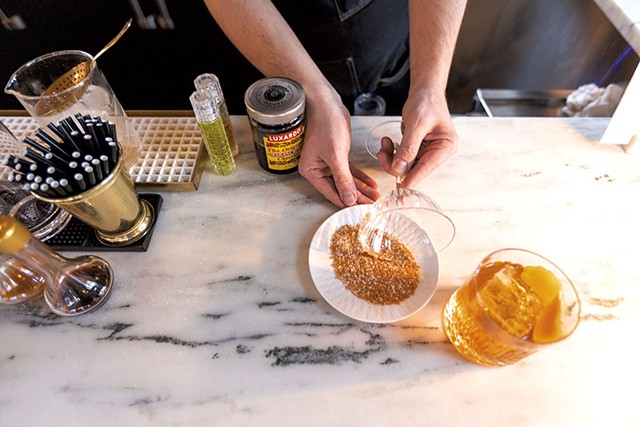 Simple syrups are available in stores, but they're incredibly easy to make at home, and the flavor combos are endless. A regular-strength simple syrup is equal parts sugar and water. A rich simple syrup, which has a longer shelf life and doesn't dilute drinks as much, is two parts sugar and one part water. Because you want to limit the amount of simple syrup that you add to a drink — typically an ounce of regular simple or two-thirds of an ounce of rich simple — the trick is packing lots of fabulous flavor into every spoonful.

Capanna and I like using foraged ingredients in our syrups, and in winter we both use needles from conifer trees. He suggests white pine — and making sure that you have an experienced forager with you when you harvest. I like to combine balsam fir needles and fresh cranberries for an ultra-Christmasy vibe. Spruce has a great flavor, too.

Formula: Combine sugar and water in a heavy saucepan, stir, and bring to a simmer. To make a rich simple, use two cups of sugar for each cup of water.

If your flavoring ingredients are delicate, such as leafy herbs or flowers, stir again to make sure the sugar has dissolved, remove the simmering syrup from the heat, add the ingredients and steep until the syrup is cool. If your ingredients have more substance, allow them to simmer in the syrup for a few minutes before turning off the heat and letting the mixture cool. (Simmering thickens the syrup, so you can compensate by starting with a little extra water.)

Remember, you want to add flavor without making the drink too sweet, so syrups should be pretty punchy. Strain, bottle and keep refrigerated. 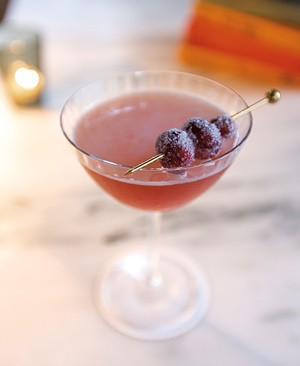 If you don't have $25 to drop on a cocktail garnish, you can make your own delicious version by combining dried cherries and vodka and flavoring them with vanilla or almond extract. They won't look or taste as rich as Luxardo cherries, but they won't contain red dye, either.

Formula: Pack dried cherries into a mason jar and cover with a vodka that is good quality but not super pricey. Add a few drops of almond or vanilla extract to taste. Let steep for a day or two before using as a drink garnish.

Flavor ideas: You can use any liquor and dried fruit combo you like. Scotch and apricots and rum and pineapple are good places to start.

We're used to seeing margarita glasses dipped in salt, but many drinks can benefit from a rim crusted with something savory or sweet. Plus, sugar and salt blends look pretty packed in jars and decorated with fabric or ribbons.

Capanna likes adding flower petals and herbs to salt and grinding the mixture with a mortar and pestle. For sweet drinks, he might use sugar mixed with lemon zest or cinnamon, with a pinch of salt for balance.

To apply a sweet or salty rim to your glass, roll its outside edge in liquid — you can use water or get creative and try citrus juice, olive juice, tea or a spirit — and then roll it in your sugar or salt blend. Try to keep the mixture on the outside of the glass, not on the actual edge.

For even more flair, you can paint a design on the glass with simple syrup, Capanna said, and sprinkle the mixture onto it, like a "grade school art project."

The original print version of this article was headlined "Mixing It Up | On a budget this holiday season? Try these DIY gift ideas for cocktail fans"