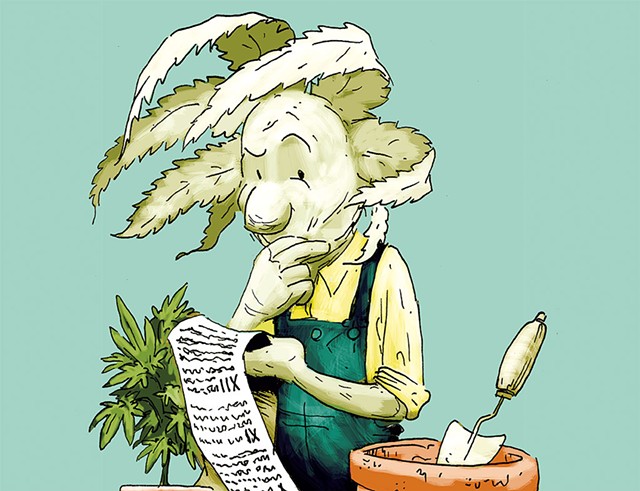 Now that Vermont has legalized the sale of cannabis for recreational use, growers and entrepreneurs can get on with the business of hawking weed, right?

Six months after the passage of the legalization bill, lawmakers are still monkeying with the rules governing Vermont's future ganja marketplace.

Some of the proposed changes are the expected technical tweaks to a complex bill pulled together at the end of a marathon 2020 legislative session dominated by COVID-19 relief efforts. Others could have significant impacts on the businesses hoping to capitalize on recreational weed sales, which are set to begin in 2022.

These changes include proposed rules about advertising, assistance for minority-owned pot businesses and delayed deadlines for towns to decide whether to ban retail sales of the drug within their borders.

The changes are far from assured. The Senate has focused on updating the law, passing S.25 in late March. It's now in the House Government Operations Committee, whose chair, Rep. Sarah Copeland Hanzas (D-Bradford), said she'll be getting to it as soon as the committee finishes work involving pension reform and mail-in voting proposals.

"We're absolutely going to take up the bill," she said. "What I don't know is whether any particular item will have the sense of urgency that it needs to pass at this moment."

The House has its own bill focused on social equity issues, H.414, which hasn't yet made it to a floor vote. So, the smart money in Montpelier is on the Senate bill surviving the legislative gauntlet in some form. Here are a few highlights of S.25.

The bill seeks to help members of minority groups participate in the new recreational marijuana market in two ways. One is to reduce or eliminate licensing fees "for individuals from communities that historically have been disproportionately impacted by cannabis prohibition or individuals directly and personally impacted by cannabis prohibition." The bill tells the three-member Cannabis Control Board to figure out how to untangle that knot.

The other is to establish a Cannabis Social Equity Program that would give money to "social equity applicants" for "ordinary and necessary expenses to start and operate a licensed cannabis establishment." The program would be funded by $500,000 in seed money from the legislature, plus a 3 percent gross sales tax on medical marijuana license holders for the five months these retailers would be allowed to sell recreational marijuana ahead of others. The taxes would be capped at $50,000 per dispensary, of which there are currently five. The program would be run by the Agency of Commerce and Community Development. Eligibility would be established by the Cannabis Control Board advisory committee.

Just who should receive the low-interest loans and grants envisioned by the program has not been determined. Social and racial justice advocates have argued that eligibility should not be defined solely by race or contact with what Mark Hughes called the "so-called criminal justice system."

"We've sought to identify folks as being impacted not solely because they were incarcerated," Hughes, executive director of the racial equity organization Justice for All, told lawmakers.

But Sen. Jeanette White (D-Windham) noted that without explicitly tailoring the money to racial minorities, anyone who ever got popped for pot possession could claim to have suffered and theoretically snag a grant.

"I know a lot of people who were arrested for marijuana, in the '60s and '70s, who are not disproportionately impacted individuals — they came from wealthy families," White said. "There is no way they should be considered."

Sen. Joe Benning (R-Caledonia), an attorney, counted himself among those who had a brush with the law but shouldn't be considered harmed by the experience.

"I personally was arrested in 1975 at a time when I had long hair and played guitar in a rock-and-roll band," Benning said. He noted that it was his pot-smoking bandmates the cops were after, not him.

In the majority of states where recreational marijuana sales are legal, stores can be set up in any city or town unless the community specifically bars them.

Vermont took the opposite approach in last year's law, allowing retail sales only in towns that have voted to permit them. Towns are supposed to make that decision by Town Meeting Day 2022. Because of delays in the formation of the Cannabis Control Board, however, the statewide rules governing the operation of marijuana businesses now aren't due until April 2022.

So S.25 would give cities and towns an additional year to hold a vote after the rules are clear. And instead of allowing retail cannabis sales only in towns that approve them, the bill would instead allow such sales in any community that doesn't ban them by March 8, 2023.

The Vermont League of Cities & Towns, which advocated for the original "opt-in" structure, is now OK with changing to this "opt-out" model because towns will have sufficient time to make up their minds.

"We're not super excited about it," said Gwynn Zakov, the group's lobbyist. "But we're not going to object to it either."

The extension also reflects the reality that COVID-19 made petition drives more difficult and many town leaders did not put the question of whether to allow weed stores on the ballot in March. Of the 26 towns that did vote, Burlington and 22 others said yes.

Benning has long supported the idea that consistency in the state will help the market thrive, and he always thought the default should be that retail sales were allowed until towns said otherwise. But he worried last month that the new opt-out rule might again stir opposition in the House and act as a poison pill preventing the two chambers from reaching a deal.

"Politically it's not clear how much of this survives a journey through the House," Subin said.

Restrictions on cannabis advertising have also resurfaced in S.25. Proposed advertising rules were stripped out of the bill last year after House members sought an outright ban, despite concerns that it would violate businesses' right to free speech.

Following some last-minute legislative wrangling, the final bill remained silent on advertising, but the prospect of a possible ban loomed. This left businesses wondering how they would get the word out about their products. "A lot of business owners are very upset about a total ban. Does that mean no website?" Subin asked.

After officials from the Attorney General's Office told senators they could not defend an outright ban, they reverted to strict rules on advertising, which most business owners are fine with, Subin said.

The bill would restore proposed rules that bar "deceptive, false, or misleading" ads or ones that "promote overconsumption" or represent that cannabis has "curative effects." Also forbidden are ads that show anyone under 21 using cannabis or that are "particularly appealing to persons under 21 years of age." Marketing efforts that involve free samples or prizes and awards are also barred, nor can advertising appear in any media where "more than 15 percent of the audience is reasonably expected to be under 21 years of age."

Ads would need to be approved by the Cannabis Control Board, which could charge fees for the review.

The five existing medical marijuana dispensaries in the state will be eligible to receive something called an integrated license, which would allow them to both grow and sell to recreational users, among other things. Because they already have established businesses, they'll be allowed to start selling five months earlier than other retailers, on May 1, 2022.

To make sure local growers aren't shut out of that early sales boom, S.25 says 25 percent of cannabis flower that integrated license holders offer "shall be obtained from a licensed small [Vermont] cultivator, if available" between August 1, 2022, and October 1, 2022. Other licensees can open their doors on the October date.

But while some small growers may appreciate that opportunity, most won't bother trying to sell through Vermont's existing operations, some of which are connected to big national chains, Geoffrey Pizzutillo predicted.

Pizzutillo, executive director of the Vermont Growers Association, told lawmakers this year that people interested in shopping at such cannabis retailers can already do so in Massachusetts and Maine, and local growers are looking to distinguish themselves from that market channel.

"We're looking for a Vermont brand and to transition Vermonters into the market," he said, so many local growers are planning to wait to sell their crops to locally owned retailers able to operate after October 1, 2022.

Sen. Phil Baruth (D/P-Chittenden) disagreed, predicting that small growers would leap at the chance to sell their products when the markets open.

"Maybe they are much more guided by principle than profit," Baruth said. "But I think these guys have bills to pay, too."