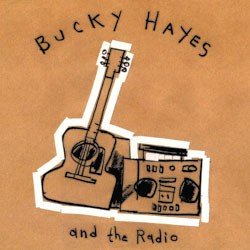 If a tree falls in the woods and no one is there to hear it, does it make a sound? Furthermore, what exactly is the sound of one hand clapping? And if God is omnipotent, could he make a stone so big even he couldn’t lift it? These are questions that have perplexed the world’s great thinkers for millennia. They are also similar to the conundrum that plagues the self-titled debut from Brooklyn’s Bucky Hayes and the Radio, and that vexes music critics tasked with writing about it.

But here, my friends, is the rub: That is also exactly what’s wrong with it.

“Milquetoast” almost seems too exotic a word to use in describing the 10 songs comprising this quartet’s freshman outing. Aggressively uninteresting, the album will offend no one. Conversely, neither will it inspire spirited flights of musical fancy.

Opener “Back in NY” sets the humdrum tone. The bright, bouncy acoustic pop number concerns the creature comforts of domesticity. Hayes’ edgeless ruminations resemble a sort of blissed-out Jack Johnson — hardly known for lyrical grit to begin with — if the surfer-dude-cum-songwriter had OD’ed on Valium. Hayes sings, “What you got on the stove? / Mashed potatoes and gravy. / That’s my favorite dish. / Won’t you fix a plate for me?” I’m reminded of an old-ish saying, “Go big or go home.” Hayes, it seems, prefers the latter.

And that’s fine. The issue is that good art, engaging art, never mind great art, requires risk on the part of the artist. And at virtually no point does Hayes seem ready to take the plunge. Instead, he sits on the dock of the bay and dangles his toes in the water.

Songs such as “Diamonds and Gold,” or “Oh! It’s Love” suggest an inner desire to break the mold and try something new. Sadly, Hayes never quite gets there. His lyrics, while not necessarily contrived, are bland and predictable. So, too, do his melodies, progressions and song structures tread on safe, familiar ground. Again, there’s nothing really wrong with that. But there’s nothing especially right, either.