A wine maven explains what's so special about Champagne 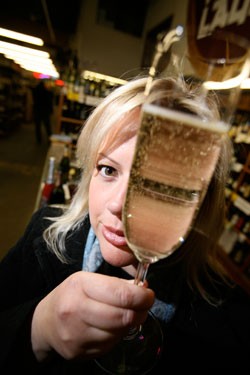 When the countdown to midnight begins on New Year’s Eve, there will be party hats on people’s heads and a few key questions on their minds: Will the economy pick up in 2009? Is there somebody smoochable in the vicinity? Where’s the Champagne?

The host, on the other hand, may be gritting her teeth at the thought of all the $50 bottles she sprang for. Or she could be pouring bargain-basement bubbly stuff and hoping her guests don’t notice it lacks a proud pedigree. After all, not everything that sparkles is from France. Or tastes delightful.

Cruising the aisles of the wine department, holiday shoppers will quickly realize that only a fraction of the bottles contain “real” Champagne. So what on Earth do all those other green glass bulbs hold? Some say “sparkling wine”; others say “Prosecco,” “Sekt” or “Cava.” Without trying a sip, let alone a whole bottle, it’s enough to make one’s head spin.

We aim to clear up some of the confusion with a brief crash course in the facts about fizz.

Like many culinary innovations, effervescent wine was more a lucky accident than an invention: Carbonation results when wine goes in bottles before fermentation is complete. Nonetheless, a Benedictine monk named Dom Perignon — for whom the world-renowned Moët & Chandon Champagne house named one of its most famous fizzies — often gets the credit for “inventing” Champagne.

“Despite what most people think, Dom Perignon didn’t discover Champagne,” dishes Bill O’Connor, the state wine manager for Baker Distributing. “He discovered how to preserve it. How to tie down the corks and how to develop good production and blending principles.”

Why tie down the corks? Before Perignon came on the scene, gassy bottles were prone to premature cork expulsion, and many actually exploded in the wine cellar. Hence, carbonation in wine was initially considered a bad thing. The bubbly stuff was so unstable that it was sometimes called the “devil’s wine,” even though much of it originated in monasteries.

Perignon was originally tasked with figuring out what caused the extra fermentation and eliminating it. Instead, he embraced it, revolutionizing the industry to the delight of many.

“I’m a Champagne-o-phile,” says O’Connor, who can wax eloquent on his favored drink. “I love the . . . beauty that comes out of Champagne. First the smell, then the taste, then the prickle which translates the taste to the palate. Its flavor combines with the smell. Then you get to the finish [i.e., the aftertaste]. You taste the wonderful fruit . . . and the toasty yeast.”

Although one can make drinks fizz in many ways — for instance, by simply injecting carbon dioxide — Champagne producers use a complex set of techniques known as the méthode Champénoise. First, the grapes are pressed and the juice fermented in large barrels. During fermentation, yeast converts sugar into alcohol, and carbon dioxide is released as a byproduct. The wine is bottled with additional yeast and sugar to create a controlled second fermentation that lasts between one and a half and three years, depending on the quality of the grapes.

Historically, the Pinot Meunier grape — named for a “miller’s wife” because the leaves appear to be dusted with flour — has been considered inferior to the other two types, but it has grown in popularity thanks to its heartiness and bold flavors.

In France, when all the grapes used to make a wine come from a single year’s harvest, the bottle bears that year — or “vintage” — marked on its label. Grapes from different years can also be blended to create a “nonvintage” (or undated) version. Most producers of sparkling wine outside of Champagne follow the French lead.

Though many drinkers use “Champagne” as shorthand for any bubbly wine, French law reserves the word for beverages made solely from grapes grown in the Champagne region using the traditional methodology. Wine makers in other countries have to come up with their own terminology. The Spanish call their light, citrus-y quaff “Cava.” In Italy, there’s straw-colored “Prosecco,” which comes in frizzante (lightly sparkling) or spumante (fully sparkling) styles. Germans and Austrians make “Sekt,” which is a bit fruitier — tasting of apples and pears — and usually sweeter than wines from their neighbors to the south.

In the U.S., we keep it simple by calling bubbly “sparkling wine.” American versions tend to be fruitier and bold. According to O’Connor, our homegrown sparklers are “forward, like the American personality.”

Champagne and sparkling wines can feature big or small bubbles, each with their distinctive effects on the mouth feel. Wine producers have secret variations in their production methods that make each sparkling wine distinctive. Fruity flavors range from orchard offerings, such as apples and pears, to tropical lemon and tangerine. “Tart,” “creamy” and “dry” are other words used to describe flavor. Some wines are yeasty (like biscuit dough), some floral, and some have a nutty flavor. Because there are so many options, the best way for novices to find what they’re looking for is to ask a trusted wine seller.

At the Beverage Warehouse in Winooski, owners Jennifer Swiatek and George Bergin are used to offering recommendations, especially to customers curious about the less celebrated sparklers. “More and more people are coming in and saying, ‘We are on a budget this year,’” says Swiatek. She adds that people who used to go for $40 bottles of Champagne are currently more likely to opt for a couple of bottles of Prosecco, which sells for $15 on average. “Right now, Prosecco is the strongest-selling category in the store,” she admits.

Bergin says his number-one seller is Val d’Oca, an extra-dry Prosecco that goes for $15.99. “It doesn’t have the roughness of a Brut,” he says. His other under-$20 recommendation is Roger Goulart Cava. “Forget that it’s Cava,” he advises. “It’s champagne from Spain.”

Another way to get bang for your buck is to sweeten the deal with mixers. “People are really digging the $7 to $10 champagnes to make punch or cocktails with,” says Swiatek. Recipes abound on the Internet. Bergin mentions that those who don’t want to risk the DIY approach can purchase a pre-made version called Mimosa — a blood-orange and Prosecco blend — from a company called Canella. “The color is a little frightening. [But] it’s just tasty,” Bergin assures. “They have done all the work for you.”

What are some other ways to make spirits buoyant this year without splurging on Dom or Veuve Clicquot? Based on my own 16 years’ experience in the food and beverage industry, I can say one of my favorite sparkling varieties is the Roederer Estate Anderson Valley Brut nonvintage ($25.99). This wine is crisp, with elegant flavors of spice combined with pear and hazelnut. My other recommendation is the Gruet Brut nonvintage ($16.99), made outside Albuquerque, New Mexico. It tastes of green apples and grapefruit, with an ultra-fine bubble.

There are plenty of great tastes to celebrate, even on a budget. Now go get your bubble on.

Most bottle labels indicate how sweet or dry the wine will be. Here are some terms to look for:

From The Beverage Warehouse in Winooski

Combine the liquids in a fluted wine glass. Add more Cassis if desired.

Mix ingredients in a shaker with ice. Shake gently. Strain into a champagne flute.