Bubble Soccer Puts a Bounce in the Game 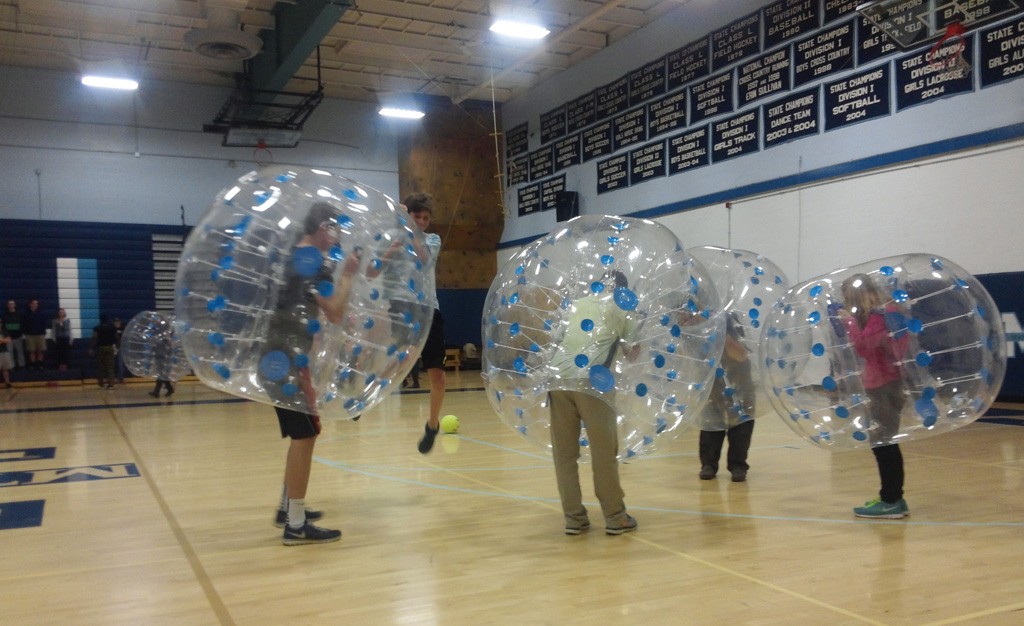 Squint just a little, and it's easy to imagine that the colorful, bulbous creatures bouncing around the large room are tiny organisms on a microscope slide, little amoebae and volvox colonies careening every which way. That vision is quickly shattered by shrieks of joy and a repeated squishy noise akin to the wheezy grunt of a bouncy castle that's seen one too many busloads of fourth graders.

There is no denying the fundamental strangeness of bubble soccer.

The day after the area's first notable snowfall, a large group of students at Jericho's Mount Mansfield Union High School gather in the school gym to climb inside giant, inflatable bubbles and, ostensibly, kick a ball into a small goal. While they may have opted to play bubble soccer for its novelty value, they soon discover the true appeal of the game: When you're protected by a tough, 5-foot-diameter inflatable sphere, it's really fun to barrel into other people.

The 90-odd MMU students are here as part of an all-day program called "extended advisory," which occurs once per semester. (Advisory is a year-round program that fosters the creation of peer groups.) It's a kind of supervised day of recreation and bonding when students, faculty and staff participate in a variety of activities outside the classroom. When Seven Days shows up at the school, the members of one group are noshing on snacks as they watch the Will Ferrell comedy The Other Guys on a big screen; others clamber into buses bound for a day of cross-cultural enrichment in Montréal.

David Alofsin, 35, is a business teacher and internship coordinator at MMU; he's also a team-sports enthusiast and one of Vermont's ambassadors for this athletic oddity. His organization, Vermont Bubble Soccer, owns 30 heavy-duty bubble-soccer bubbles, which Alofsin offers for rental through a sports and recreation company called Game On VT. He's made 20 of the bubbles available to MMU students today.

Isaiah Gilbert, a senior from Huntington, has seen a few bubble-soccer videos online. (Jimmy Fallon's goofy experiment with the game back in February comes up often in conversation with students.) His advisory group thought the activity looked like fun; the clincher came, Gilbert says, when students learned that Alofsin had bubbles at the ready. "As soon as bubble soccer was mentioned," he says, "everybody was just like, Man, we gotta do that!"

Partitioned in half by a movable wall, the school's gym affords space for two small bubble-soccer playfields, each of which accommodates a five-on-five match: blue-spotted versus red-spotted bubbles. The games have two seven-minute halves and, other than "no hits from behind," few rules. No one plays any particular position, and certainly no offensive or defensive strategizing goes on. If a goal is scored, it's usually due to a chance carom. No one seems to mind, one way or the other. The players are here to hang out with — and bounce into — their friends and teachers. 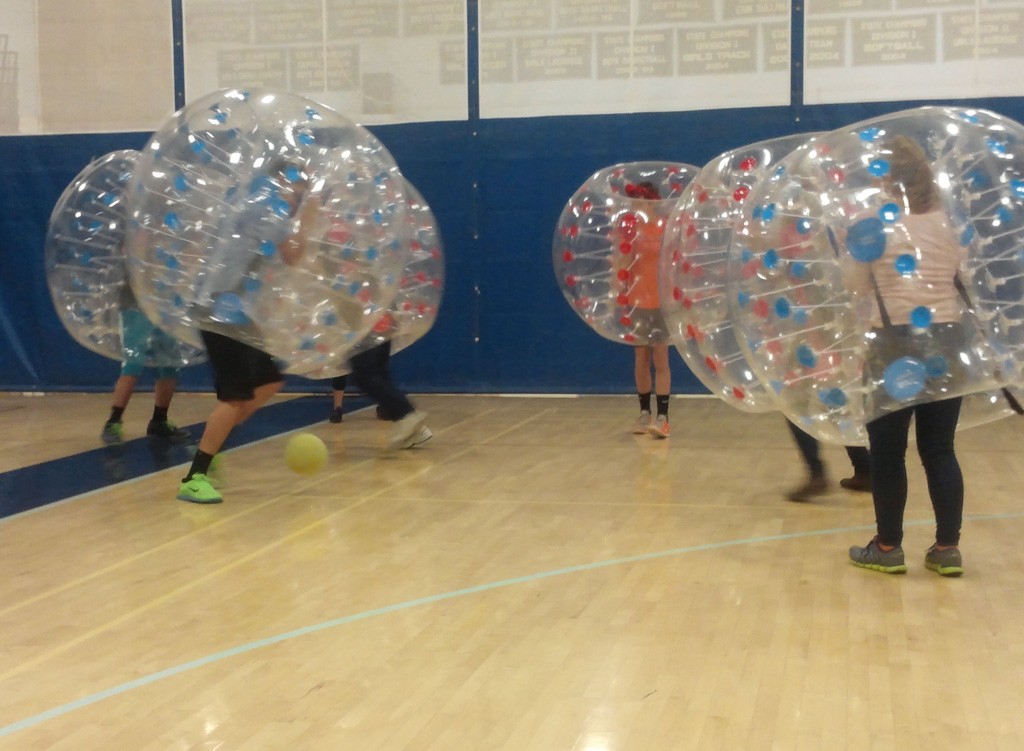 Not only are the collisions fun, they're pretty much the only option once someone is inside a bubble. Even David Beckham would have had a hard time scoring a goal while ensconced in one of these things. Though they are transparent, the bubbles' resilient plastic shells reflect light in weird ways. Since the bubbles also muffle sound surprisingly well — and since one's sense of smell isn't of much use in a bubble-soccer game — every player is at an equal sensory disadvantage. All of which makes for a greater number of bouncy, enjoyable crashes.

Each pillowy, spherical bubble surrounds a cylindrical chamber into which the player pulls him- or herself by means of firmly affixed handgrips. With arms through the shoulder straps, the player "steers" by clutching the chest-height handles. The bubbles are filled with air, but, as Alofsin informs the students before play begins, they aren't exactly airy, weighing in at 25 pounds each. "You will feel it," he tells them.

He's not kidding. Bubble soccer turns out to be a good, if unstructured, workout, evidenced by the condensation that soon collects on the bubbles' interior surfaces (clouding players' vision even more).

Sophomore Kathleen Gembczynski is a three-sport athlete who's on a brief athletic hiatus. She's keen, she says, to get inside a bubble for a bit of semi-organized sportive silliness "before [she] can sit on the couch for two weeks" as she waits for the next season to begin.

Boys and girls from all grades participate, so some of the smaller girls, including sophomore Arianna Belfield, inevitably find themselves launched across the room by large, overeager junior and senior boys. Alofsin says one of the advantages of bubble soccer in this setting is that it levels the playing field to some extent. "You're wrapped in a bubble with not-great visibility, and your feet don't do what they normally might if you're trying to kick a ball," he says. "And then you get knocked over and it's hard to get up."

Most kids have smiles on their faces before, during and after the games. And even though collisions leave a few students shaken up, no one gets hurt. Some students take advantage of pauses in game play to explore other avenues of the bubbles' potential. One good-natured, lanky young man quickly figures out that the bouncy spheres make for risk-free somersaulting, so he amuses himself (and onlookers) by tumbling head-over-heels all over the court.

The zaniness in the MMU gym is, Alofsin says, Vermont Bubble Soccer's first true event, and he deems it a success. "Any time you can get 90 kids in a room and have it work out, that's fantastic," he says.

Alofsin has no interest in setting up a bubble-soccer league, especially since that local niche is currently filled by an organization called PLAY Bubble Soccer, which holds games in Burlington's Robert Miller Community & Recreation Center. Instead, he says, he'll rent out his bubbles for one-time events; he's already been approached about a fundraiser and, believe it or not, a wedding.

For a "sport" that was only recently invented, bubble soccer has surprisingly vague origins. The plausibly reliable website bubble-soccer.us holds that the game was invented by a couple of Norwegians in 2011, but it's difficult to confirm. Still, the game's balance of whimsy and competition has generated international interest.

Alofsin calls himself a competitive person, but he gravitates toward bowling, Wiffle ball and bubble soccer rather than football or basketball. Major competitive sports are great, but "a backyard game like KanJam [a Frisbee game similar to disc golf] is the simplest thing in the world, but you can hang out for hours playing it," he says. "It's competitive, but not in the same way that a football game might get competitive. It's more collegial."

His students may agree with him, but it's also clear that, for some of them, the appeal of bubble soccer is even more straightforward. Shortly after his first excursion inside a bubble, senior Ben Kleptz reports, with no malice whatsoever, that the most fun part of the game is "hitting other people." He quickly bubbles up for another round.